Gainsborough Trinity secured a one-nil victory at home to Workington AFC on Saturday afternoon as the Holy Blues continue to ramp up their pre-season programme. A fine strike from midfielder Luke Lofts on the brink of half time was enough to separate the two sides over the course of the 90 minutes as Trinity held onto their narrow lead with resolute defending throughout. Trinity came into the fixture having suffered a loss at the hands of Rotherham four days prior whilst Workington entered the match on a high after a 6-0 victory. Trinity, however, were boosted by the return of Dec Bacon who was able to recover from a hamstring injury in time for the fixture.

As fans watched on at the Northolme for the first time since the beginning of March, it was Workington who made the more controlled and asserted start to the game as they dominated the possession for the opening stages. The first goalkeeper called into action for either side was Trinity’s Tom Jackson who needed to make a lunging save down to his left to deny Workington’s Bradley Carroll from long range after only 6 minutes.

Ten minutes later and it was Jim Atkinson in between the Workington posts who was called into action. A fine Trinity move found Matty Dixon with space and time in an advanced full back position to fire a cross in towards the head of Gregg Smith. The Trinity number nine dived to meet the ball 6-yards out, however Atkinson’s reflexes were sharp, allowing him to turn the ball around the post.

The remainder of the half saw Workington dominate the ball but fail to create very little trouble for the Trinity defence. Their most notable effort followed a clever set-piece routine in which the ball was chipped over the top of the Trinity wall, however the preceding effort was denied by the woodwork and cleared by the Trinity defence. Some clever footwork from visiting forward Reuben Jerome in the Trinity area appeared to create another good opening for Workington, however his finish was left wanting as he fired well wide of th 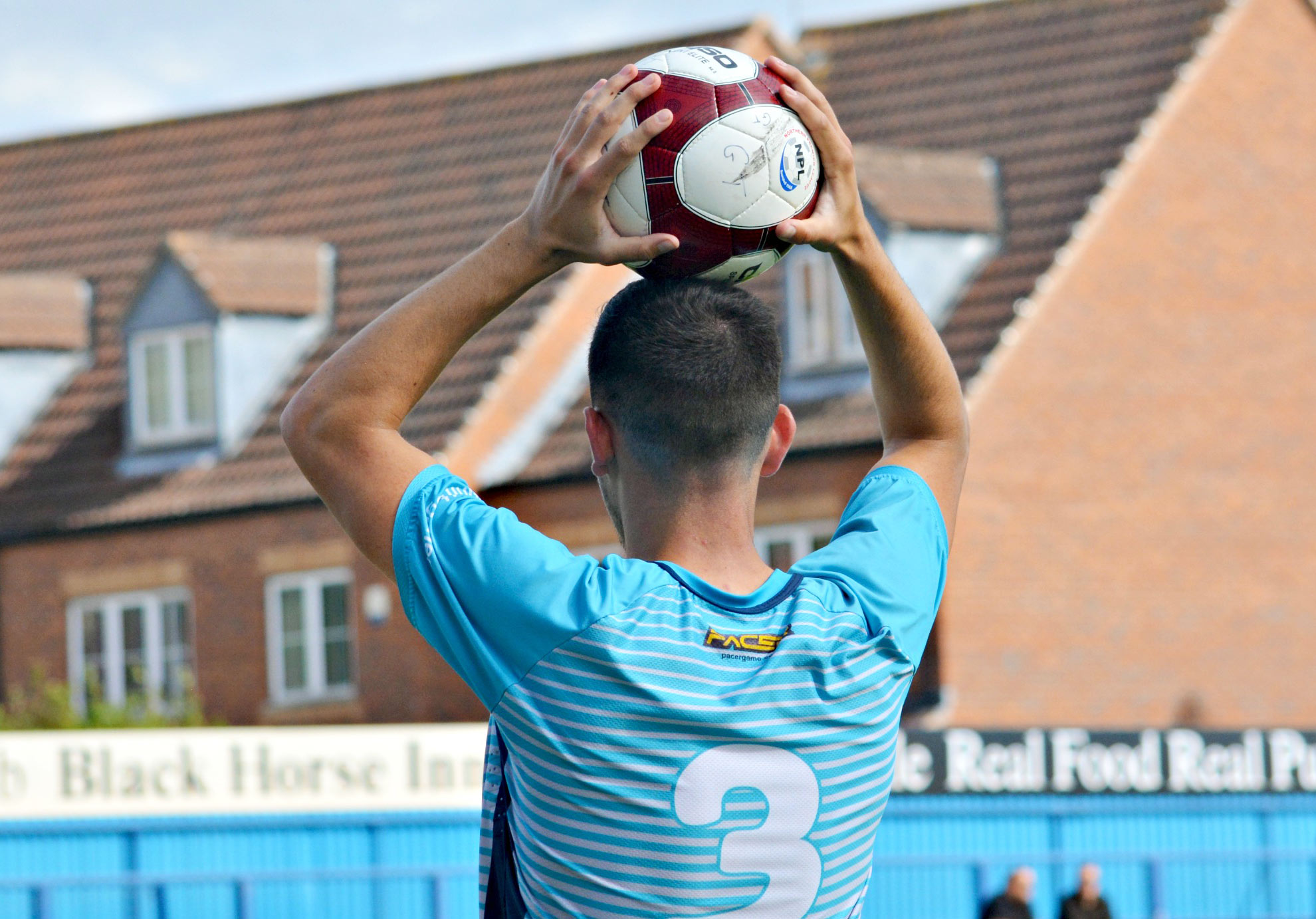 Trinity’s defence was compact and resolute, with the Holy Blues’ best openings coming from counter attacks or set pieces. Right on the stroke of half-time, a Trinity corner came to fruition as Luke Lofts was able to put Curtis Woodhouse’s side in front. The visitors were unable to properly clear an out-swinging Martyn Woolford cross, inviting Trinity’s number 8 to have a strike from just inside the area and fire the ball past Atkinson and into the corner of the net. Half time, Gainsborough Trinity 1 Workington 0.

The second half seemed to lack the intensity on display in the first half; unsurprising considering both sides had run-outs in the days prior to the fixture. The visitors failed to control possession in the same way they had done in the previous 45 minutes, allowing Gainsborough to dictate the game comfortably.

On the hour mark, the Holy Blues managed to create the first clear-cut opportunity of the half. Trialist A linked up well with Gregg Smith to find himself clean through and in on goal. Impressive tracking however from Workington’s Dan Wordsworth meant the visiting defender was able to slide in time to prevent a shot on goal from close range. It wasn’t until 10 minutes from time when Tom Jackson in the Trinity net was relied upon to deal with any real threat to the Holy Blues’ lead.

Workington’s substitute centre-half, Jordan Little, made good progress with the ball following a mazy run from halfway. He took strike from 25 yards out but Jackson was alert to tip the ball behind for a corner. The following moments saw few opportunities as Trinity were able to control the game and see it through to its conclusion and round off a hard-fought victory.

Speaking after the match, Trinity manager Curtis Woodhouse said “it was a good win against a very good side. They were a good team who were well coached and well managed so it was a good performance it parts,” the boss explained. “We did run out of gas in parts, particularly towards the end, but I thought first half it was a really good game, it just petered out in the second half. I’m delighted with the clean sheet, I thought we defended brilliantly; Simon Ainge and James Williamson were outstanding so loads and loads of positives.”