Gainsborough Trinity extended their unbeaten pre-season run to three matches following a stalemate draw against a young and hungry Tigers squad on Tuesday night. Whilst neither side were able to break the deadlock, both caused a number of problems for the opposing defences with Hull City striking the woodwork twice and the Holy Blues having an effort cleared off the line. Trinity entered the fixture with a number of muscle strains to key figures that ruled Gregg Smith, Luke Lofts and Matty Dixon out of the fixture.

Hull City, on the contrary, bolstered the likes of Max Sheaf who was on loan at League 2 side Cheltenham Town last season and Festus Arthur who had signed for the first time at the beginning of July. The visitors got the ball rolling and for the early stages, both sides were comfortable on the ball. Trinity appeared most threatening out of possession with Curtis Woodhouse’s high intensity pressing forcing a number of openings for the Holy Blues. The first real opportunity of the match fell to Lewis Collins after some effective pressing work from the Trinity frontline and midfield force a loose pass out of the Tigers’ defence. The Holy Blues were quick to thread the ball through to Lewis Collins who made his way through on goal, however a pacey recovery from Festus Arthur was enough for the visiting defender to track back and block the strike from Collins.

The game seemed to be open enough for both sides to create chances, however none of the defences seemed stretched and vulnerable throughout the first half. The first glimpse of an opening for the visitors came from ex-Trinity loanee, Billy Chadwick. The right-winger’s pace placed the Holy Blues captain under pressure as he tried to break around the outside of the centre half. Ainge appeared to utilise his strength to see off the tenacious efforts of Chadwick, however a miscommunication between the Ai 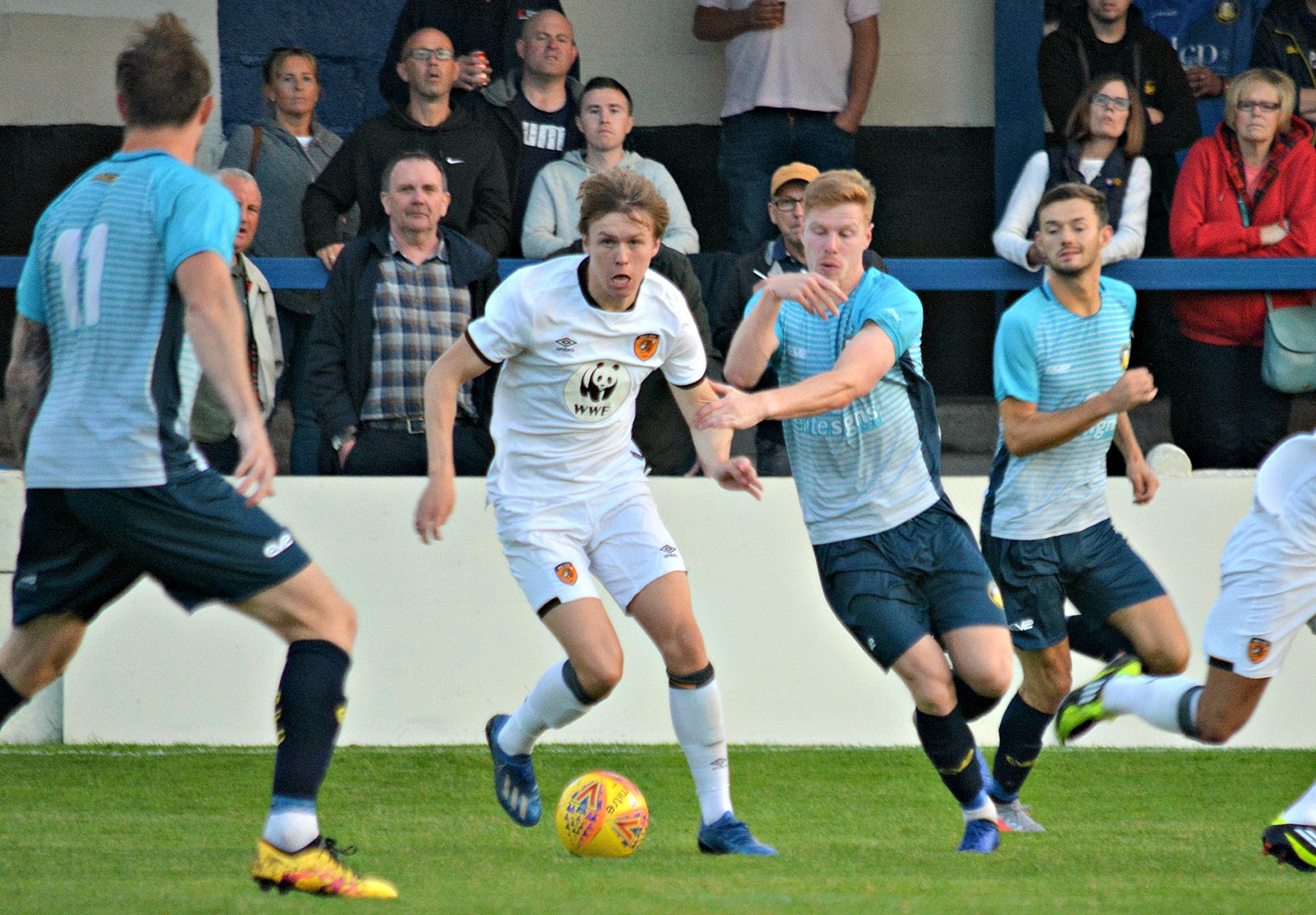 nge and Tom Jackson in the Trinity net almost gifted the Tigers attacker with a simple tap-in. Jackson, however, was able to block the ball with his feet at the last to prevent a calamitous opener for the visitors.

Midway through the half and it was the visitors again who created the next threatening opportunity. Some quick distribution from Dave Robson in between the Tiger’s posts released James Berry down the left flank and in behind the Trinity backline. Berry was able to reach the ball before it crossed the by-line and glided past Collins who had tracked back to reinforce the Trinity defence. The Hull attacker opted to stand the ball up towards the back post but his cross left plenty to be desired and Trinity were able to escape a nervy encounter.

The closing stages of the half saw neither side create any clear-cut opportunities, with both appearing to settle for seeing the game through to a goalless score at halftime. Trinity left-back, Jack Walters, however was forced off the pitch clutching his right hamstring and forced Woodhouse into his first substitution of the match. Half time, Gainsborough Trinity 0, Hull City u23s 0.

Trinity resumed the match after the break however it was the former loanee in Chadwick who came inches away from opening the scoring for the visitors. A well worked move opened the space for the Tigers’ number 11 to the right of the Holy Blues’ penalty area, however his driven shot across the face of goal narrowly flashed past the post and Trinity were able to avoid a nightmare start to the second half.

Moments later and the young Hull side came even closer to breaking the deadlock. Berry, who had looked a threat for the visitors throughout the match, was slipped through and on towards goal. The onrushing recovery from the Trinity defender forced Berry into taking his strike early and his curling effort from 25-yards was kept out by the crossbar of Tom Jackson.

Woodhouse’s men were able to settle after a lively opening to the second half and their first effort from Trialist B forced a reflex save from Robson in the Tigers’ net after the midfielder’s strike took a deflection on its way towards goal. The resulting corner threatened the visitors once again as Simon Ainge’s header back across goal was kept out by a goal-line clearance from Max Sheaf for the Tigers.

Both sides then came close once again with one chance apiece. James Berry’s centre was met on the penalty spot by the striker on trial for Hull City whose effort rebounded off the post, with his follow-up effort blocked and the resulting corner cleared by Trinity. Within the dying embers it was the Holy Blues captain who once again came closest to breaking the deadlock for Woodhouse’s side. His header at the back-post from a free kick flew narrowly wide of mark and ensured that both sides shared the spoils. Full time, Gainsborough Trinity 0, Hull City u23s 0.

Speaking after the match, Trinity boss Curtis Woodhouse hailed his side. "I thought we were brilliant", the former Hull City player said. "I thought we played some great stuff and came out of the traps really fast. For the first 20 minutes I thought we dominated, but then they had a 10-15 minute spell where they got hold of the ball and had good possession but on overall play I thought we more than matched them. On the counter, especially during the last 10-15 minutes, I thought we looked really dangerous and on another night we could’ve scored. It was an even game but I thought we shaded it and I couldn’t be any happier."