Gainsborough Trinity lost their final pre-season friendly of the 2020/21 season in a final work out at home to Lincolnshire neighbours, Boston United. A goal in each half for the visitors was enough to see the higher ranked opponents past the Holy Blues, but a spirited second half fight back, nearly saw the Holy Blues snatch a draw at the death. Gregg Smith was back in the starting XI for Curtis Woodhouse's side as he started alongside Ben Tomlinson in attack.

The boss handed a start to a trialist left back, following the midweek departure of Connor Smythe. There were starts too for Rod Orlando-Young and Reco Fyfe in attacking positions as the Holy Blues looked to take the fight to the National League North play-off finalists. It was the visitors though who came out of the traps quicker. Jordan Thewlis racing through on goal in the opening thirty seconds, only be denied by a brave block at the feet of the former Trinity forward's feet.

On twelve minutes though, the deadlock was broken, Thewlis was again the tormentor. Clever play on the right hand side of the Trinity box, saw the Boston man turn Simon Ainge, race to the by-line and square for veteran Paul Green, arriving late from midfield, to slot home into an unguarded goal. Tom Jackson did his best to keep the score line to one though with a number of good saves, first denying Jordan Archer from range, before the pick of the saves saw the former Brid 'keeper plunge to his left hand post to deny a clever free-kick, bouncing back to deny the follow up effort.

The Holy Blues, despite the amber and black attacks giving the Trinity rear guard a thorough examination, displayed a few glimpses with Rod Orlando-Young catching the eye on the right with some strong running and trickery on the flank, backed up by a willingness to track back and support his full back. Ha 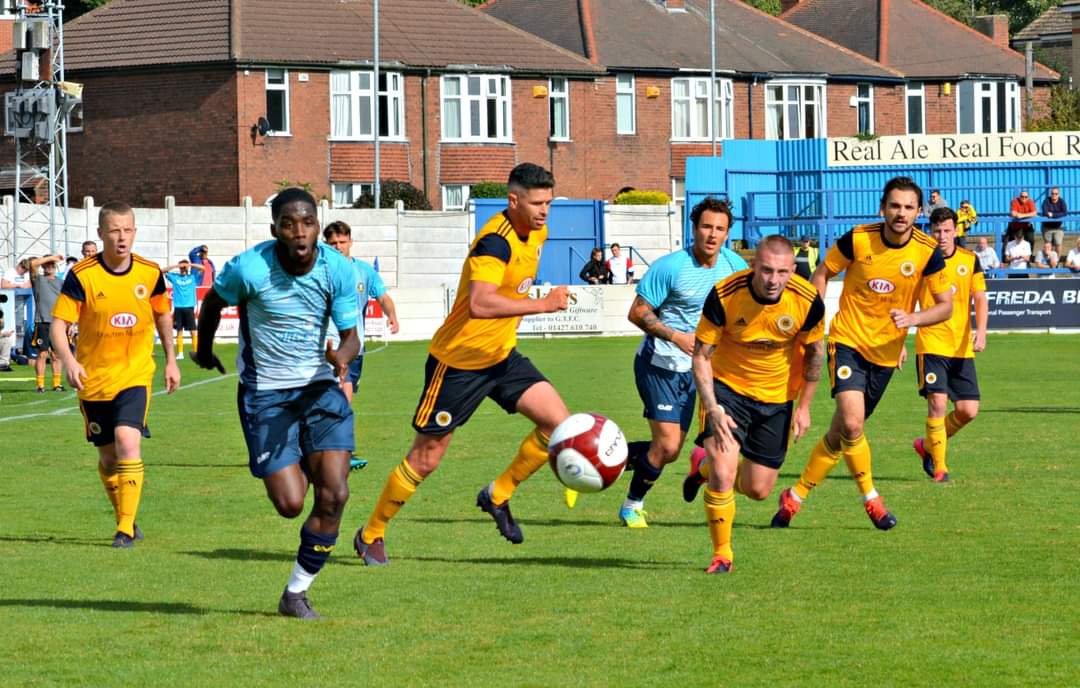 The second half saw Craig Elliot make eight changes to the starting line up, as Woodhouse made a more reserved two. Gregg Smith coming through 45 minutes unscathed and Lewis Collins making way. Trialist B and Gianlucca Bucci completing the Holy Blues' second half line up.

Despite the number of changes, it only took the visitors 17 seconds of the second period to double their advantage. Jay Rollins escaped down the right hand side and crossed for Jordan Burrows to dive full length, planting his header past the helpless Jackson in the Trinity goal.

Undeterred, Trinity battled gamely, eventually getting a foothold in the game as they refused to lay down and surrender. Ben Tomlinson didn't give up and he capitalised on a defensive lapse, skipping between Peter Crook and Scott Garner to lift a sumptious finish over the advancing 'keeper to halve the deficit.

In the final ten minutes, substitute Jack Walters could have grabbed an equaliser, only to see his shot on the turn parried behind for a corner by Crook. Full time, Gainsborough Trinity 1 Boston United 2.