Gainsborough Trinity started 2022 in the same way they brought the curtain down on 2021, with a point on the road, drawing one all. This time, the point taking Trinity’s unbeaten run to five on the spin, came away at Witton Albion. Albion sitting below the Holy Blues in the table, but in something of a false position have three games in hand on the Holy Blues, but the resilient Blues kept the home side at bay in horrific conditions at Wincham Park .

Gainsborough Head Coach, Tom Shaw made five changes from the side that drew with Grantham on December 27th. Three changes in the back line saw George Hornshaw back in the side at left full back, while Callum Minkley and Lewis Carr were restored to the central defensive positions, with Neal Bishop moving into midfield. Injuries to Charlie Jemson and Isaac Rice, saw them out of the sixteen, while seventeen-year-old Elicha Ahui moved to the bench. Dec Bacon also started on the bench, as Shaw looked to unleash Curtis Morrison and Jovon Makama in a three-pronged attack. Assistant Manager, Jake Sheridan, registered as a player in midweek, was named on the bench for the Holy Blues.

The home side started quicker and looked to get on the front foot, with Matt Yates in the Gainsborough goal the busier of the two 'keepers in the opening five minutes. The former Derby County stopper forced to back pedal smartly to tip Will Jones' looping header over the crossbar, before claiming the resultant corner. Further flank kicks were well dealt with by the number one as Trinity began to settle in difficult under foot conditions through the middle of the park.

Joe Wilson and Jovon Makama combined well down the right hand side, the latter doing well to get to the by line and cut the ball back for Curtis Morrison, his left-footed effort fizzing goal-wards, was saved at the second 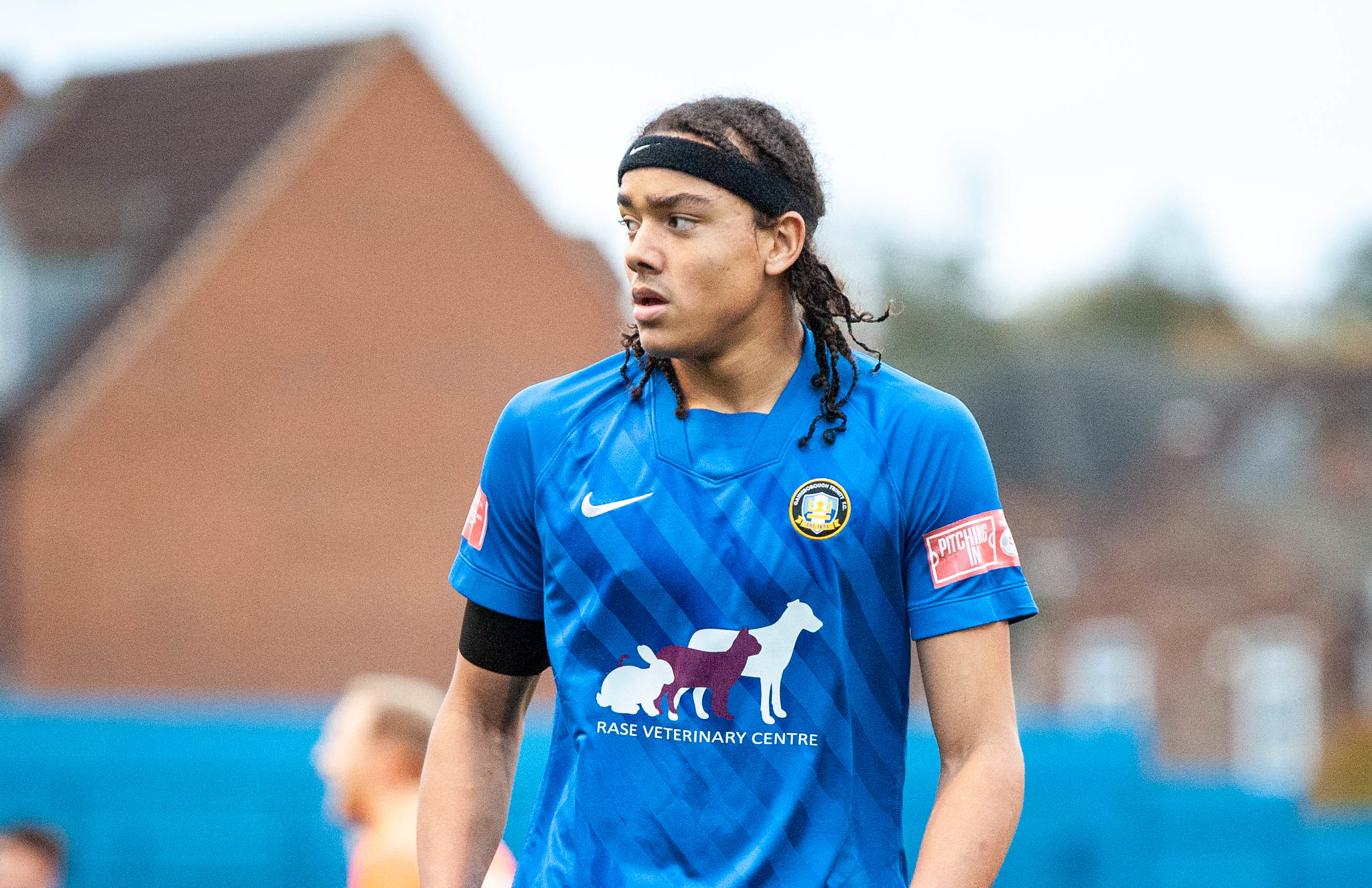 attempt by Greg Hall, with Grayson looking to pounce.

On nineteen minutes, Trinity broke the deadlock when Makama got the telling touch on Cieron Keane's pinpoint free kick, diverting the ball past the helpless Hall in the Witton goal. The teenage Lincoln City loan star netting his third goal in Gainsborough colours, his second in two games.

At the other end, Jebrin Jabri went down easily, with the Referee quickly waving away the appeals for a penalty from the home crowd and players.

As the half wore on, Isaac Baldwin's long throws continued to ask questions of the Trinity defence, but when the defence was breached, Witton found Yates in top form. Callum Saunders found half a yard to poke the ball towards goal, but Yates was down smartly at his left post to save.

Trinity lost the returning Morrison near the end of the first half, as the pitch claimed it's first victim. The flying winger forced off, to be replaced by Bacon.

Witton made the first of three quick fire changes at half time. Three changes that influenced the flow of the game. McKenna, Hopley & Owens all being thrown into the fray in the early exchanges of the second period.

Captain Carr, and Callum Minkley alongside him, were winning the majority in the air and bravely putting their bodies on the line. One goal bound effort from James Foley arrowed towards goal, but Minkley stood up bravely to block as the Holy Blues looked to keep the home side out.

Immediately after the trio of changes had taken place though, Witton were level. Joe Ferguson was given too much room to come forward from right back and his dangerously whipped in centre was swept home by Albion hotshot Callum Saunders to square the game up.

Tom Owens then created room in the box with a smart turn for Albion, but off balance, his effort flew over the angle of post and bar.

Minutes after going level, Albion had the ball in the net a second time, with Trinity at sixes and sevens. Save for the eagle eye of the nearside official, who had his flag up smartly to curtail the Witton joy. Saunders’ second chalked off for offside. Witton skipper, Josh Wardle had helped on Baldwin’s’ long throw. Hopley couldn’t connect, and as the ball spun forwards, Saunders turned the ball home, but immediately knew he was beyond the last man to his own frustration.

When Bishop secured the second ball and invited Keane to come forward, the former Republic of Ireland youth almost caught Hall out, as his sliced cross almost snuck into the top right hand corner of the ‘keepers goal. The number one just about doing enough to see the ball behind for a corner. Grayson then let fly as the ball dropped from the resulting corner. But Ferguson was brave (or he knew very little about it) as the ball struck him flush in the face – and it was travelling!

Makama then improvised on the right and flicked the ball into Parkin on the edge of the box, but the two former Grantham men couldn’t quite combine, as the ball just ran away from Grayson inside the box.

Alex Wollerton got ten minutes at the end, as he came on for the injured Joe Parkin. Trinity's all action midfielder unable to complete the ninety, the second victim of the Wincham Park pitch. But Wollerton making a welcome return following his injury and illness over the Christmas period.

A moment of Grayson magic saw the forward spin on a six pence twenty yards out, flicking the ball up for himself- he swivelled and smashed the ball goal wards. His effort was too hot for Hall to handle, but as the home custodian scrambled to his feet, Makama wasn't able to gobble up the rebound - inches from the telling connection to send the Holy Blues home with all three points.

Four minutes from time, Grayson headed straight at Hall from Bacon's left wing centre as Albion held out for a share of the spoils, with the weather again taking a turn for the worse in the closing stages.

Deep in stoppage time, Bacon did brilliantly to take the ball in his stride in the inside left channel. Cutting in onto his right foot, he just couldn't bend the ball inside Hall's far post & the final chance disappeared. Both sides having to be content with a point.