The away day curse struck again for travelling Trinity as a Luca Navarro goal in each half was enough to send the Holy Blues home to Lincolnshire with nothing to show for an afternoon's hard graft in Manchester. Radcliffe coming out on top in this midtable battle to put a five point gap between the two sides after twenty-seven games a piece. Head Coach Tom Shaw made two personnel changes to his starting eleven, but was forced into a formation re-jig due to the injury and unavailability of first choice full backs Joe Wilson and George Hornshaw. Isaac Rice was recalled following injury, slotting in on the left of the defence, while Callum Minkley moved to right back.

Veteran Neal Bishop was parachuted into the centre of defence alongside skipper Lewis Carr. Alex Wollerton, Elicha Ahui and Cieron Keane made up the midfield three, as Shaw went for a brave front three of Jovon Makama, Bradley Grayson and Cameron Johnson along the top. Keen to take the game to the 'Boro. Unfortunately for Shaw - and the travelling Trinity faithful, Radcliffe struck early, with Isaac Rice off the field having required early attention for a cut to his face and the replacement of a shirt, Navarro making the most of the man advantage to sneak in through the inside right channel and beat Matt Yates at his near post.

A setback early, was one that the Holy Blues wouldn't fully recover from. Playing down the slope, Radcliffe were the more dangerous in the opening half. Flashing a couple of efforts across the face of Yates' goal. The Gainsborough midfield trio battled gamefully, to try and establish a foothold in the game, but a whistle interrupted half did little for the flow of the game and with the midfield and forward link up disjointed, Trinity found it increasingly difficult to trouble the home side.

An audacious effort from Cieron Keane looked to catch the 'keeper off his line. But with the goalkeeper in no man's land, Keane's effort sailed a yard or two wide of McIntrye's left hand upright. Makama threatened to get in behind, but alert goal 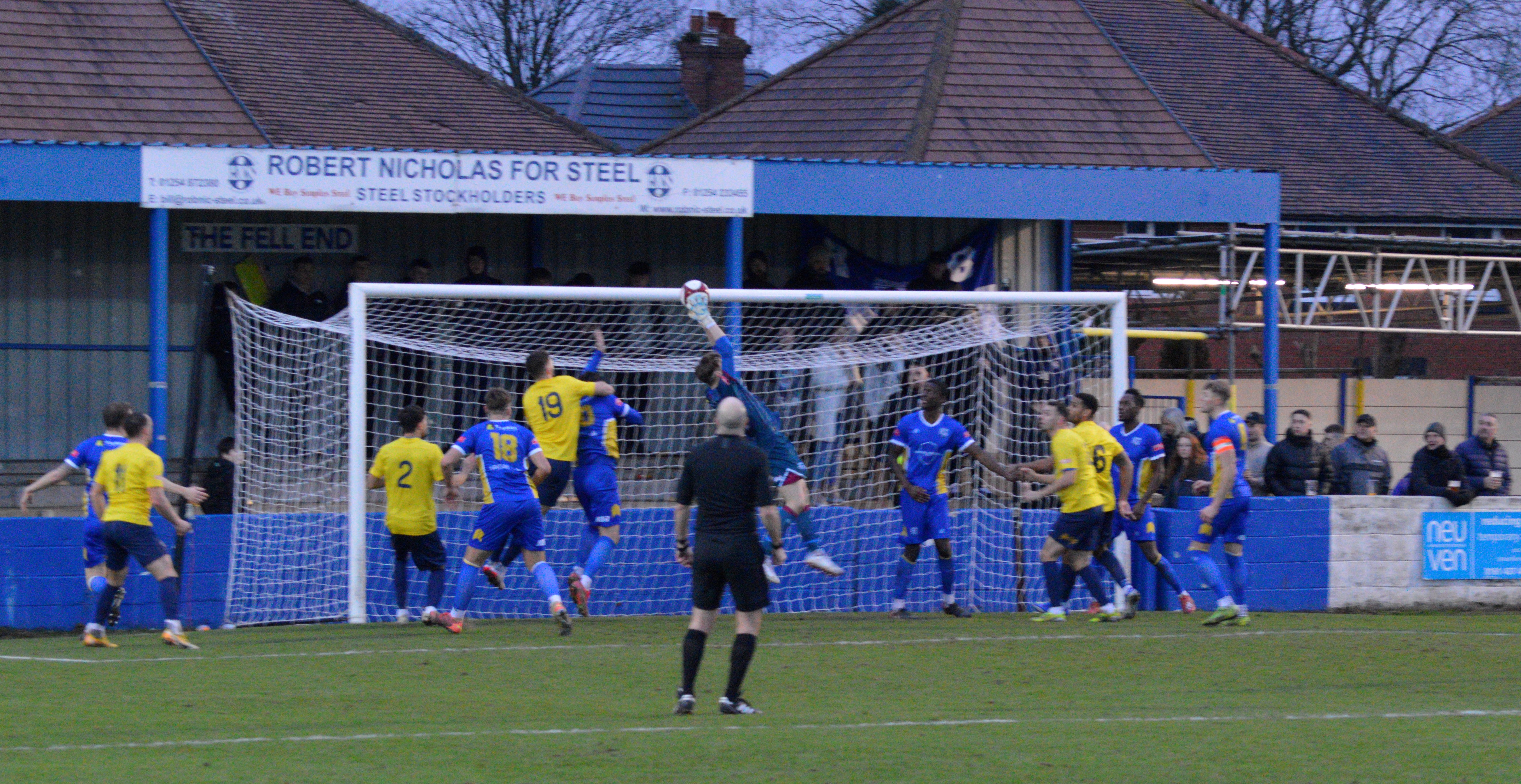 keeping from the Radcliffe number one saw him first to the ball. Before the front man made the wrong choice, firing wide of the near post, with three men at the back post lined up, crying out for the cutback.

Cameron Johnson was lively as he made his first start for the Holy Blues, but got little change out of a stubborn Radcliffe rear guard The best chance Trinity could muster, saw leading marksman Grayson control the ball from Keane's free kick, only to see his steered effort deflected behind off a yellow shirt for a goal kick.

Attacking down the slope in the second half, only a goal behind, Trinity started the half on the front foot, looking to get back on terms, but 'Boro dominated in the air and looked to pick off the Holy Blues on the counter.

Trinity huffed and puffed, but resorted to the long ball too quickly, proving meat and drink for Cummings and Thornley at the heart of the Radcliffe defence. Bobby Grant combined with Navarro for the nippy forward's second. Grant helping the ball on for the former Stafford Rangers man to scamper forward, round Yates and net with a composed finish, as Trinity looked round for an offside flag that never came.

On a hat-trick, Navarro unselfishly squared for his Player/Assistant manager Grant, but his ball sent the leading marksman away from goal. Bacon, Cursons and Morrison were all thrown into the fray in the second half, but like the trio they replaced, chances for the substitutes were few and far between. Jack Moore caught an effort well, that flashed just high and wide, with Yates beaten all ends up, before the hosts shut up shop and were content to take the sting out of the game for long periods. Keane blazed over, before in the last minute, Wollerton tested McIntrye with a drive from range. The goalkeeper equal to the effort.

Attention now turns to Stafford Rangers next Saturday, when the Holy Blues will be looking to put on a show for the home support. The support which has been fantastic in noise and numbers for the young Blues throughout the season to date. Let's continue striving for better, together and start another run. Together, stronger. In it together.