The weather killed what on paper looked to be an engaging encounter between two form sides. Trinity, with only one defeat on home turf all season and a resurgent Stafford who last lost on the road back in October and with the third best away form ahead of the game. Gale force winds killing the spectacle as high winds whistled down the pitch from one end to the other, in a relentless battering by Storm Malik who presented the two sides with an extra opponent to overcome. And in truth, it probably was the additional opponent who enjoyed the most success as it wreaked havoc throughout.

Head Coach Tom Shaw was able to welcome back two of the injured half dozen, as George Hornshaw returned at full back, this time at right back to add balance to the side, as Callum Minkley resumed his partnership with Lewis Carr in the centre of defence. Charlie Jemson returned to the sixteen for the first time since injury on Boxing Day.

The visitors raced out of the blocks, playing into the wind, and centre back Ethan Stewart had two great opportunities to open the scoring for Boro. First his downward header from a Tom Tonks long throw was brilliantly turned away by the plunging dive of Trinity 'keeper Matt Yates. Then from the corner, Stewart found himself unmarked six yards out, but he blazed over when in truth he had the time to bring the ball down and pick his spot.

A long clearance almost turned into a brilliant ball as Grayson played on the shoulder of James O'Neill. As the striker got to the ball first on the edge of the box, he went to ground under the challenge of the retreating defender. Both Referee and Assistant in agreement that no foul had taken place - and the game was allowed to continue, to the fury of the front man.

Jovon Makama produced a piece of quality by the left-hand corner flag to beat Andrew Burns. The teenager creating a shooting opportunity which Luke Pilling parried away. Elicha Ahui was in the right place, but his goa 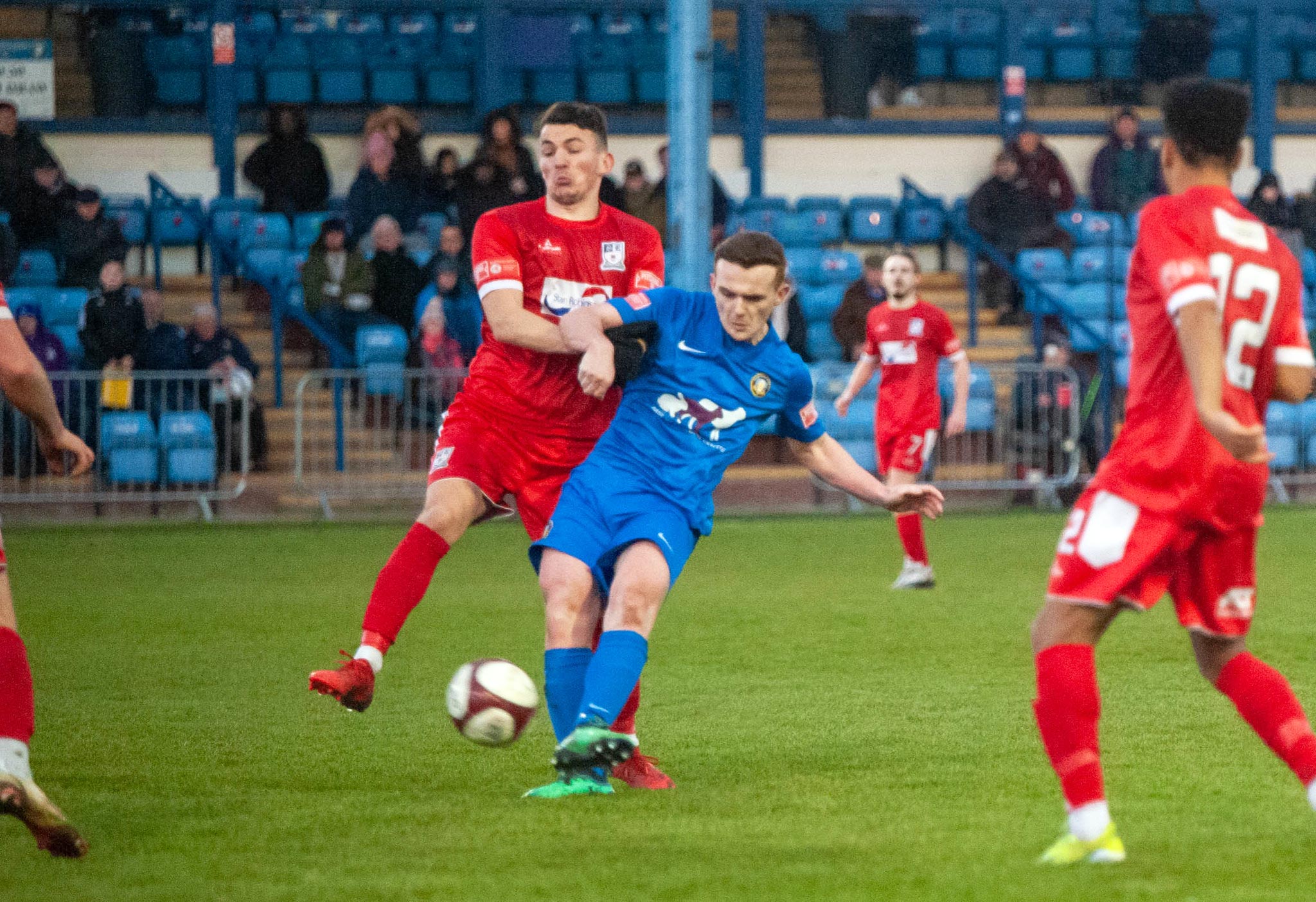 Grayson then broke the lines and found space between the defence and goalkeeper, only to see his audacious lob sail narrowly wide of Pilling’s upright.

Chances were at a premium in the second half, but Tom Tonks’ long throw was always a threat. The young Holy Blues for long periods stood up to the test in gale force winds. Stafford looked for a way through, and pinball in the Trinity penalty area on two occasions had the Gainsborough faithful with hearts in mouths.

The first, the ball dropping kindly off Stewart for Yates to claim, before Tonks shot goal-wards from the right wingers’ cut back, before Alex-Ray Harvey, Kaiman Anderson and Alex Fletcher all snatched at presentable openings in a frantic ten second spell.

Yates had to be out bravely to block from that man Stewart, up from the back again, when Tonks’ throw was helped on. Striking the back of Minkley it dropped for the centre back who tried to force the ball goalwards. But Yates was down bravely to smother.

Tre Pemberton then did well to keep the ball in as it looked to be going out for a goal kick, his ball finding Tonks ahead of the near post. His attempted effort looping over Yates’ bar as the roving midfielder looked to generate all of his own power on the header. The game exploded into life as the clock ticked into the ninetieth minute when Cieron Keane opened the scoring with a stunning strike against his former club, only to see Alex Fletcher seal a share of the spoils two minutes later.

As Grayson looked to drive the Holy Blues forward, he couldn’t find the keys to unlock the visiting defence, but backed up well by the midfield, substitute Cameron Johnson was found on the left, a neat pass in field was just what Keane wanted as he bent a first-time finish over the despairing dive of Pilling in the Rangers goal to the delight of the Trinity faithful. A true moment of quality that was fit to win any game of football.

Trinity couldn’t see the game out though, with Alex Fletcher firing home through a crowded six-yard box after Tonks’ long throw wasn’t fully cleared and the midfield dynamo recycled the ball well. Half dealt with by the Trinity backline, Fletcher kept a cool head to fire low past the unsighted Yates to quickly restore parity. There was still time for a penalty appeal when it looked like Stafford’s Stewart had handled. It was instantly dismissed as Mr Woolley pointed for a corner instead and the points were destined to be shared.