Gainsborough Trinity put in a shift to be proud of at Bower Fold returning to Lincolnshire with the very least their performance deserved, a point from a heartening display of guts, determination and no little quality. A display that Head Coach Tom Shaw hailed as one of the best performances of the season. Three changes to the side that drew at home to Stafford Rangers ten days ago and a positional reshuffle, saw Charlie Jemson and Joe Parkin returning from injury to partner skipper Callum Minkley at the heart of the back three.

Two seventeen-year-old teenagers alongside Cieron Keane made up the midfield trio as Neal Bishop missed out due to personal reasons and Alex Wollerton started on the bench as Morgan Worsfold-Gregg debuted alongside Elicha Ahui. Up top, Bradley Grayson and Jovon Makama were given the chance to further develop their understanding- and inside the opening four minutes, both were involved in Gainsborough's opening goal. Trinity defended Ashley Smith-Brown's low right-wing corner. Finding lone forward Grayson, he held the ball well and swept it across to George Hornshaw, who bravely played in Makama to race half the length of the field and slot a composed finish past the 'keeper to give the visitors the early advantage.

Midway through the first half, Matt Yates was called into action for the first time when he did well to best away a fierce effort from the home number nine, as the Gainsborough back line was breached on a rare occasion during the first 45. Raul Correia was the man to test Yates. After Justin Jackson drove forward, Correia got an effort away on the spin that Yates was equal to. Parrying the shot away from the danger zone. Jackson then got an effort in on goal, but his effort lacked any real purchase from the edge of the box, not troubling Yates in the Gainsborough goal. The 'keeper getting everything behind the ball to gather comfortably. 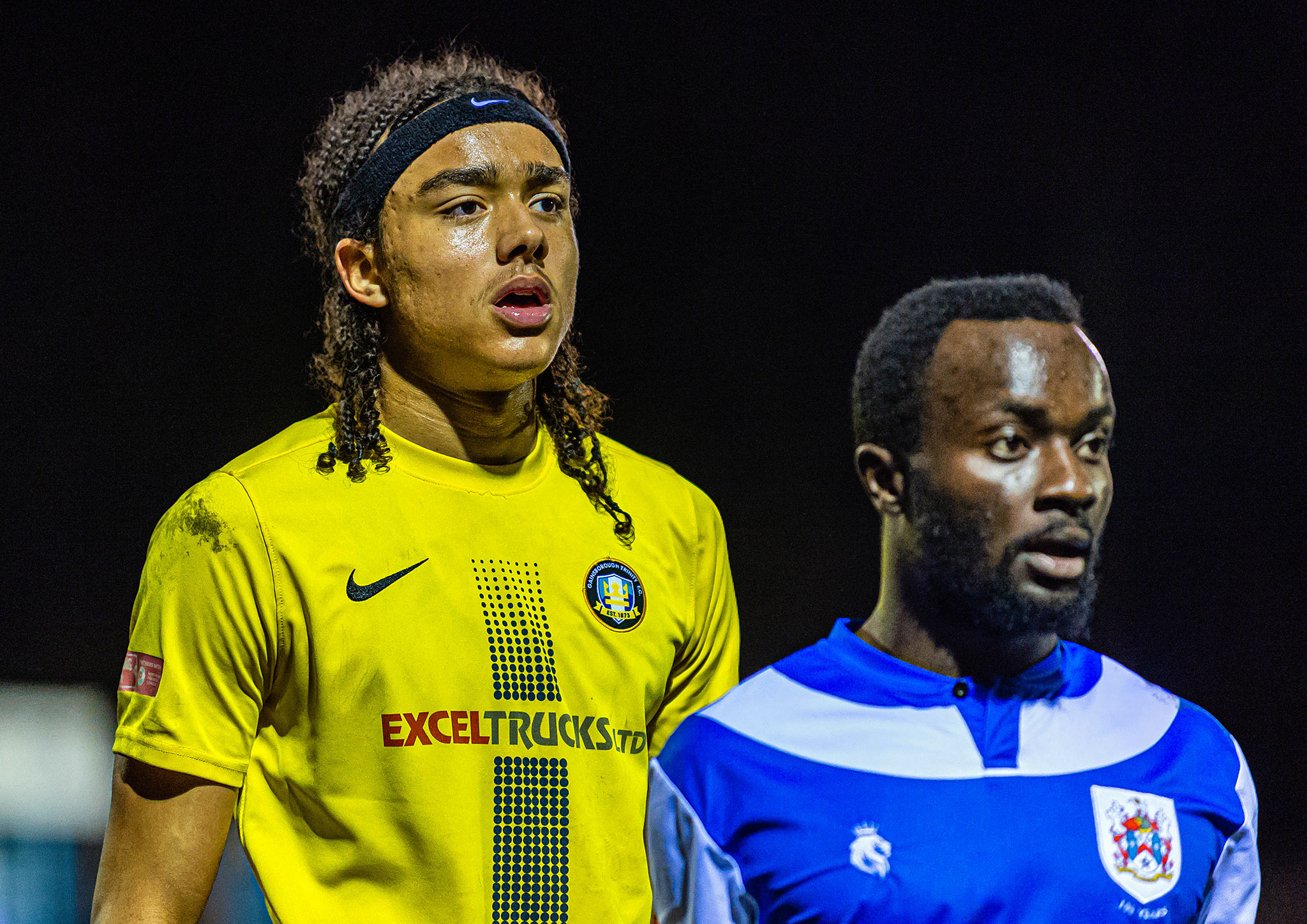 rish midfield play saw Ahui regain possession for the visitors before he linked with the forwards. Clever front play saw a Grayson step over completely deceive the Celtic centre back. And Makama's low finish cannoned off Parke's left hand upright with the 'keeper beaten. Trinity's work rate and endeavour making up for experience that they lack as a group. Yates a brave presence behind his back line, looking to dominate the aerial ball into his box, taking the pressure off his defence.

Cieron Keane then drove forward from midfield and drew the foul. Stepping up, he struck a superb effort past the wall and past the despairing dive of Xander Parke only to see the ball strike the same post that had earlier denied Makama his second. Grayson caught flat-footed when you would have bet your mortgage on him firing home the rebound. Trinity were vibrant, Trinity were hungry. Trinity were playing without fear and deserved to be more than a goal up at the break. Half time: Stalybridge Celtic 0 Gainsborough Trinity 1.

Celtic came out of the blocks quickly at the start of the second half. Ashley Smith-Brown the first to shoot goal-wards. But his effort from twenty yards sailed over the bar. Callum Harris then delivered a deep cross into the box that Charley Doyle met at the back post, but his header back across the face of goal didn't find the target.

Skipper Callum Minkley did well to control a Keane free kick inside the Stalybridge area and fashion a shooting opportunity that Parke did well to save, to keep the home side in the game. And soon after, Bridge's mounting pressure told. Jackson combined with substitute Scott Bakkor to find himself in room to cross, his right footed delivery flashing all the way across the face of goal, and Stephen Brogan, the former Trinity man was on hand to turn the ball in from close range.

Stalybridge continued to come forward, and Brogan turned provider when his left-wing cross was headed against the upright by the right-wing back Liptrott. The ball cannoning off the same post that had twice denied the Holy Blues in the first half. The ricochet striking the back of Yates and going behind for a corner. Under pressure, Yates did well to punch clear under pressure and the visiting side saw out the final moments of the game comfortably, even perhaps feeling unlucky not to have been awarded a late, late spot kick for Keenan Quansah’s challenge on Dec Bacon. The referee content to only award travelling Trinity a corner kick.

One point gained, or two lost. That's your choice, but a team performance from a very young side that gave their all. And for the supporters in attendance, one that demonstrated real signs of promise for the rest of the season - and the future of Gainsborough Trinity, if the group can be kept together.

Next up for the Holy Blues, is the visit of FC United of Manchester. Gates open at 14:00 and we are hoping for a bumper crowd at the Gainsborough Martin & Co Arena. If you are thinking of attending, we would really appreciate you purchasing your tickets in advance, online. This will help to speed up your entry into the ground and help our volunteers on the turnstiles. We're hoping for a bumper crowd, so spread the word - and see you on the Northolme, roaring on Tom Shaw's Gainsborough Trinity!