Building on the promise of Tuesday night’s draw with Stalybridge Celtic, Gainsborough Trinity came out on top in a five goal thriller at the Martin and Co Arena, seeing out the last quarter of an hour to secure three huge points, against one of the sides chasing a play-off spot and move up a place in the table, closing the gap on the sides in mid-table. Head Coach Tom Shaw made two changes from the side in action on Tuesday night, as Neal Bishop returned to the starting line up at the expense of Charlie Jemson, while Freddie Draper started up front alongside Jovon Makama, with Bradley Grayson, like Jemson having to be content with a spot on the bench. Early doors, the Holy Blues were right at it.

Two teenage forwards and two teenage central midfielders played without fear and caused the visitors no end of problems, and it was no surprise when on ten minutes the Holy Blues had the first break through. Initially forced wide, Draper was able to find Cieron Keane and the former Stafford Rangers man, thriving in his new central position, squared the ball across the face of goal. Making the late burst from the middle of the park, Elisha Ahui bundled the ball in for his first in Gainsborough colours.

Makama was linking well with his strike partner and asking questions in behind, but he couldn’t test Dan Lavercombe in the visiting goal. Draper then fashioned a chance out of nothing for the home side, only to see his fierce – curling, dipping effort drop a fraction too late as it rustled the roof of the net with Lavercombe struggling to get across the frame of his goal.

The debutant wouldn’t have long to wait to get his name on the score sheet though. From the resulting goal kick, FC United chose to play out from the back. Keane was quickly onto it and won the ball back high for Trinity. Driving forward, the inform midfielder strode forward and tested Lavercombe low down to his left. The ‘keeper got the block but couldn’t push the ball far enough away from danger – and Draper didn’t need asking twice, lifting the ball over the ‘keeper, 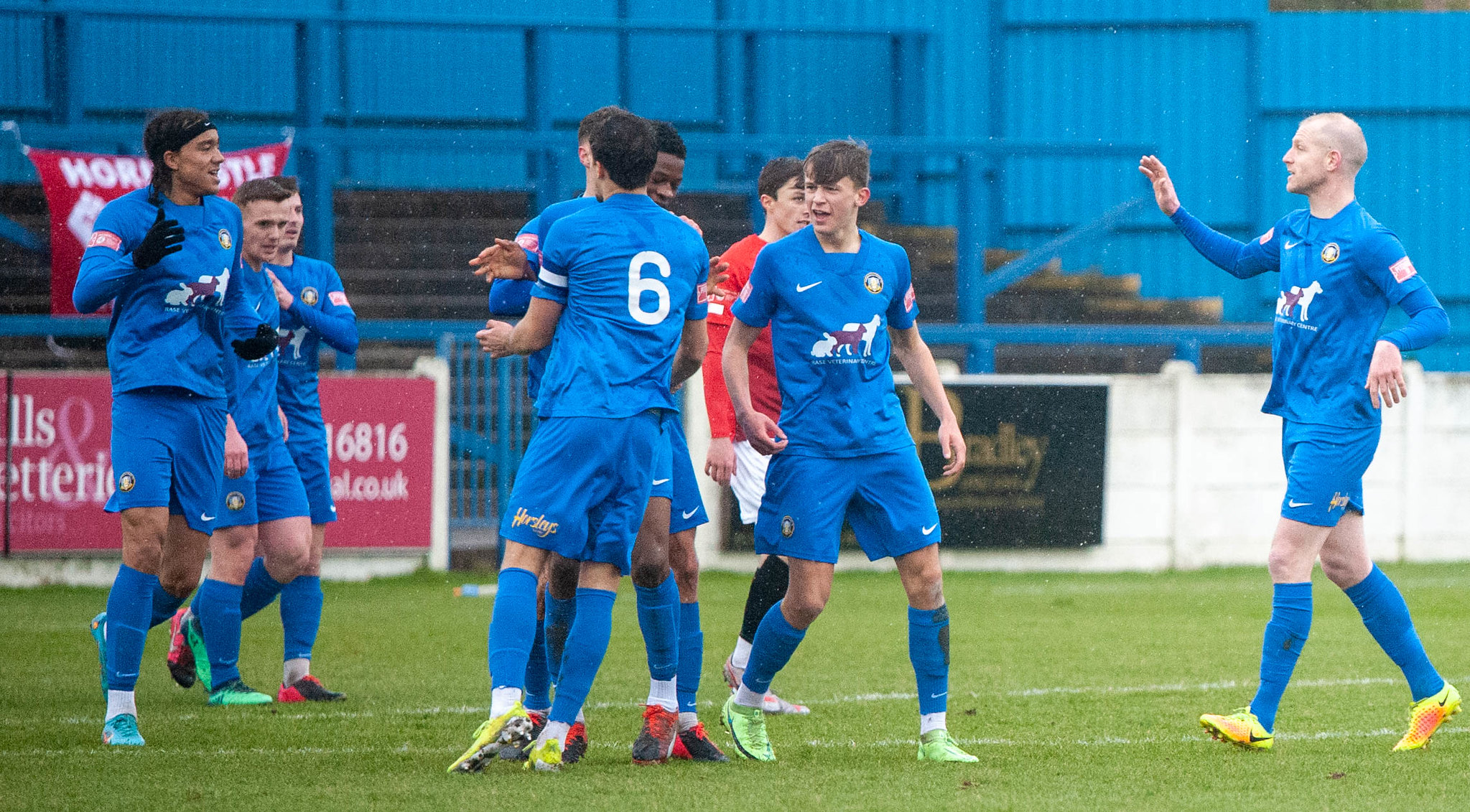 high into the roof of the net to double the Trinity advantage.

Trinity continued to dominate the opening thirty-five minutes. But a tactical switch from the visitors saw The Rebels grow more into the game. And a moment of magic from the visitors: Regan Linney a minute before half time, saw FCUM halve the advantage. The visiting talisman hauling his side back into the contest.

Linney then met a free kick from the FCUM left hand side, helping to loop the ball over Matt Yates – and the cross bar to land on the roof of the net. The pressure was building, but the Holy Blues held things together and navigated the pressure to go in at the break with noses in front, but knowing what to expect from a visiting side more than capable on the offensive.

Keane was replaced at the break by Alex Wollerton, as Shaw added fresh legs to the battle. And possibly dictated to slightly by the fact that Keane had picked up a caution in the first period for a robust challenge. The visitors started the second half brightly, and nearly caught the Blues cold, but for the heroics of Yates. Moving the ball from left to right, FC United attacked, working the ball out to Michael Donohue, he delivered from the right and Charlie Ennis’ header from six yards out was brilliantly saved by the flying Trinity number one.

Draper and Makama continued to look a dangerous pair in attack for Trinity, combining a couple of times before Draper was replaced by Reon Potts, making his competitive debut for the club having arrived from York City, yesterday. A momentary loss of concentration during a Blue attack allowed FCUM to counter, but Ennis’ effort was straight at Yates.

Potts and Makama then combined, with the 6 foot 7-inch striker making the ball stick inside the box, before laying off neatly for Ahui. The central midfielder, who covered every blade of grass getting a quick snapshot off, which Lavercombe scrambled away at the foot of his left hand upright. The home side absorbed long periods of pressure, before a quick counterattack saw a long clearance from Yates find Grayson (on as Trinity’s final change) he allowed the ball to run across his body, before weighting a beautiful ball across the face of goal for Wollerton to restore the two-goal cushion

Alistar Waddecar found forward Linney with an eye of the needle ball, seven minutes from time. The FCUM forward slotting past the advancing Yates to set up a nervy end to the game. But despite five minutes of added time, Trinity were determined not to let this lead slip and defended through to the end, to secure a welcome three points and send the majority of the bumper crowd of 969, home happy! Three goals scored, three points gained and a fantastic crowd gracing the Northolme.

All in a day’s work for Tom Shaw’s vibrant young side – who are next in action on Tuesday evening, when Boston United are the visitors in the Lincolnshire Senior Cup, Semi Final – we hope to see you at the Martin & Co again, for this one!