A patched-up Gainsborough Trinity saw off a strong Boston United side at the Gainsborough Martin and Co Arena in the Bluefin sponsored Lincolnshire County Cup Semi Final. In doing so, Tom Shaw's Holy Blues set up a final against Scunthorpe United, at a date to be confirmed. Cup-tied players and precautions robbed Trinity of several players, with the likes of George Hornshaw, Joe Parkin and Bradley Grayson having played in earlier rounds, with Jovon Makama, Freddie Draper and Callum Minkley having featured for Lincoln City, against the Holy Blues in the John Reames Trophy Quarter Final, back in pre-season.

Reon Potts started up top alongside Tom Cursons for Trinity, as Shaw named two trialist centre backs in his starting line-up. Prosper Keto started at right wing back, while Toby Gould started at left wing back on his return from injury. Alex Wollerton started in midfield alongside the industrious Elicha Ahui and Morgan Worsfold-Gregg. Matt Yates taking the skipper's armband, to lead out the young Blues.

Goalmouth action was at something of a premium in the opening exchanges, with Shaw's side playing with no fear against a Boston side that started with five first-team regulars. Keto looked full of energy and invention down the right-hand side, as he looked to get forward at every opportunity from his right wing back berth. Trinity would feel aggrieved to have found themselves a goal behind, when the two Preston's combined. Jordan Preston's sublime touch from Scott Garner's channel ball and early cross deceived Yates, turning into a brilliant ball for the second Preston, Fraser Preston - and he converted, unmarked, at the back post. Some may have thought that would signal it was time for the floodgates to open, with less than a quarter of an hour played, but that's not a characteristic of a Tom Shaw side. And going behind served as a catalyst to drive the young Blues on.

Behind, but undeterred, the home side continued to battle gamely against their mor 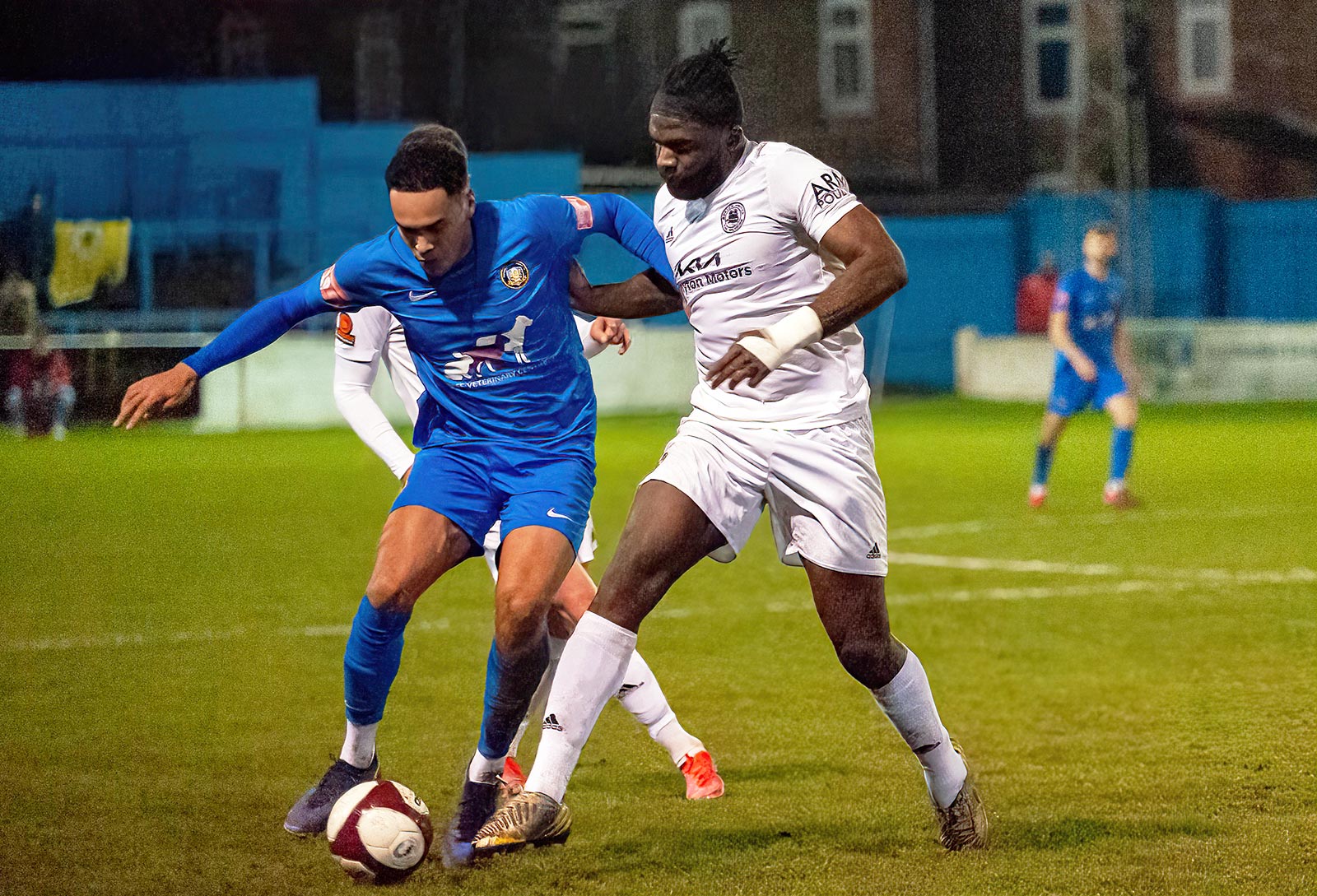 e seasoned opponents. With Mr Chester, the man in the middle on the evening, letting a lot go, this young side representing Gainsborough Trinity with heart and passion, went toe to toe with the side from a league above. Reon Potts started to become more of a threat with his dangerous runs in behind and coming short, leaving the Boston defence in two minds whether to stick or twist. A couple of half chances falling the on-loan York forward’s way, but he wasn’t able to test Peter Crook in the Pilgrims’ goal.

The Holy Blues had a good spell of the ball, but didn’t really penetrate the visiting back line, and Boston almost had a second when Matt Tootle cut in from the left and shot low to Yates’ right. The Gainsborough number one down quickly to save comfortably. Growing into the game though, Trinity would soon be rewarded. A quickly taken free-kick found Potts. His cross-field ball found his strike partner Cursons in the inside right position. He drove at his defender, forcing him to back off and he beat Crook with a tidy finish back across the goalkeeper.

Boston immediately looked to restore their advantage, when Jay Rollins fashioned himself a shooting opportunity flashing a crisp effort narrowly passed the angle of post and bar, from the edge of the box. And on the stroke of half time, Yates had to field a tame effort from eighteen yards, straight down his throat as the Holy Blues went in at the break on level terms. Half time: Gainsborough Trinity 1 Boston United 1

The Pilgrims made a raft of changes at half time, as the Holy Blues kept the side that had started the game. Adding into the fray the likes of Joe Leesley and leading marksman Danny Elliott, but the Holy Blues offered Boston very little encouragement. Trinity soaked up the pressure exerted by the visitors, frustrating our higher ranked opponents. And then began to put the pressure on higher up the park. Goal scorer, Tom Cursons ran down lost causes, and his efforts almost created an opportunity for Alex Wollerton, but he took a touch too many as Luke Shiels got back behind the ball to block.

From a long throw, United nearly benefits from an inadvertent near post flick on by a blue shirt. Rollins not quite able to keep his header down from six yards out, landing on the roof of Matt Yates’ goal. With half an hour to play, Shaw made five changes of his own, including the return from injury of Jack Gibson. Shortly after, good perseverance from Prosper Keto, he disposed Scott Duxbury on the goal line, and his cut back found the substitute trialist, but he couldn’t get hold of his effort and it was easily gathered by Crook. Trinity were knocking though.

Elicha Ahui was breaking up the play all over the park for Gainsborough. And his tigerish approach left Jordan Preston frustrated as he was lucky to escape with a yellow card, before Duxbury was late on Wollerton, the left back on at half time also picking up a caution. From that free-kick, Wollerton again looked to prompt, only to be taken out by the Boston trialist Bunge, who lunged awkwardly out of control to pick up a third Boston yellow in a flurry of activity from the referee, looking to maintain control of this semi-final.

A booming Boston clearance threatened to release Rollins, but as the Pilgrims’ talisman thought he was clean through, Ahui produced a supreme sliding challenge to halt the wide man in his tracks. Theo Hudson then tested Crook with a rising drive straight at the visiting ‘keeper. Good centre forward play from Jack Gibson securing possession for the Holy Blues in the final third and allowing the supporting cast to test the goalkeeper.

And when Boston failed to clear a Trinity corner, the on-trial centre back lashed home unerringly, to give the home side the lead seven minutes from time - and bar one goal mouth scramble towards the end. Yates was able to grasp the ball safely and thwart any lasting hopes that Boston could take the game to the lottery of a penalty shootout, setting up a Lincolnshire County Cup Final against Scunthorpe United – on a date to be confirmed in due course.