Gainsborough Trinity fell to defeat as Buxton rose to the summit of the PitchingIn Northern Premier League courtesy of their 1-0 Tarmac Silverlands Stadium victory over Tom Shaw's Holy Blues. Jason Gilchrist netting the only goal of the game on 29 minutes. Initially making just the one change from the league victory over FC United seven days ago, with Isaac Rice being replaced in the starting XI by new recruit, Stefan Galinski. It was never going to be all plain sailing though, as veteran Neal Bishop pulled up in the warmup, to be replaced at the eleventh hour by the versatile Toby Gould.

The highfliers took the game to Trinity in the opening stages, repaying their supporters, who had worked miracles to ensure there was a game possible after heavy snowfall in Derbyshire overnight. Makama and Ahui combined for the midfielder to see a sight of goal, but a superb recovery challenge thwarted the teenage midfielder as he perhaps took a fraction too long to pull the trigger.

Goal scorer Jason Gilchrist was then guilty of two missed chances, a close-range free header, powered wide and seeing another chance passed up, sandwiching a Chris Dawson rasping drive that shaved a millimetre or two off Matt Yates' left hand upright and Sean Newton driving a fierce effort down the throat of ex Derby County stopper Yates. Perhaps showing a little too much respect for the side chasing the spot at the top of the table, Trinity sat off, allowing Warren Clarke space to create & with Tom Elliot finding pockets of space, the Holy Blues had their work cut out, keeping things at one.

As the half wore on, Trinity began to grow into the game, but became frustrated as their efforts were thwarted by the vastly experienced Bucks and the frequent whistle of the man in the middle as any white shirt hit the deck. On the stroke of half time, Freddie Draper went the closest for Tom Shaw's men as he looked to fashion a chance for himself, only to see Theo Richardson out q 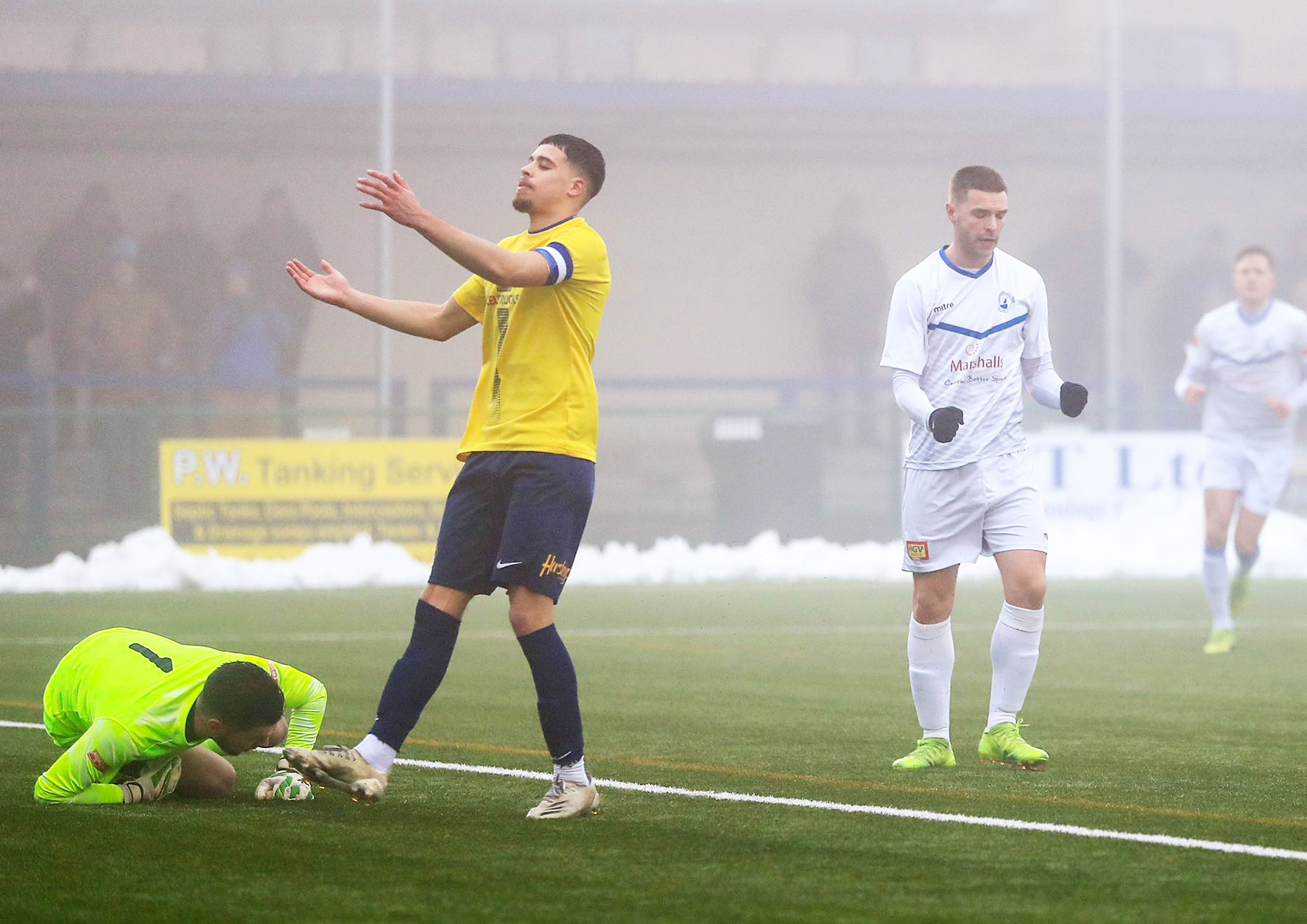 uickly to block at the forward's feet. Half time: Buxton 1 Gainsborough Trinity 0.

At half time, Tom Shaw set about reorganising the side, switching Hornshaw to left back and moving Elicha Ahui to right full back. Skipper Minkley was moved back to centre half as Joe Parkin began the half in a more familiar central midfield role. The changes made Trinity more difficult to break down, but the Holy Blues still struggled to really test the home goalkeeper and former Gainsborough trialist, Theo Richardson.

One effort that did threaten to trouble the home 'keeper saw a speculative Cieron Keane freekick effort from fully 35 yards out, it hit the target, but Richardson held on well to avert any danger.

Buxton ended as they had started the game, asking a few questions of the visitors’ defence, but Yates was a superb final barrier and Galinski settling in at the heart of defence marshalling the troops to good effect.

Attention now turns to two home games on the bounce and the opportunity to really put some pressure on the sides around us in the table. it's time for everyone to get themselves down to the Northolme and make themselves heard. There are eleven games left in the league still to play, that's 33 points up for grabs, how many of them can reside at the club with the DN21 postcode?