Gainsborough Trinity took all three points at the Northolme to extend their fine run of form on home turf, seeing off a stubborn Lancaster City side. And in the process recorded the first home and away double of the 2021/22 PitchingIn Northern Premier League campaign. Toby Gould netting twice, sandwiching Jovon Makama's second half close-range header.

Holy Blues' Head Coach Tom Shaw handed home league debuts to Stefan Galinski & Prosper Keto as Joe Parkin & Isaac Rice dropped to the bench for this one. Morgan Worsfold-Gregg was left out of the sixteen as Neal Bishop aced a fitness test, to lend his experienced head to the battle.

In a first half, where Trinity were slow to get started, Lancaster's Glenn Steel had the best chances of the first half, heading wide from inside the six yard box, when well placed. From a disputed Lancaster corner, Rob Wilson sent over an inswinging centre. Steel got across the front post, flicking his near post header across the face of the goal and off the inside of the far post, the ball bouncing back into the grateful arms of Matt Yates in the Gainsborough goal.

Liam Brockbank then ruffled the side-netting as he raced onto Sam Bailey’s cross field ball as the Dolly Blues made the running. Young full back, Keto just doing enough to throw Brockbank off his stride as he pulled the trigger.

As the half wore on with the game frequently punctuated by the referee's whistle, Trinity would have wanted to have gone in at the very least, on level terms. Freddie Draper, for long periods, found himself isolated with Makama and Gould struggling to get up in support of the central striker. 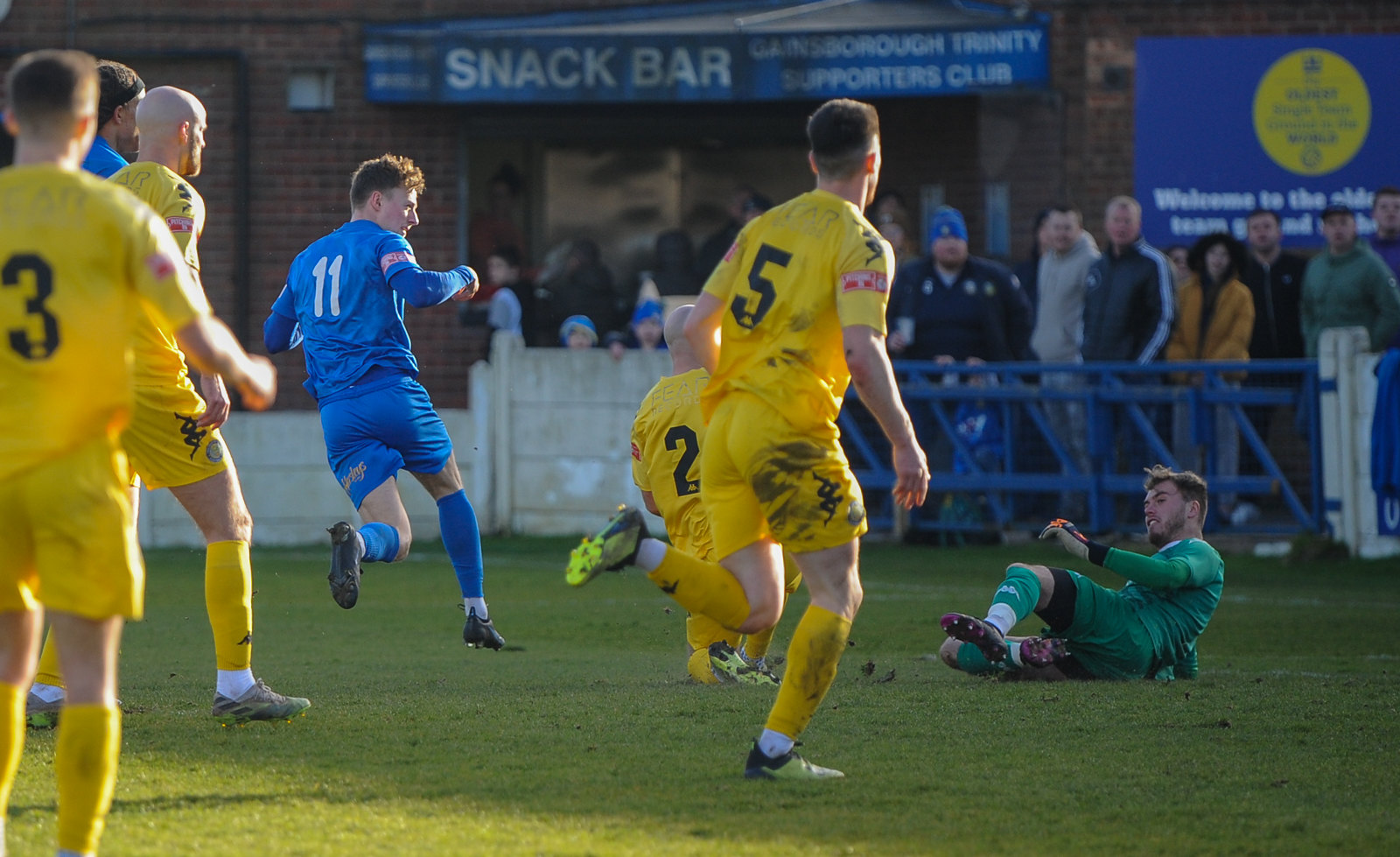 f - and the warning wasn't heeded by the Dolly Blues as Draper did brilliantly to hold off the challenge of the robust Lancaster defender, before releasing Toby Gould at just the right moment. The left wingers' touch, sublimely opened up a shooting opportunity. And against the run of play, Trinity were in front. A composed finish for Gould as he went level at the top of the Trinity scoring charts.

The goal on the stroke of half time gave the Holy Blues a lead to defend, but also renewed the side's self belief. When Cieron Keane pressed high and won the ball back for Trinity he combined with Elicha Ahui to set Draper free, but his effort on the stretch was saved well by Curtis Anderson.

But Anderson could do nothing moments later when Jovon Makama stooped unnaturally to head home Keane’s pinpoint corner. A two goal cushion with just over an hour to play, Trinity looked to have things all wrapped up.

Shortly after going two up, Nathan Reid thought he had brought Lancaster immediately back into things. Rodwell-Grant squared for the visiting number eleven, and as his effort found away past Yates, it didn't find a way past Galinski who had retreated to the goal line to preserve the two goal advantage.

And then things would go from bad to worse for the visitors, when Niall Cowperthwaite got things horribly wrong. Two attempted headers back towards his own goal falling short led to his goalkeeper, Anderson catching the ball outside his area. Mr Lazenby having little hesitation in reducing the Dolly Blues to ten men. With Makama denied a clear goal scoring opportunity, due to the 'keepers' indiscretion - few qualms could be had over the decision.

Gould, had to bide his time to take the resultant freekick as sub 'keeper Max Povey took forever and a day to don his match gear and fasten his boots. Yet no sooner than Povey had took his place between the sticks, Gould stepped up and with the aid of a deflection doubled his tally for the afternoon and put Trinity three up. With half an hour to play, and down to ten men, Lancaster feared the worst - and would have believed it was a case of damage limitation...

But Trinity coasted towards full time, with Minkley & Galinski at the heart of the defence ensuring a relatively quiet second half for Yates

A couple of minutes from time, Lancaster were handed the chance to net a consolation from the spot. Ben Anderson’s hopeful long ball was helped into the area by Sam Bailey, and as Callum Minkley headed the ball to safety, Referee Lazenby bizzarely pointed to the spot. Bailey stepping up to send Yates the wrong way from twelve yards.

There was still time with nine additional minutes for Freddie Draper to pick up a second yellow card as both teams ended a feisty affair with ten men. As the game threatened to spill over on more than one occasion in stoppage time, the Holy Blues held out, to secure all three points.

A week on the training ground now, before a host of former Gainsborough players visit next weekend when Matlock Town are our visitors! See you all next week...