Matlock Town became only the second team to take all three points off Gainsborough Trinity as they came from behind to win. And despite a spirited late response, Tom Shaw's Holy Blues weren't able to secure a share of the spoils late on. Head Coach Shaw made a solitary personnel change to the side victorious last time out. A forced change with Freddie Draper suspended, saw Joe Parkin restored to the starting line up Inside the opening six minutes, Matlock should have been in front. Stefan Galinski fouled Ross Hannah. Up stepped Alex Byrne from the spot, but Matt Yates guessed right to make a fine save.

Yates was again required, as Trinity didn't clear their lines, beating away a Callum Chippendale drive from twenty yards. Teenage Jovon Makama started to come into the game and created something out of nothing as he tied Marcus Marshall up in knots. His curling effort from Trinity's right deflected behind for a corner. As time ticked down to half time, Makama tested Joe Young, the on loan Wolves' shot stopper getting down well to deny the Trinity man at his left hand upright. The ball just not dropping quickly enough for Makama to make the perfect contact.

At the other end, Yates again had to be at his best as Liam Hughes got on the end of a deep cross to the back post, the 'keeper doing brilliantly to travel across the face of his goal and spread himself well to deny Hughes, ensuring parity at the break.

Matlock started the second half in much the same way they started the first. And it required the intervention of Prosper Keto to keep the scores level as he headed off the line from Hughes' thumping header. And Trinity's defensive heroics provided a platform and set the stage for Makama to produce a moment of magic. A free kick on the edge of the box was brilliantly lifted up and over the wall by the teenager, giving Young no chance. And Gainsborough had the lead! 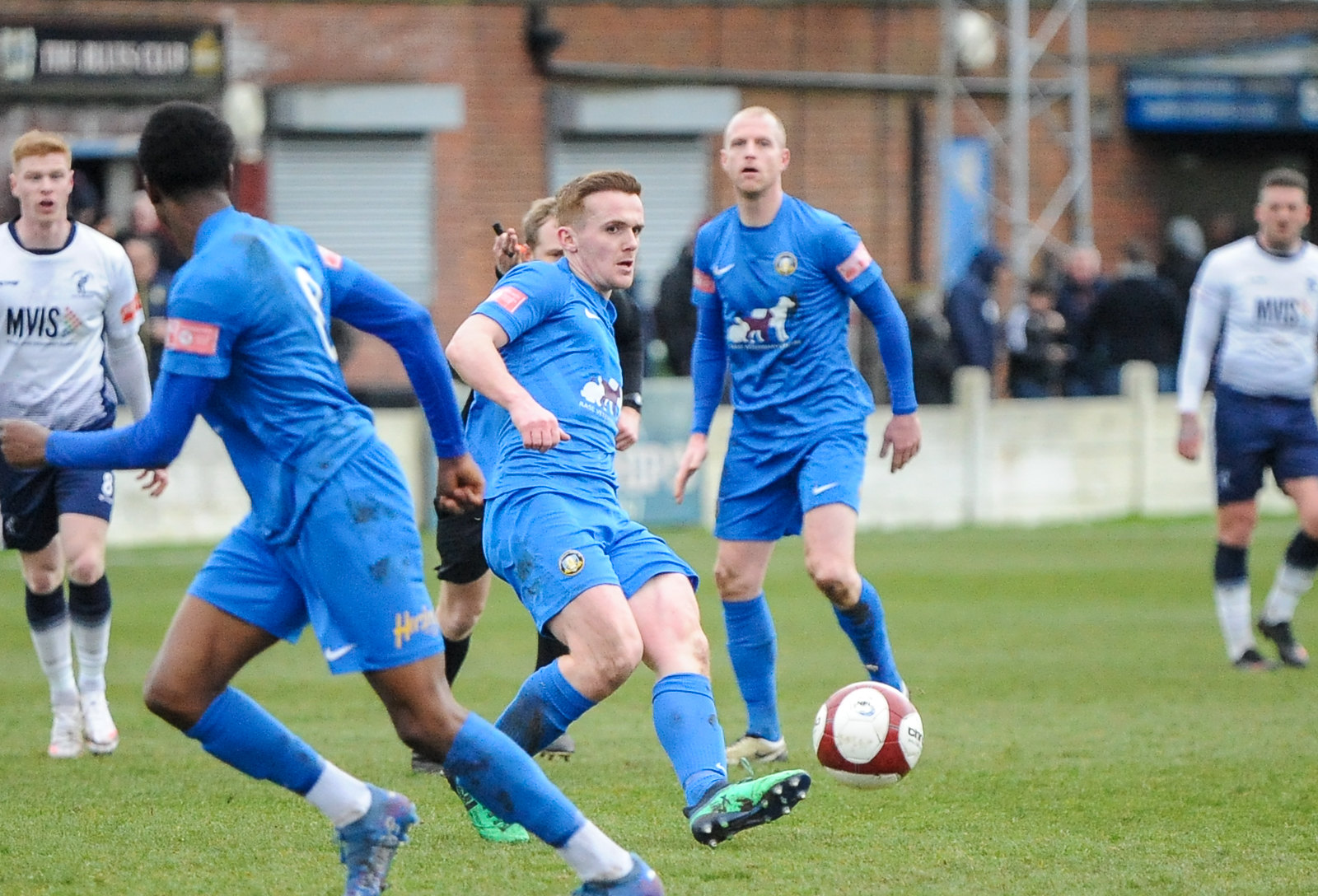 was unleashed just past the hour mark, and he timed his run to perfection. Latching onto Elicha Ahui's defence splitting pass, Grayson looked to round the 'keeper, only to be denied by good goalkeeping. And with the Holy Blues failing to grab a second, the Gladiators soon made Trinity pay in somewhat controversial circumstances.

Hughes levelled, nodding home from close range from Hannah's clever flick on, before Hannah himself was on the scoresheet to complete the turnaround when he poked home from Byrne's cushioned header back into the danger zone.

Despite going behind, the home side weren't about to go down without a fight. Grayson worked the goalkeeper when he got in down the Matlock left, before late substitute Cursons was brilliantly played in.

Unfortunately, the angle was against the forward & despite the 'keeper making a good save, teammates were perhaps better placed. There was still time in six additional minutes for one more opportunity. Only for Grayson once again to be denied by the impressive Young, with virtually the last action of the game.

Matlock emerging victorious from the game, but knowing that they had been taken all the way by a fully committed Gainsborough Trinity side who now turn attentions to Ashton United next weekend.

All good runs come to an end sometime... the challenge now is starting the next one. And we'll do it - all in it together!