Non League Day 2022 ended in defeat for Gainsborough Trinity, as 604 people watched Lewis Earl score the only goal of the game on the hour mark. Defeat seeing Trinity leapfrogged by hosts Hyde United, in the PitchingIn Northern Premier League table. The Holy Blues again unable to record back to back victories in the league. Tom Shaw made one change to the side victorious in midweek as Toby Gould was restored to the starting line-up, Joe Parkin dropping to the bench. Cameron Johnson was back in the matchday sixteen for the first time in two months, following injury. There was no room in the travelling party for Alex Wollerton, with four forwards named on an attacking bench for the Holy Blues.

A battle commenced with little to recall about the game from the opening half an hour, before Sam Peplow combined with Harry Ditchfield down the right. The overlapping full back crossed well, and with home skipper Harry Pratt arriving at the back post, he didn’t know whether to stoop and head, or go with his foot, in the end he did neither – the ball cannoning off his shoulder and wide. A let off for the visitors.

That let off sparked a response from Shaw’s men, as Freddie Draper’s acrobatics following a Neal Bishop flick on from Keto’s long throw found Jovon Makama. And Makama’s attempted overhead was comfortably saved by Joe Green as Trinity half tested the opposition goalkeeper. Moments later, Draper knew little about his chance, with the ball ricocheting off his shins in the box. Finding the gloves of the grateful Green from six yards out. Trinity won a free kick on the right hand apex of the box, but Keane couldn’t work the goalkeeper. As in truth, neither shot stopper was rarely troubled in an attritional first half. The sides going in at the break, goalless. Half time: Hyde United 0 Gainsborough Trinity 0

Five minutes into the second half, Keane got a smart effort away on the spin for the Holy Blues, but it was straight at Green, before Trinity struggled to clear their defensive lines, Jordan Fagbola caught the dropping ball on the 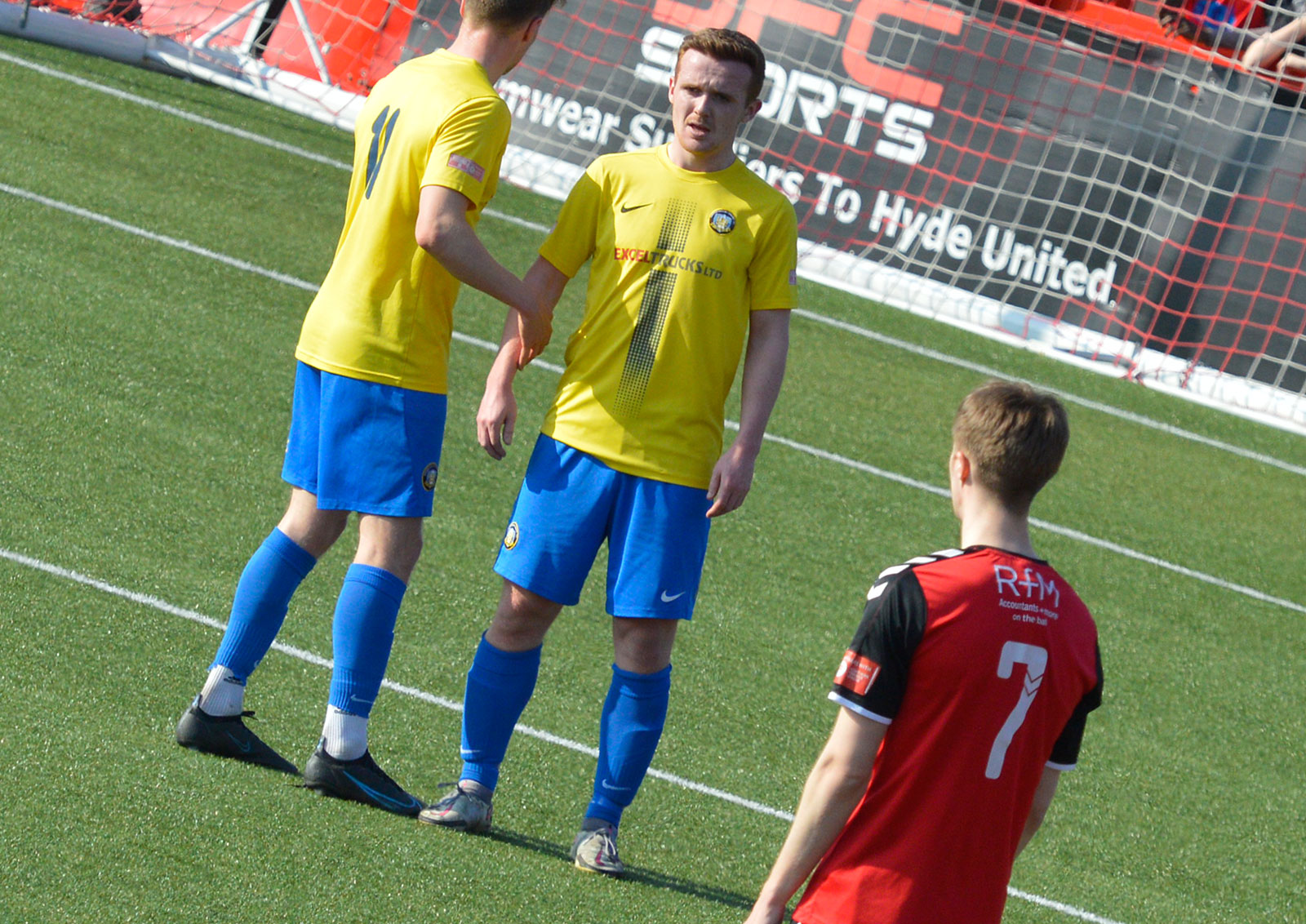 half volley. His thumping effort still rising. A Stefan Galinski error saw Jack Dyche through on goal, but with only Yates to beat, the striker fluffed his chance.

On the hour mark, Hyde did have the breakthrough. The Tigers penned Trinity in the defensive third – and as Peplow looked to cut inside, he was able to tee up Earl arriving late to slide the ball low past Yates’ outstretched right hand. Chasing the game, Trinity made changes, throwing on Johnson, Gibson and Hinds, but with plenty of battle, failed to test Green in the Hyde goal.

In fact, with the Holy Blues committing men forward, the better chances fell the way of the hosts. Pratt’s deep cross was headed goalwards by Peplow. Brilliantly denied by Yates, only for the flag to be raised. Neither Peplow nor Yates knew that at the time though, the cat instinctive as he kept his side in the game. Tayt Trusty then found substitute Mitchell who ghosted past a couple of challenges and cut back for Trusty. The effort scrambled cleared off the line as the hosts threatened to extend their advantage.

Keane curled a dangerous freekick into the box, Gibson doing well to keep the ball in the danger zone. Isaac Rice’s stabbed effort blocked by Green and cleared to safety. There was still time for Yates to make another flying save as he dived to his right to turn away a well struck Peplow freekick from twenty-five yards, before the home side shut up shop and held out for all three points.

Next up for Trinity is the visit of title chasing South Shields. The perennial promotion chasers arriving in Lincolnshire next Saturday two points off top of the table Buxton. It will certainly be a tough game for Tom Shaw’s Holy Blues. But one the side are sure to relish, having only twice tasted defeat on home turf, in the league. So be sure to turn out and back Trinity – as we look to add to our point tally in the remaining fixtures of the 2021/22 league season.