Gainsborough Trinity left it late to secure a draw against title chasing South Shields, courtesy of a Stefan Galinski header deep into second half stoppage time. A goal that was no less than the Holy Blues deserved for a fearless second half performance, where every man put in a tremendous effort and came out with immense credit. Rocked by the loss of two experienced mainstays, Neal Bishop and Cieron Keane, who were forced to miss out due to injury, Head Coach Tom Shaw made four changes in total to the side that was beaten by Hyde United last time out. Callum Minkley and Joe Parkin came back into the starting eleven, slotting into a reinforced back line. Morgan Worsfold-Gregg was handed a start in the middle of the park, while Cameron Johnson, made a first start since injury, deployed behind the front two of Jovon Makama and Freddie Draper.

The opening exchanges were fairly evenly balanced as both sides struggled to really gain any positive forward momentum. South Shields kept the ball well, but lacked the penetration one would have expected for a side chasing the title. It was the visitors Darius Osei who went closest, first, as he ruffled the side netting with an effort from the edge of the box. But with Johnson a constant threat in the number ten role, he then created an opportunity for himself as he combined with Makama. A neat one two saw Johnson through on goal, but with the goal at his mercy, he didn’t trouble Myles Boney in the Shields' goal. The ball didn't run true for the former Peterborough Sports front man.

A spell of pressure from the visitors saw the Mariners win a plethero of corners, before Dillon Morse arrived unmarked at the back post to nod home a Robert Briggs corner kick from a Shields left flank delivery. Not willing to lay down, Makama nearly had the Holy Blues back on terms. Prosper Keto’s long throw was helped on by Stefan Galinski only for Makama to head into the side netting at the near post. At the other end, Osei then went to ground appealing for a penalty, but as the referee had done for most of the first half, allowed play to continue. Richard Eley keen to put in an unfussy, uncomplicated performance in the middle of the park. A first half that saw Trinity go in 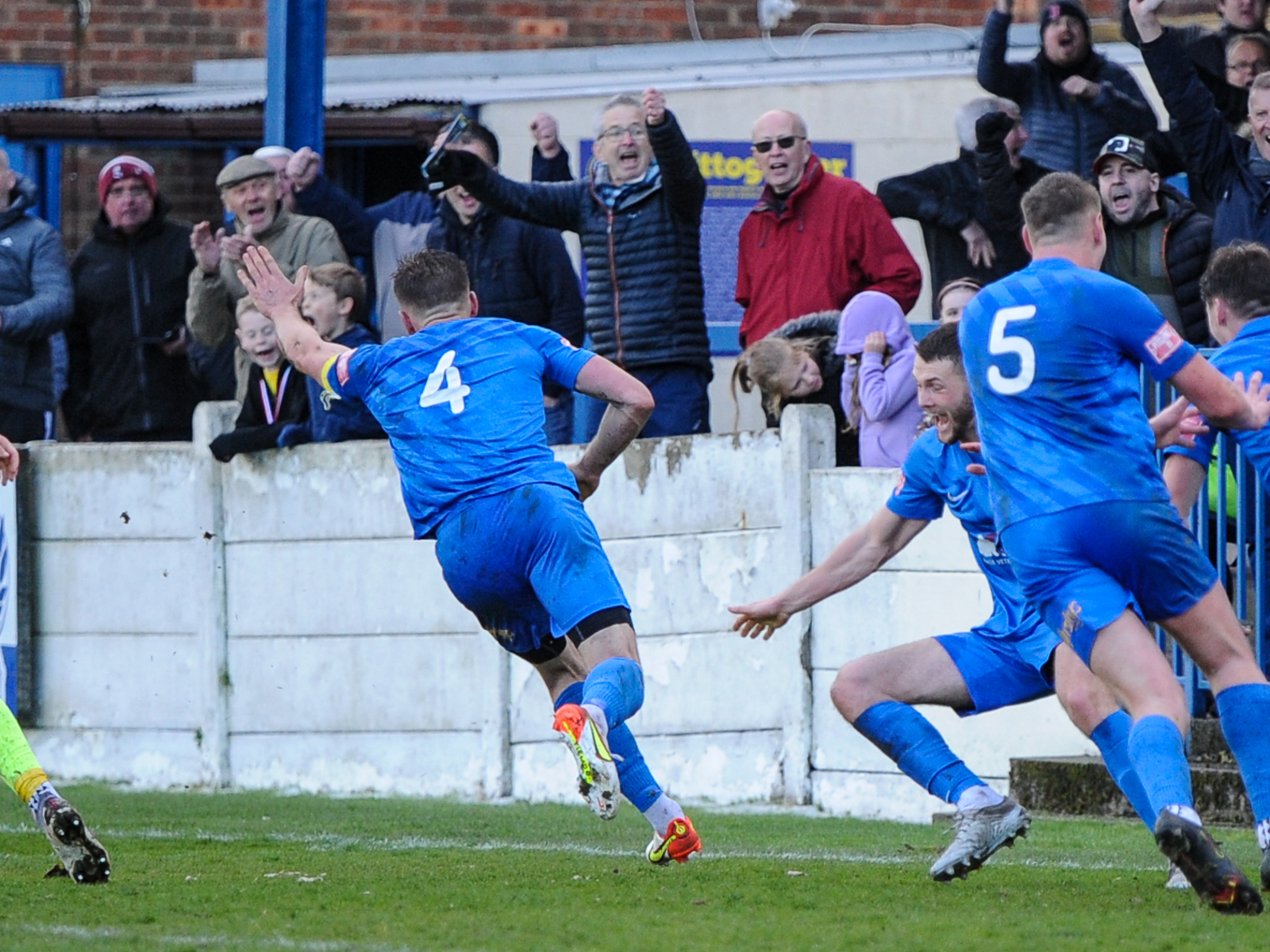 a goal down, having shown the visitors a little too much respect. Half time: Gainsborough Trinity 0 South Shields 1

Gainsborough came out for the second period rejuivinated. Boney, between the sticks, didn't look convincing when the ball was put into the mix, failing to cleanly gather a couple of Trinity centres. But when Worsfold-Gregg swung a corner in direct. The home side's celebrations were abruptly halted by the blast of Eley's whistle. An infringement not visible from anywhere within the confines of the Northolme.

Shortly after, Galinski swivelled to fire straight at Boney from another Worsfold-Gregg corner. Johnson was next to make life difficult for the Shields defence. Following Keto's twisting and turning on the left, Johnson took up the running, only to see his effort narrowly deflect wide of Boney's left hand upright.

Johnson again looked to create. Surging forward over halfway. He created room to shoot - only to be denied by Boney flying high to his right, to tip away the forward's effort.

At the other end, JJ Hooper squared for Osei, but when well placed the ex Stalybridge front man failed to trouble Matt Yates, in the Gainsborough goal. Hooper himself then fired over as The Mariners looked to extend their lead. But it took a brave block from Jack Bodenham to deny Makama inside the six yard box. Will Jenkins then saw his effort from twenty yards blocked by Parkin as the game ebbed and flowed.

The biggest drama was still to happen as five added minutes were added. Galinski, thrown up top to add presence to the home offensive threat, won a free kick inside the 'D'. Teenage talent Makama stepped up to strike the resultant free kick off the inside of the post. Substitute Alex Wollerton inches away from connecting with the rebound.

It didn't look as though time would be the Holy Blues' friend, but try telling that to Keto, Gibson and Ahui who all looked to drive Gainsborough forward. The latter drawing a foul from Briggs. The set piece providing one last opportunity for Worsfold-Gregg to deliver. And he did, combining with Galinski to send the Carlilse Street delirious. Galinski's powerful header drawing Trinity level. The least Gainsborough deserved from a super second half display.

There was one last chance for South Shields to break home hearts, but Isaac Rice was alert to snuff out the danger - and send the visitors back to the North East, with tails between their legs.