Tom Shaw's Gainsborough Trinity gave their all as they threw the kitchen sink at League Two side Scunthorpe United in the final of the Bluefin sponsored Lincolnshire Senior Cup. Joe Parkin's close range header reducing the arrears, but despite being roared on by nearly 300 Trinity voices, the Holy Blues couldn't quite manage to take the tie to penalties. Head Coach Tom Shaw made two changes to the side that started against South Shields at the weekend as George Hornshaw and Jack Gibson replaced the injured Callum Minkley and Freddie Draper respectively. There was a spot in the squad for Harvey Rodgers amongst the substitutes. The youngster having impressed in the U21s this season.

Trinity started the game looking to press, and Jovon Makama did well to win the ball back down the right hand side. His centre well defended at the near post. Before at the other end, a slick passing move almost released Sam Burn through the middle, but the number nine lost his footing as he raced through on goal. Scunthorpe playing at a good tempo, kept the ball well. Fin Shrimpton in the middle of the park, always available and looking to link the play. But good pressure enabled Cameron Johnson to have the first clear sight of goal when he shot straight at Owen Foster from the edge of the box. His attempted eye of the needle ball to Jack Gibson was cut out, the experienced forward making half a yard to get his effort away.

The Iron were expansive in their play, as they looked to play out from the back at every opportunity. Cameron Wilson a threat down the right as he looked to flash balls across the face of the Gainsborough goal. Galinski looked to release Makama down the right, the tall forward helped to the ground by the retreating home defender, but any appeals for a penalty were waved away by Mr Sawden. Moments later within a second or two, Wilson and Jack Moore-Billam both went to ground in the Trinity box, with the referee again unmoved.

Following a foul by Elicha Ahui, Alfie Beestin shot straight at Matt Yates, as he drilled an effort under th 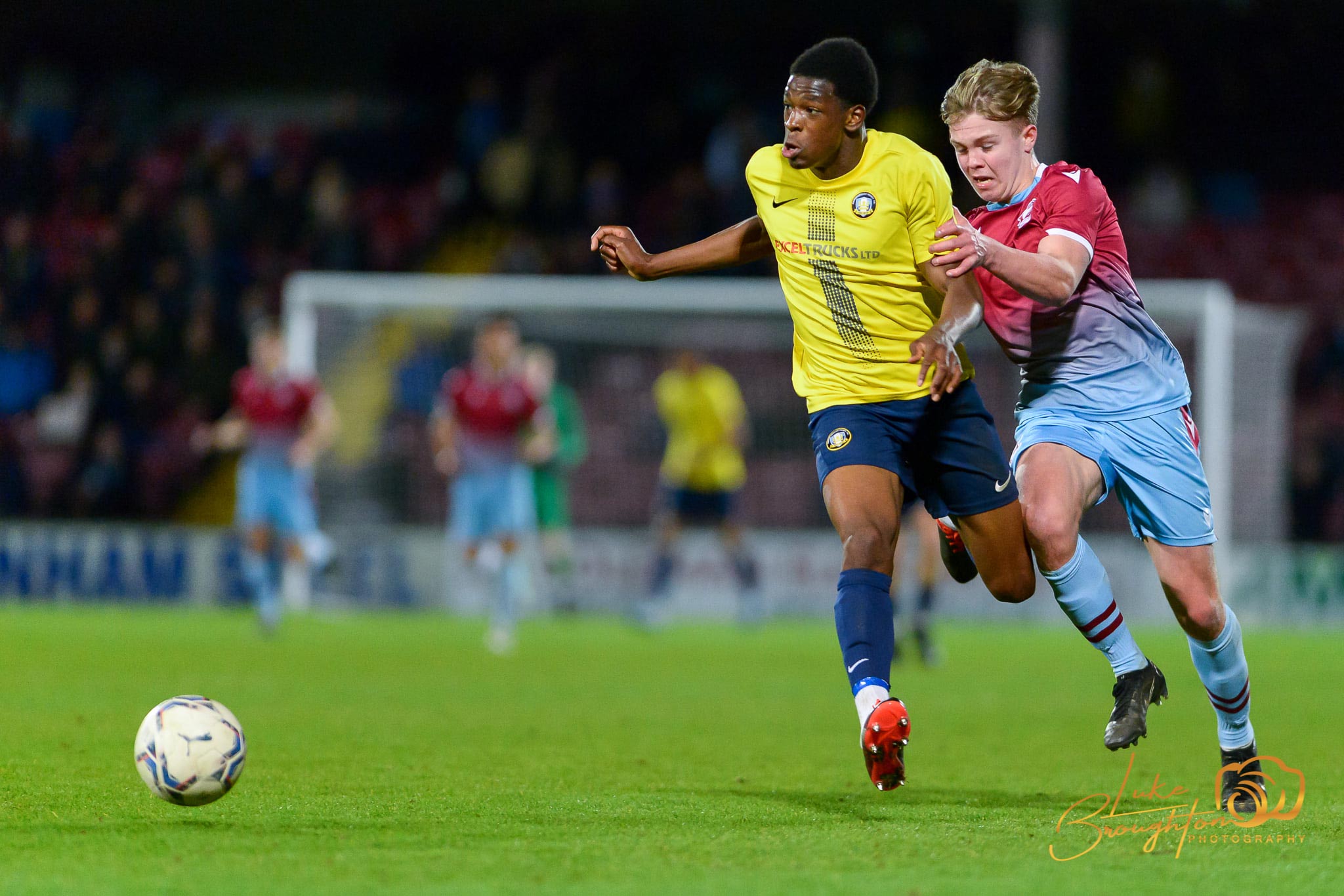 e jumping wall. The goalkeeper in the right place to smother comfortably. On 26 minutes, Prosper Keto limped out of the action, Tom Cursons being thrown into the fray, as Shaw shuffled his pack. But it took a few minutes for Trinity to regroup. Moore-Billam finding time and space in the box, before drilling left footed into the side netting.

Overloading down the Gainsborough left, Yates was called upon to make a fine double save on the half hour mark. Blocking bravely from Burns, he somehow turned away the close range follow up from Beestin. Unfortunately, he could do nothing shortly after when Harvey Cribb poked home from six yards out, to put the home side in front after Gainsborough switched off from a corner, Burns getting to the byline and pulling back for the midfielder who arrived on time, took a composed touch and poked the ball past the unsighted Yates.

Trinity weren't about to give up the fight - and Foster had to be alert to tip an Isaac Rice header over the bar from Morgan Worsfold-Gregg's corner. But five minutes after conceding the first, Scunthorpe doubled their advantage as Beestin did get his name on the score sheet as he doubled the Scunthorpe advantage. Controlled play by the Iron saw Shrimpton find Burns on the right. His precision ball found the head of Alfie Beestin, who headed home from close range, off the underside of the bar, striking Yates and creeping into the back of the net.

Scunthorpe continued to threaten, with Moore-Billam testing Yates’ handling, before Beestin tried to round the Trinity ‘keeper. But Yates stood up well to keep the Iron advantage to two. Makama did well to drive into the Scunthorpe box, his cross shot found Cursons, but the substitute couldn't keep his effort under Foster's bar. On the stroke of half time, the Blues lost skipper Stefan Galinski to inury, as again Shaw reorganised the group, with Rice and Parkin paired up at centre half. Hornshaw and Ahui slotting into the full back positions, as Wollerton was introduced to try and unlock the Scunthorpe defence. Half time: Scunthorpe United 2 Gainsborough 0

Gainsborough Trinity came out for the second half with renewed purpose. Johnson’s acrobatic effort, though wide of the target, immediately lifting the spirits of the travelling Trinity faithful. Makama and Hornshaw then combined well down the Gainsborough right, the latter unable to pick out a yellow shirt in the centre.

The Holy Blues’ positive start to the second period was soon rewarded though, when Joe Parkin was able to nod home Worsfold-Gregg’s corner, at the back post, having got himself free from the Iron defensive shackles. Patient build up from Tom Shaw’s men, saw Tom Cursons keep possession as he worked the forward line well, popping up on the right hand side to float a sublime cross to the back post, Gibson arriving late with a towering header that fell the wrong side of the upright, under extreme pressure from Luke Matheson.

Home skipper Dan Galimore marshalled the threat of Makama as the forward looked to get in behind. Appeals for a penalty, again going unrewarded. As the game became stretched, Ahui had to be alert to snuff out the threat of the Iron attack, before Trinity substitute Toby Gould found Ahui, but his deflected effort was scooped up by the ‘keeper, as the Iron held on.

Deep in stoppage time, Alex Wollerton found Gibson, and the centre forward did well to find Gould to his right, but as the forward twisted and turned, he appeared to be fouled inside the box – but no decision in Gainsborough’s favour was forthcoming and soon after the full time whistled sounded. Scunthorpe United winning the Lincolnshire Senior Cup for the 21st time in their history. The Holy Blues left to concentrate on the final four games of the PitchingIn Northern Premier League campaign and the importance of retaining Step 3 status for another season, one in which together, we can build, stronger, for the future.