Gainsborough Trinity took great strides towards securing their status with a battling display against a resurgent Mickleover. A goal in each half saw Gainsborough pick up all three points as sides around them dropped points. Most notably with Hyde United going down 0-4 at home to play-off chasing Bamber Bridge, while below the Blues, Basford lost to Matlock enabling Tom Shaw’s men to open up a four point gap on the third bottom Ambers.

Head Coach Shaw was again deprived of a number of first team regulars, with Cieron Keane & Neal Bishop again unavailable for selection. Callum Minkley was also on the sidelines, joined by Prosper Keto – injured in the Lincolnshire Senior Cup Final on Tuesday night, but Shaw was still able to name a strong starting eleven, with substitutes to influence proceedings.

A slow opening ten minutes saw the encounter get off to a nervy beginning. Matt Yates had to be alert to beat away Andy Dales’ effort from twenty yards after he was found by Stuart Beavon. However, on eleven minutes, Jovon Makama thought he’d given Trinity the lead, only for his effort to be chalked off, for offside. Good play down the right saw Wilson link up with Tom Cursons. Cursons drove to the by line and flashed a ball across the face of goal. Makama’s telling touch beating Jonathan Hedge all ends up. Only for joy to be short lived as the Assistant on the far side had his flag aloft.

Eliott Walker then linked up with Andy Dales on the right, his deep cross was met by Beavon, but his header off target didn’t have Yates overly concerned. Shortly after though, Walker’s right wing cross deceived Yates in the Gainsborough goal, but fortunately for the Holy Blues, the ball rebounded off the frame of the goal and back into play, where Trinity were able to clear the danger. 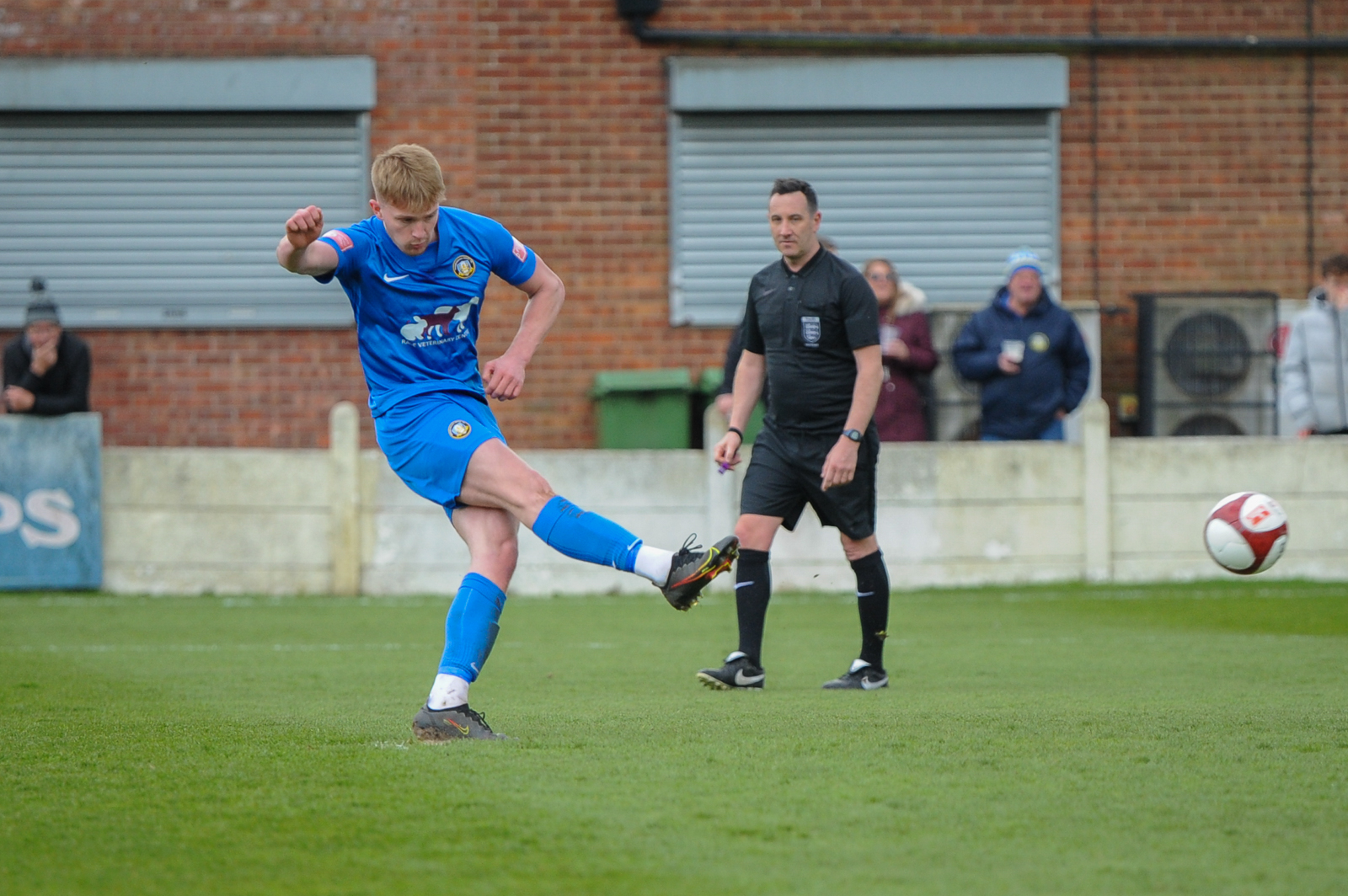 Makama applied pressure in the middle of the park and won the ball back for the home side, clever footwork bought the youngster time as he drew the visiting defence - and he slid in Tom Cursons, with the forward denied by the legs of Hedge in the Sports’ goal.

Cameron Johnson worked tirelessly for the cause down the left, and when he drifted in field, linked well with roving full back George Hornshaw. His placed finish settling home nerves. His left footed finish steered expertly into the far corner. A peach of a finish to open his account for the Blues.

Experienced front man Beavon brought out the best in Yates, as Gainsborough’s number one was down smartly with a smothered save to his right, before Dales was denied with a similar stop. Ethan Mann found Will Radcliffe as Trinity struggled to fully clear an Augustine free kick, with Radcliffe’s effort fizzing narrowly over Yates’ crossbar

For long periods of the second half, Gainsborough were comfortable. Wilson, on his return from injury, saw an appeal for a penalty turned away. Picking up a booking in the process. Harsh indeed on the full back, looking back to his raiding best.

The two ‘wingers’ for Trinity working tirelessly for the team, both defensively, as well as offensively, restricting Mickleover to pot shots from range, as the defence marshalled by the impressive pairing of Galinski and Rice dealt with the visiting threat well.

Dropping deep, Makama was causing all sorts of problems for Sports. Ahui made a nuisance of himself to win the ball back. And as Makama found Gibson, the tall number nine slipped in Cursons. His effort under pressure found its way back to the on loan Lincoln City man, but he couldn’t keep his effort down when it looked easier to score.

Trinity went in search of a second, with Cursons looking to provide an opportunity, twice seeing low crosses into the box blocked at the near post, before substitute Alex Wollerton was felled by Robinson. And up stepped Jack Gibson to double the Trinity advantage giving Hedge no chance from the spot – and continuing the home side’s fantastic form at the Northolme.

Full back Walker again retorted, but his effort from range was comfortably gathered by Yates. Makama then strained his neck muscles to get a header on target – straight at Hedge, as Wilson recycled his own corner from the left.

There was one more chance for the Holy Blues, as late, late sub, Toby Gould slipped a beautiful ball inside for fell substitute Wollerton. He was first to the ball, only to be caught by the onrushing Hedge. But there was no way Trinity were going to be awarded a second penalty of the afternoon. It wasn’t about to affect the outcome of the day though, Gainsborough recording the victory, with a clean sheet to boot.

Three games remain in the 2021/22 PitchingIn Northern Premier League. Two trips to the east coast, with long treks to Scarborough (on Saturday) and Whitby Town (a week Saturday) sandwich our final home league game of the season, when we entertain Lincolnshire rivals, Grantham Town, here at the Gainsborough Martin & Co Arena.