It ended all square in the Bank Holiday Monday, Lincolnshire derby, with the Gingerbreads coming from two goals down in the opening seventeen minutes to earn a share of the spoils. The Holy Blues completing the season having only twice tasted defeat at fortress Northolme. Tom Shaw was boosted by the return of two of the injured players from Saturday with three changes to the initial team selected, as Joe Wilson and Neal Bishop were set to return and Toby Gould was given the nod to start, in place of the absent Cameron Johnson. Morgan Worsfold-Gregg and Tom Cursons dropped to the bench. However, as has been the story of our season - best laid plans and all that, saw Wilson not able to pull on the number two shirt - and Worsfold-Gregg got the eleventh hour call as Shaw was forced into a last minute reshuffle.

In light of the late changes, it was unchanged Grantham who made the brighter start, forcing an early corner, but Elliott Durrell's strike of the dropping ball cleared the Stuart Horsley stand by some distance. At the other end, former Gingerbread skipper and the current holder of the Trinity armband, Stefan Galinski, did brilliantly to escape the shackles of his man to get on the end of a deep Cieron Keane corner, but Galinksi couldn’t keep his header down.

Jovon Makama, up against former blue Ellis Storey, had the Gingerbread running for cover. On fourteen, Makama was at his mesmeric best, he received the ball from Elicha Ahui and twisted and turned before weighting the perfect ball back to Cieron Keane to drill a crisp effort low to Jim Pollard's left and settle home nerves! Moments later, Keane turned provider as he slipped in Gould. Pollard forced Gould wide, but he still managed to square the ball for Makama arriving right on time, Makama smashed the ball off the under side of the bar, bouncing down, it looked over the line, but the flag stayed down, Grantham hacked clear to the edge of the box, where Bishop scuffed wide of the target.

Trinity wouldn't have long to wait for their second though, more link play between Makama and Ahui saw the combination too hot for Grantham to handle. Ahui fouled right on the edge of the box. Wearing the number 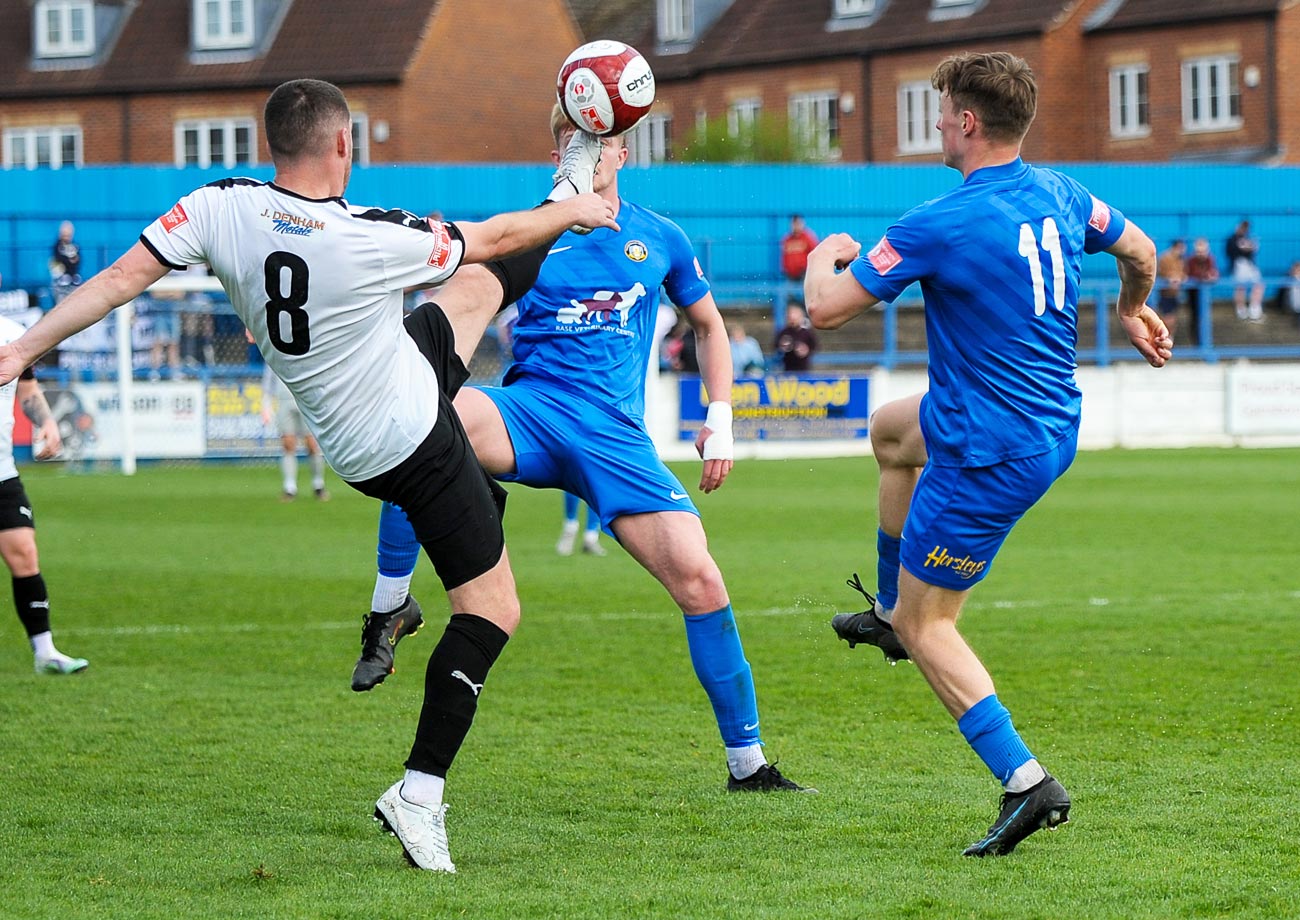 seven shirt, and with a goal to his name already, Keane stepped up to fizz in a dangerous freekick that Galinski helped on it's way to double the Gainsborough advantage.

Five minutes later, Grantham reduced the deficit. Keane adjudged to have fouled, Harry Wood, the foul presenting Steven Leslie with the chance to deliver deep to the back post, where Ashton Hall powered home, giving Matt Yates no chance. George Hornshaw and Toby Gould combined well down the left, when the latter did well to pick out Ahui after he got to the byline, the teenagers’ effort through a crowded box, well dealt with by Pollard.

Trinity quickly reclaimed the ball, Bishop found Keane, who in turn found Makama. Terrorising his full back, the forward made the ball his own down the right, and from the angle flashed an effort goalwards, that Pollard did well to turn over. Half time: Gainsborough Trinity 2 Grantham Town 1

A second half that ebbed and flowed back and forth, but without the pace and verve the Holy Blues had demonstrated in the opening quarter of the first half - and Ashton Hall was on hand at the midway point of the second half to ram home the visitors’ equaliser following another Steven Leslie free kick caused problems for the Trinity defence.

The leveller sparked an immediate response from Tom Shaw's men, but it would be too little too late. Following a foul on Makama, Keane again delivered an inviting ball into the box, Bishop stooped to flash a header across the face of goal, before Makama again looked to conjure something out of nothing, an outrageous turn on the spin, he rifled a low effort goalwards. Pollard stuck out a leg to divert the ball away from goal and towards substitute Bradley Grayson, but Trinity's leading marksman couldn't adjust his feet quickly enough - and the chance was gone, stabbing wide as the goal gaped.

As the game switched from end to end, Shaw's Holy Blues withstood a number of Sisa Tuntulwana long throws and Leslie set pieces, while the ball just wouldn't run kindly for the Blues in the final third. One final surge, deep into stoppage time saw Cursons drive for the box, not once, but twice. The second at pace, he appeared to be felled, only for referee Anthony Tankard to reach for his pocket and caution the forward for his tumble.

A point at home in the Lincolnshire derby, not the worst result to end the home campaign, but from two up, the players would be disappointed not to have finished with a win. It's now on to Whitby Town on Saturday, as we bring the curtain down on the 2021/22 season, looking to end the season in style. Whitby though, stand in our way. Still in with an outside chance of making the play-offs. Only time will tell!