In roasting conditions, Gainsborough Trinity put on a fantastic performance, of free-flowing football to see off Frickley Athletic at the SIKA Everbuild Stadium. Goal machine Bradley Grayson getting off the mark, netting twice from the penalty spot, before one each for Tom Cursons, Jack Dyche & Cieron Keane sealed a convincing victory for Neal Bishop & Damon Parkinson’s new look squad. A late strike for the home side denying Matt Yates between the sticks the clean sheet his performance deserved.

Another experimental squad for the new look management duo, saw Matt Yates play the full ninety minutes, with Isaac Rice again starting in defence. Joe Parkin was in the midfield, with Grayson and Cursons up top. There were spots on the bench for Clayton Donaldson & Jack Dyche for the first time this pre-season, as well as Prosper Keto, Ethan Bojang, Andrew Wright & Keane. The rest of the squad was made up of youngsters from the U21s and a smattering of trialists, looking to catch the eye.

Trinity started the game brightly, with Rice looking to spray the ball out to the full backs who were looking to get forward at every opportunity. One such attack, inside the opening sixty seconds, saw Grayson cut inside from the right, only to see his effort deflected behind for an early corner.

Cursons, playing through the middle was next to have a sight of goal for the Holy Blues. His effort not troubling the home custodian. The two recognisable Trinity forwards were working tirelessly up top, giving the Frickley defence little rest. The two combining to good effect, but Cursons seeing the flag raised, as Grayson’s clever reverse ball found his strike partner.

More alert running in behind saw Cursons first to the ball, as he rounded the ‘keeper – the referee had little hesitation in pointing to the spot. Former Frickley forward Grayson, coolly ( 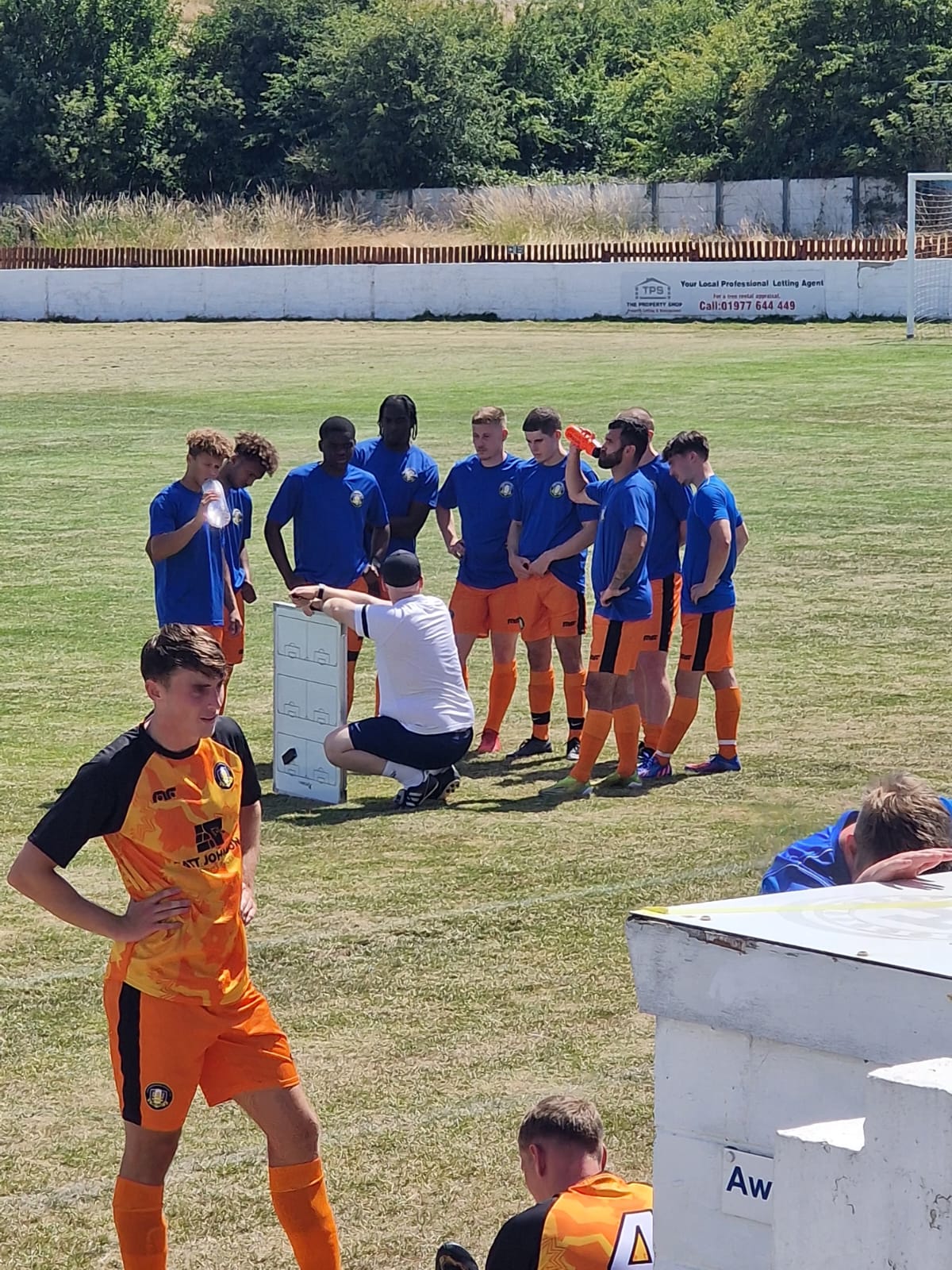 in the sweltering heat) stepped up to send the ‘keeper the wrong way – and give Gainsborough the lead midway through the first half.

Frickley, naming a side of trialists (no team sheet, making a balanced report at times nigh on impossible) broke well a couple of minutes after going 0-2 down. The bustling centre forward progressing forward well, exchanged passes and got a fizzing effort away from twenty yards that flew straight at Yates.

A flurry from the home side just before half time twice saw Yates called into action. First low down to his right, the former Derby ‘keeper did well low down to his right to beat an effort away from the blue shirted number ten. He was alert again moments later when a booming clearance from the home goalkeeper was allowed to bounce. With the nine, gambling in behind – he looked to round Yates, who made himself big and denied the striker his goal.

There was still time just before half time, as Trinity produced a scintillating move from front to back. Against Cursons and Grayson combined. Good interchange saw Cursons pull the trigger – only to see his effort deflected behind for a corner. From that corner, Frickley could only partially clear – but the returned effort skimmed off target

A number of changes at the break – saw the introduction of Jack Dyche for the first time, and it wasn’t long after the restart that Trinity again hit the hosts with a rapid quick fire double. The Holy Blues were patient in possession, playing through the thirds, before raiding down the Frickley right. Our 15 cutting back for Cursons to convert from twelve yards after he had been involved earlier on in the build up.

Looking to keep the ball, Trinity quickly looked to move the ball forward and took the ball well into the final third. Trialist B fed Dyche through, and the former Scunthorpe United & Hyde United man took the ball brilliantly in his stride – and smartly turned home, back across the face of the goalkeeper, to the delight of the travelling Gainsborough following.

Another raft of changes were made by both sides, and Frickley grew into the game again. Winning the ball back, the home 14 did well to pick out the 11 arriving from deep, his header well saved again by Yates away to his right. Before the 14 was involved again, testing Yates with a snap shot before an offside flag was raised.

Trying to play out from the back, Gainsborough were made to pay, when a mis-placed pass into midfield was picked up by the Frickley seven. And in a couple of strides, was able to hit a low right footed effort past the outstretched right arm of Yates. No more than the home sides’ toils in the heat deserved.

The tangerine clad Holy Blues stuck to their principles though, continuing to play out from the back. Clayton Donaldson, on as a second half substitute making his bow for Trinity came short and used all of his experience to release Keane down the left. The Irish man’s whipped in ball across the six yard box, a couple of inches too high for the experienced front man – and there wasn’t to be a dream start in front of goal for ‘The Don’ on debut.

Soon after, Donaldson again secured possession, with some neat control. Making light of the extremely hard surface, Andrew Wright worked the ball out to Keane. And his crisp left footed strike from the edge of the box restored the visitors four goal cushion.

Next up for the Holy Blues in pre-season is the visit of Boston United to The Dave Longstaff Martin and Co Arena. Advance tickets are available to purchase online through our online portal here. Buying in advance will enable you to beat the queues at the turnstiles. Get yourselves along and cheer on Damon Parkinson and Neal Bishop's exciting new look squad as it continues to evolve.