Gainsborough Trinity and Cleethorpes Town played out an entertaining one all draw at the Dave Longstaff Martin and Co Arena on Friday evening, in the Holy Blues’ penultimate pre-season friendly ahead of the 2022/23 PitchingIn Northern Premier League curtain raiser. Clayton Donaldson netting his first for the Tangerine Trinity as Gainsborough came back from a goal down to secure the draw.

Joint Manager Neal Bishop again started in a familiar looking line up that featured just two named trialists in the starting line up. The goalkeeper, and the right back. Hayden Cann started alongside the player boss, as Isaac Rice was rested for the opening forty-five having clocked up more minutes than anyone else in pre-season so far. Likewise, Andrew Wright was amongst the substitutes as Cieron Keane, Liam Waldock and Ethan Bojang made up the midfield trio. Dyche – Grayson and Donaldson provided the three-pronged attack from the start.

Both teams looked to move the ball well, using all of the lush Northolme playing surface, with Trinity looking to hit the visiting Clee early. Grayson working the ball out to West on the left hand side, the former Sheffield Wednesday full back’s first time ball on the run was just taken away from Jack Dyche by Clayton Donaldson as the Holy Blues got men into the box.

The trialist ‘keeper had to be alert, when Tom Jackson’s long clearance was allowed to bounce, but Jack McMenemy went down under pressure in the box in the thirteenth minute, with the referee pointing to the spot, with McMenemy dusting himself down and stepping up confidently, but his spot kick was brilliantly beaten away by the trialist keeper.

Cleethorpes didn’t have long to wait for the breakthrough though, following good possession Small 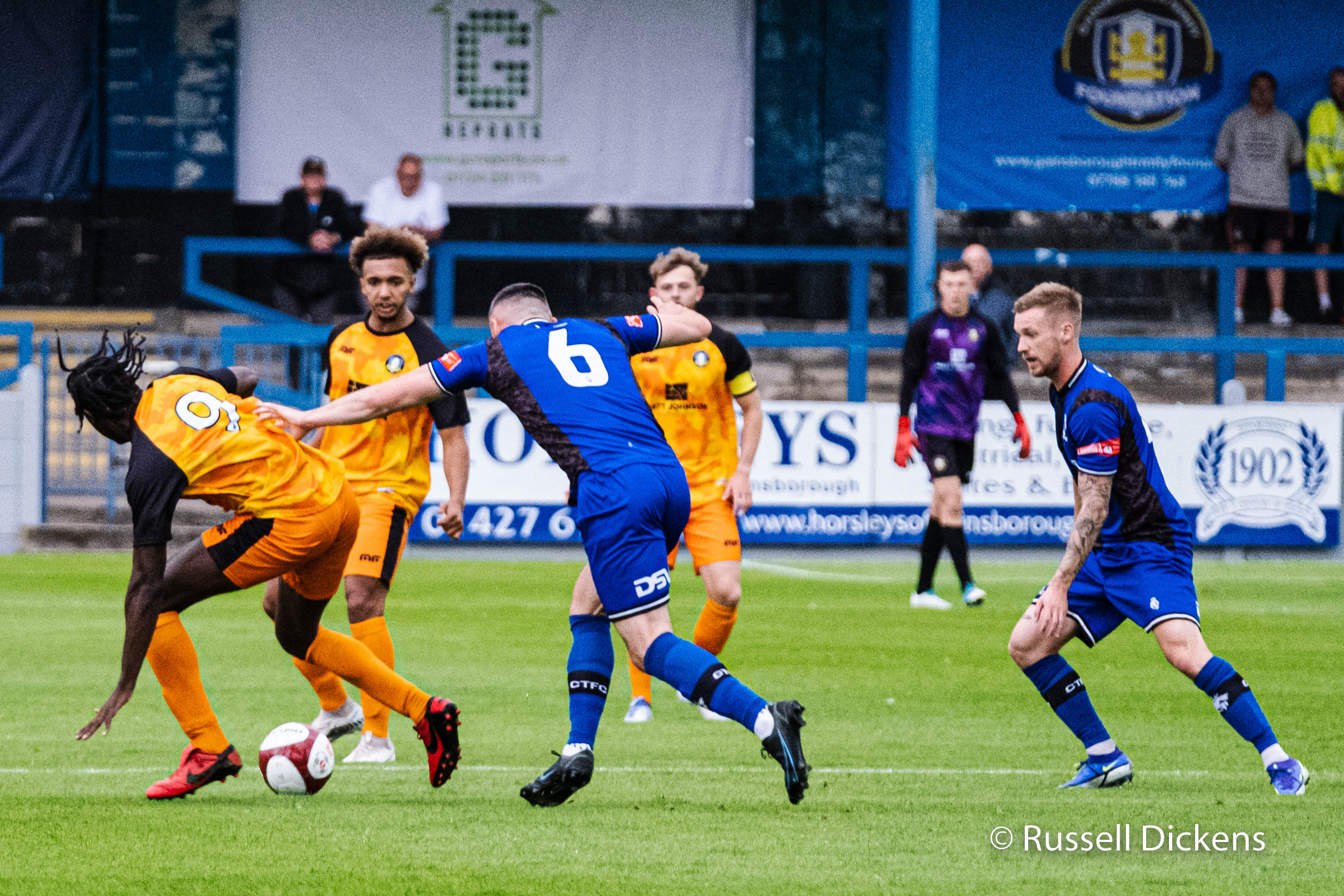 er found Oglesby, the Clee left winger, who honed in on the cut back to place his finish beyond the ‘keeper and give the visitors the advantage. From a right wing corner, Cleethorpes struck wide before a loose ball in the middle of the park was read by Declan Howe, who bore down on the goal, only to see his effort well saved by the ‘keeper at his near post.

Trinity were keeping the ball too – and looking dangerous, with Ethan Bojang looking to pull the strings in the middle of the park & one eye of a needle ball found a brilliant run from Donaldson, who took the ball brilliantly in his stride – but as he took the ball under his spell, he appeared to be hauled to the ground. But not in the view of the referee, who awarded the freekick against the veteran striker.

Shortly after another flowing Gainsborough move saw a Grayson snapshot parried by Jackson in the visiting goal, with the predatory Donaldson on hand to force home the equaliser.

Hayden Cann read the danger well to sweep up, but again a loose ball threatened to undo Trinity’s hard work, but a routine stop down to his right, denied the Cleethorpes number seven.

At the other end, Grayson was causing problems with his trickery and direct running, looking to put balls into dangerous areas

Following a number of changes the second period never really reached the heights of the first, but Liam Waldock was ever involved in the heart of midfield, looking to make things happen. Purposefully striding forward, he found Grayson on the left apex of the area, with the forward checking inside before firing straight at Jackson.

Following a goalmouth scramble, Venney flashed an effort wide of the target before Will Annan saw his shot on the turn blocked by Cann. Surging forward, Grayson released Bojang in the inside right position, but his effort fizzed a few yards wide of the near post. The high press secured possession for the tangerine Trinity, ending in an Andrew Wright strike, which drew a save from Jackson.

A flowing five man move ended with the trialist left back, on at the break for Joe West, linking up brilliantly. His effort was well saved by Jackson – but it wouldn’t have counted anyway. A flag up for offside, would have cut short any celebration.

Cleethorpes’s final couple of attacks saw a long-range effort wide of the target & an impudent backheel comfortably gathered by the trialist shot stopper as the Owls’ forward tried to harness his inner Alessia Russo, before Waldock had the last meaningful strike of an entertaining evening’s football. His twenty-yard strike deflected behind for a corner, and a draw seemingly the fairest of results.