432 people witnessed Gainsborough Trinity end pre-season with a victory over a youthful Doncaster Rovers side, that contained four players with first team experience. Emerging victorious by a goal to nil. The only goal of the game, an own goal arriving on the fifteen minute mark. Naming another strong squad, with a number of trialists cut from the game with Cleethorpes Town on Friday, Neal Bishop rested himself, as the Tangerine Trinity shuffled the defensive pack. Bojang, Waldock and Wright again teamed up in the heart of midfield, while Donaldson, Dyche and the young, trialist wing man made up the three pronged attack.

Immediately the tangerine clad Blues looked to get on the front foot. Jack Dyche getting off the first shot in anger, though it didn't work the Rovers' custodian. Jack Goodman did work the Gainsborough trialist 'keeper, making his second appearance of pre-season soon after. The next goal mouth action came a quarter of an hour in, and it lead to the only goal of the game. Joe West got down the near touch line, his ball into the danger zone was helped on by veteran Donaldson. Waldock, arriving late was sent tumbling, but with play allowed to continue, Rovers' defensive clearance rebounded off a red and white hooped teammate and beyond Tom Chambers. The goalkeeper with no chance to react. In bizarre fashion Trinity had the lead, but it was no less than their play deserved.

Darius Smith was looking to get forward from right full back, and a move down that side drew warm applause from the Ping Stand as he looked to feed Dyche. The ex Hyde man, on the stretch, worked the ball in towards Donaldson. A nearly moment, but one the Trinity faithful could appreciate.

Charlie Seaman worked the Gainsborough goalkeeper midway through the first half. The young trialist acrobatically springing into action to preserve the home side's advantage. Another good move down the right finished with a Donaldson effort on the spin that was deflected behind for a corner. A corner Pro 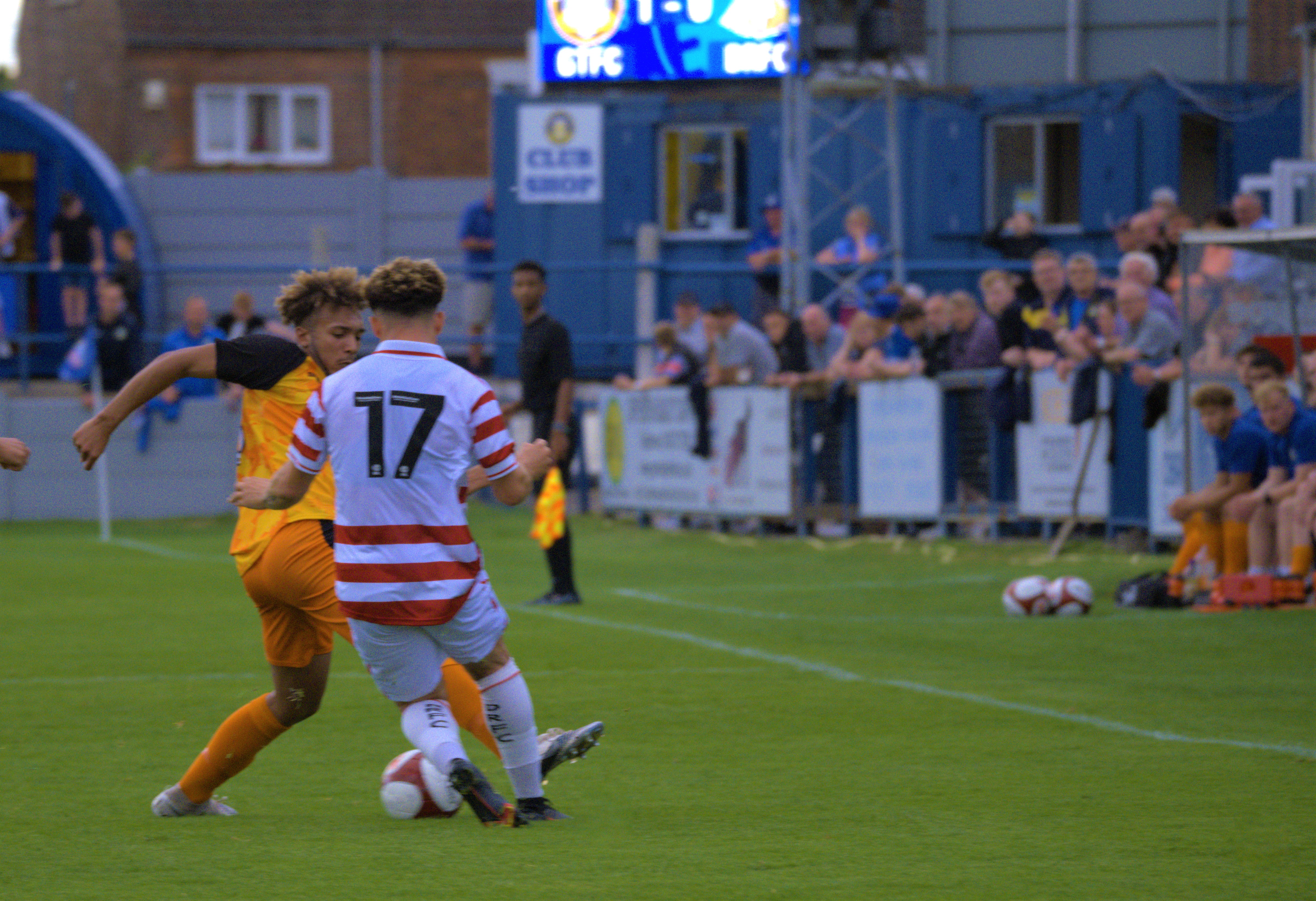 sper Keto - up from the back - rose highest to meet. Unfortunately, the direction of the header didn't match the timing of the leap.

Ethan Bojang was looking to impress, putting a foot in to win the ball back and in possession showing a confidence on the ball to unlock the visiting defence. With the outside of his right boot, he invited Smith to come forward on the overlap. Smith's cut back found Donaldson, but the marksman couldn't find the target - this time!

Smith again asked questions as he fizzed another dangerous ball across the face of the Doncaster goal, before the Gainsborough 'keeper was called upon, showing good reactions to divert an angled Seaman strike over for a corner.

Attacking the Stuart Horsley Stand-end for the second half, Liam Waldock looked to get Trinity on the front foot early. His jinxing run came to an abrupt end just before entering the Rovers' penalty area. To the right of centre, Joe West stepped up to bend a free kick around the wall. Chambers was equal to it, parrying the shot away from the danger zone.

Early in the second half, Keto abandoned his centre back duties, striding forward in his more familiar position of right back. He teased in a dangerous centre that Rovers just about dealt with, putting the ball out for a corner which Donaldson couldn't hook on target. Muted appeals for a visiting penalty went unheard. Kuleya looked to make things happen, his centre looking for substitute Scattergood, who went to ground, the referee happy for the game to continue.

As substitutions started to punctuate the flow of the game, there were a few moments of quality to hint at hope for the followers of the Holy Blues. Grayson's never-say-die attitude won the ball, and West swung in a delightful ball for Donaldson - who despite his neck coiled, ready to power the ball home - didn't time the connection. At the other end Seaman didn't give up on what appeared to be a lost cause & won his side a rare corner. Trinity dealt with that and looked to attack again themselves, a cute Donaldson backfield saw Under 21 prospect Tristian Drummond in on goal- but he arrowed his rising effort narrowly wide of the right hand upright.

Kuleya, possibly Doncaster's most dangerous player, looked to fashion an opening for himself, but after riding a couple of challenges, he would be disappointed not to have made the young goalkeeper work harder. Grayson then picked out Drummond with a cross-field ball, and the youngster provided an early ball in that picked out Donaldson who thumped his header wide. Wright and Grayson had further involvements in the final third, but couldn't add to the Gainsborough goal tally, before deep into added time at the end of the second half, Trinity stood up well to a final rallying press from the visitors to secure victory ahead of the league campaign opening, a week on Saturday.