Gainsborough Trinity made it four points from six, with a one all draw with Hyde United on Tuesday night. In a pulsating, end to end game, Trinity took the lead five minutes from half time only to be pegged back, before both teams had chances to win the game - but both had to be content, settling for a point in monsoon-like conditions. In a rare scenario, both teams named an unchanged starting eleven. The Holy Blues in fact, only making one change as Brad Grayson returned to the bench having served his suspension from the red card he picked up in the play-off Semi Final, whilst away with Rossington Main at the end of last season.

Both sides wanted to get on the front foot in the opening exchanges, that quickly set the tone for an entertaining and engaging encounter. Jack Redshaw had the first sighter of goal, when his effort was comfortable for Yates to gather. Against his former club, Jack Dyche was looking to link up and spin in behind, but he was being well marshalled, while at the other end Redshaw was drifting from left to right, looking for pockets of space. And it was the diminutive Redshaw who linked up with Liam Tongue, only for the midfielder to pull his effort harmlessly wide of the far post.

Isaac Rice’s raking cross field ball invited Bojang forward from full back, where he, Andrew Wright and Dyche combined well. Fagbola half clearing the danger, with the ball falling for Waldock on the edge of the box, but his strike wasn’t clean, and the goalkeeper was left untroubled.

The game was being played at a quick tempo, following a Bojang foul on halfway, the visitors looked to play quickly on the slick playing surface, and Redshaw stung the hands of Yates from the edge of the box. For Trinity, Dyche then did well down the right and cut inside, but he struck across the ball as it faded away from the far post. Both sides were pressing and looking for openings though.

Warne then found Dyche infield, Jack looked to get Trinity moving forward again, and as Dona 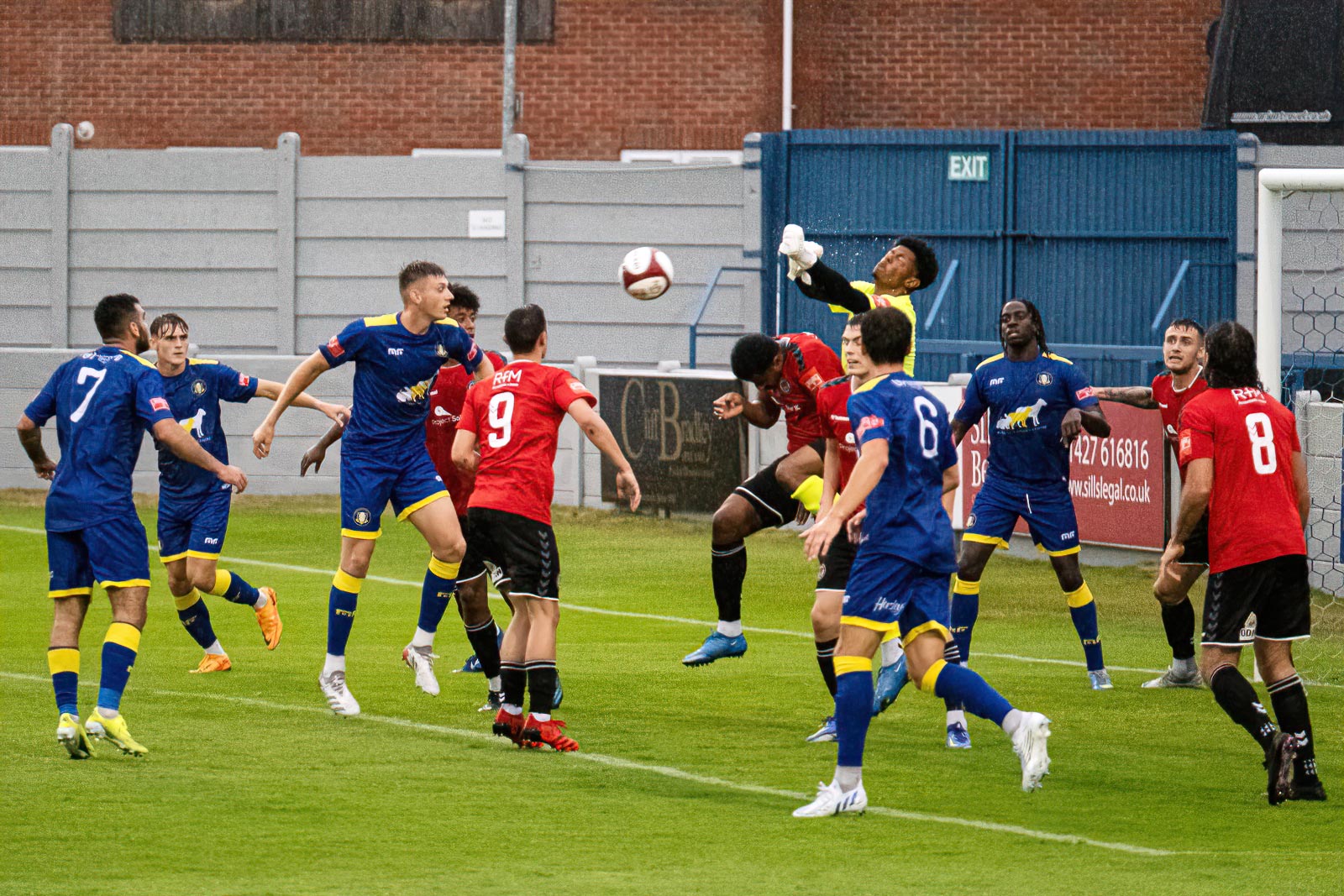 ldson peeled off into space, he was able to get a shot away that was charged down on the edge of the box. Trinity tried to secure possession again as the ball bobbled around the box, but the visitors cleared, to hang on for a little bit longer.

A Joe West corner was headed goal-wards, but subsequently scrambled away, as Hyde had men back in numbers to defend against the Trinity attack, before Hyde exerted some pressure of their own. Redshaw forcing Yates to take action, before Ditchfield kept the ball in the danger zone. Only for Cann and Rice to stand firm. Warne was finding himself in the right place to break up the visitors attacks, but the Holy Blues weren’t quite able to find a blue shirt for some respite.

A kind richochet saw Redshaw in on goal, and in a matter of seconds, Matt Yates was called into action. Making a strong one handed save, he reacted well to make a brave smothering stop, that then saw the Holy Blues turn from defence to attack. Bellagambi sliced his clearance and pinball ensued as Clayton Donaldson and Jack Dyche were unable to find a way through. The visiting goalkeeper making an unbelievable save to keep the score line level.

Just past the half hour mark, Cursons linked well with Donaldson, but he dragged his shot half a yard wide of the post. Five minutes before the break, Donaldson stole the ball from Fagbola and raced goal-wards. As the veteran front man opened up his body, he was felled by the on loan Huddersfield stopper. Denying a clear goal scoring opportunity, the man in the middle pointed to the spot, but was less decisive as he opted for yellow. Belladonna guessed right, but skipper Andrew Wright's strike from twelve yards was crisp and true, nestling in the back of the net to give Gainsborough the advantage.

Jack Dyche could have further added to Gainsborough’s lead a couple of moments later, when another Fagbola clearance went wrong, with the ball skewing off his boot, Dyche nipped in, and seeing the ‘keeper off his line, looked for the spectacular lob that didn’t quite come off.

Gainsborough came out with their tails up at the start of the second period, with Gio making a string of smart stops to stop Trinity pulling away. Bojang coming forward from right back, linked well with Dyche, who’s clever ball freed Waldock. The former Owl cut inside, but saw his effort tipped over by Bellagambi. Waldock was again denied a moment or two later. Donaldson retrieved the ball, and picked out the midfielder, in space, in the box. But a big flourish from the goalkeeper, deflected the ball away.

Donaldson was pulling the strings for Trinity, and next he teed up Dyche, but leaning back, he couldn’t keep his effort down. And the Holy Blues were made to pay for not grabbing a second. Half an hour from time, Hyde equalised through Tayt Trusty as the Tigers worked the ball from left to right got down the Gainsborough left. The ball across the face of goal found Trusty in space- and his shot deceived Yates, with the aid of a slight deflection, to level things up.

A well worked free-kick saw Gainsborough hit the frame of the goal, when Bojang and Grayson combined. The substitute picking out the powerful run of Hayden Cann, up from the back. The Lincoln City teenage centre back rose well, but his powerful downward header struck the post and went behind. As the game ticked into over time, neither side were content with a point. Trinity trying their luck with a trio of corners. One of which found Grayson, who looked to cut in on his left foot. Only to see his effort deflected behind.

Desperate scenes, called for desperate measures as the visitors had one last counter attack. Despite a couple of last ditch tackles failing to halt Hyde's progress, the ball found it's way to the ever willing Redshaw. With the goal at his mercy, man of the Match, Matt Yates plunged to his right to make a fine flying stop, to ensure the points were shared.