Gainsborough Trinity and Stafford Rangers played out a goal-less draw at the Dave Longstaff Martin and Co Arena, with both sides extending their unbeaten runs to three games at the start of the 2022/23 Pitching In Northern Premier League season. Trinity with the chances in the first half to win the game, while Stafford will feel they shaded the second - a draw ultimately the fairest of results.

Making one change to the starting eleven, Neal Bishop & Damon Parkinson opted to hand a full debut to Curtis Durose, the on loan Rotherham United youngster. He started the match as fellow Millers' loan man, Mackenzie Warne had to settle for a place on the bench. Trinity came out of the traps fast, flashing balls across the face of goal twice in the opening minutes, but the best chance came on eight minutes when Hayden Cann's ball released Clayton Donaldson. The veteran striker, playing on the shoulder of the centre half, read the flight of the ball better - he managed to bring the ball down, but rifled the ball into the side netting with the Northolme expecting the net to bulge at the Stuart Horsley end.

Undeterred the Holy Blues continued to press in the warm afternoon sunshine, a far cry from Tuesday night's monsoon. And their endeavours were rewarded with a penalty eleven minutes in. A Joe West corner caused havoc in the Stafford box, with Mr Trevethan pointing to the spot, as Ethan Stewart appeared to handle Donaldson’s goalbound effort. Trinity skipper, Andrew Wright stepped up for the third time in as many games, only to see Cameron Belford guess the right way - and keep the game all square. Stafford then throwing bodies in the way as Wright endeavoured to make immediate amends from the rebound, only to be frustratingly squeezed out. 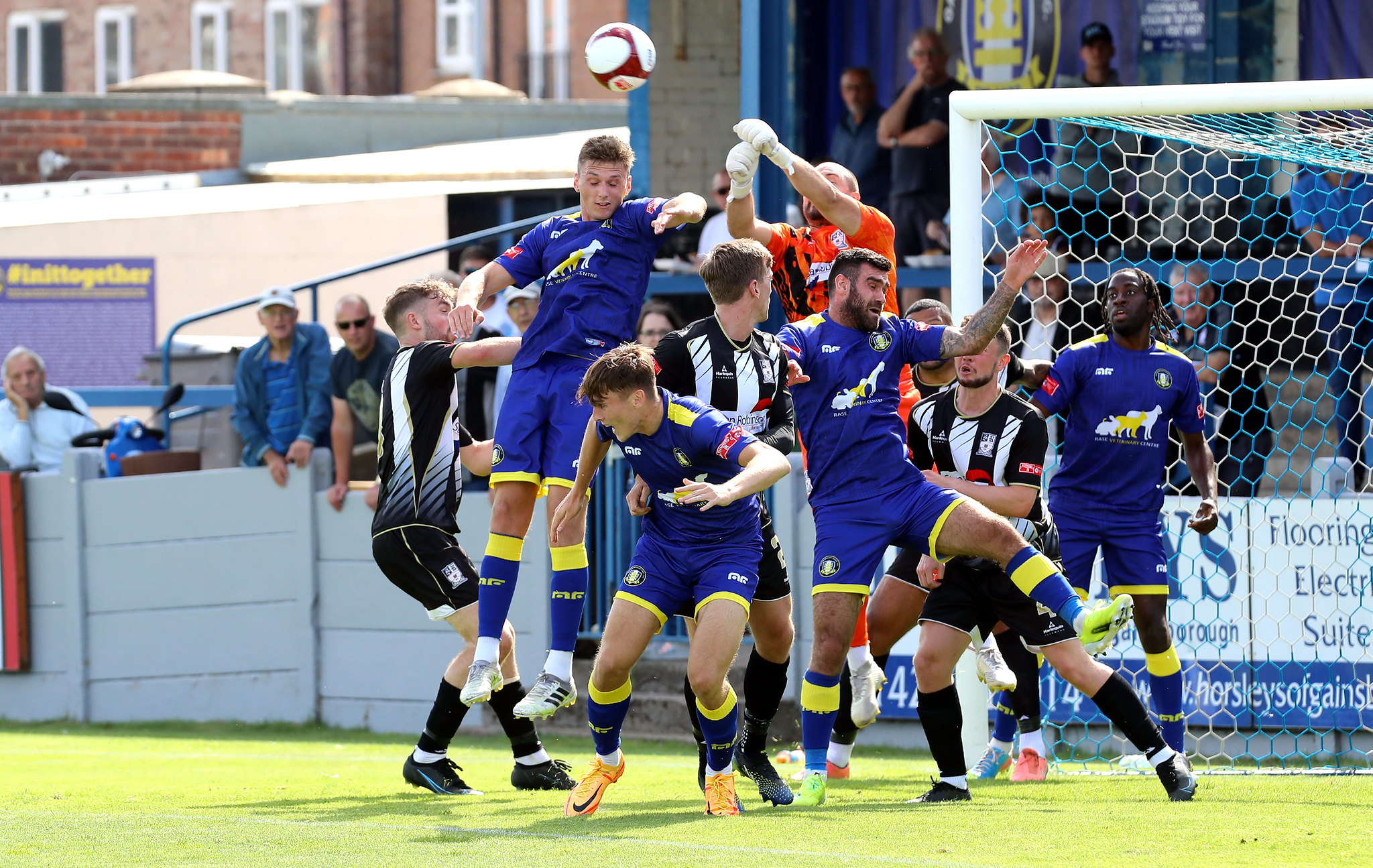 king to play at a good tempo – and take the fight to the visitors, Trinity got on with a restart quickly, with Liam Waldock testing Belford, who pushed his right footed effort behind for a corner kick.

Dogged midfield play from Dyche, Durose & Wright saw the Holy Blues competitive against a robust opposition midfield. Losing the ball initially but giving no quarter, to valiantly win the ball back and get Donaldson in behind again, to win a corner as Trinity continued to press.

On the half hour mark, a rare occasion when Rangers came forward in the first half, Adam Livingston flashed a cross-shot across the face of goal, Livingston again looked to create as he curled in another dangerous ball, but no Stafford man gambled and Yates was able to gather comfortably. Tonks then put a dangerous ball across, but with no black and white shirt gambling.

A patient build up for the Blues saw Cann drive forward from the back and find the feet of Dyche. The Trinity man, twisting and turning before teeing up Waldock. The former Owl, took a touch, and let fly from 25 yards – only to see his effort flicked over the bar, by Belford in the Stafford goal.

Wright and Donaldson worked well to progress the next Trinity attack down the right hand side. Wright’s chipped ball down the channel, finding Dyche who delivered a brilliant cross into the box, which Cursons couldn’t direct on target.

The Management Duo made one change at the break, as they replaced Liam Waldock with Masai Arbouin, handing him his competitive debut – and it wasn’t long before he was involved in the action. Winning the ball back he linked up well with Donaldson and Durose, the latter with a sight of goal, but the on loan Rotherham youngster was unable to work the goalkeeper from the edge of the box. Rangers’ own half time substitute Kiwomya, son of former Ipswich Town and Tottenham Hotspur’s Chris, then inadvertently tested Yates’ concentration, from a wide angle, out on the right – he looked to centre a cross, that ended up drifting towards Matt’s goal. From the resultant corner, Tonks fired over the top.

As the second half wore on, Tonks’ long throws started to become a more common feature of the game. A scrambled effort from one, was comfortable for Yates, before Durose’s effort was blocked and Cann looped a straight forward effort into the hands of Belford at the other end. Durose fashioned himself a chance after militant work in the middle of the park by Wright ensured Trinity could maintain a spell of pressure, without being hit on the counter attack. A fine challenge winning the ball back, to keep the forward momentum, blue.

As the game ticked into overtime, Bojang slung over a great ball from the right, but Donaldson was unable to apply the finishing touches. And Stewart rattled Yates’ cross bar with a header from another Tonks long throw, but as it was, neither side had that final cutting edge – Yates and his youthful defence securing a second shut out in the three opening league games, picking up five points from the opening nine available, to set up an interesting looking clash with South Shields on Tuesday night, with both sides on the same number of points. Trinity left to rue the missed chances of the first half – and what might have been… but there is still certainly to be optimistic about, as the games continue to come thick and fast in the Pitching In Northern Premier League.