To a man, each and every Gainsborough Trinity player can puff their chests out with immense pride, as they went toe to toe with full time South Shields, one of the favourites for the Pitching In Northern Premier League title. And but for a cruel stoppage time strike - would have recorded a famous victory at the 1st Cloud Arena, thanks to Hayden Cann's strike midway through the second half.

With Cieron Keane & Prosper Keto still missing, Trinity were further hindered with the unavailability of Liam Waldock also suffering with a knock, but this gave the management the opportunity to change things up. And that's what the Holy Blues did. Brad Grayson got a first start in place of Jack Dyche & Neal Bishop started at the back as the Blues also changed their shape.

Dylan Mottley-Henry & Jordan Hunter were combining well down the right fit the home side, but Bishop, Cann & Isaac Rice were frequently in the right place, at the right time to clear the danger. And when they weren't, 'keeper Yates was behind them to capably clean up and loose balls. A routine effort was gathered by Yates down low, while at the other end, Gainsborough's front three pressed relentlessly.

Donaldson, Grayson and Cursons would not allow any time for home side to settle into their stride. Curtis Durose shot straight at Boney, as Trinity swarmed like bees, putting the pressure on. Shields wanted o play out from the back, but the visitors really worked hard at unsettling the players and home support

A flash of Mottley-Henry brilliance saw an even more brilliant save from Yates. As the Shields' number seven turned on a sixpence to flash an effort goal wards, Yates flung up a right hand to divert the ball behind for a corner Shields were starting to enjoy 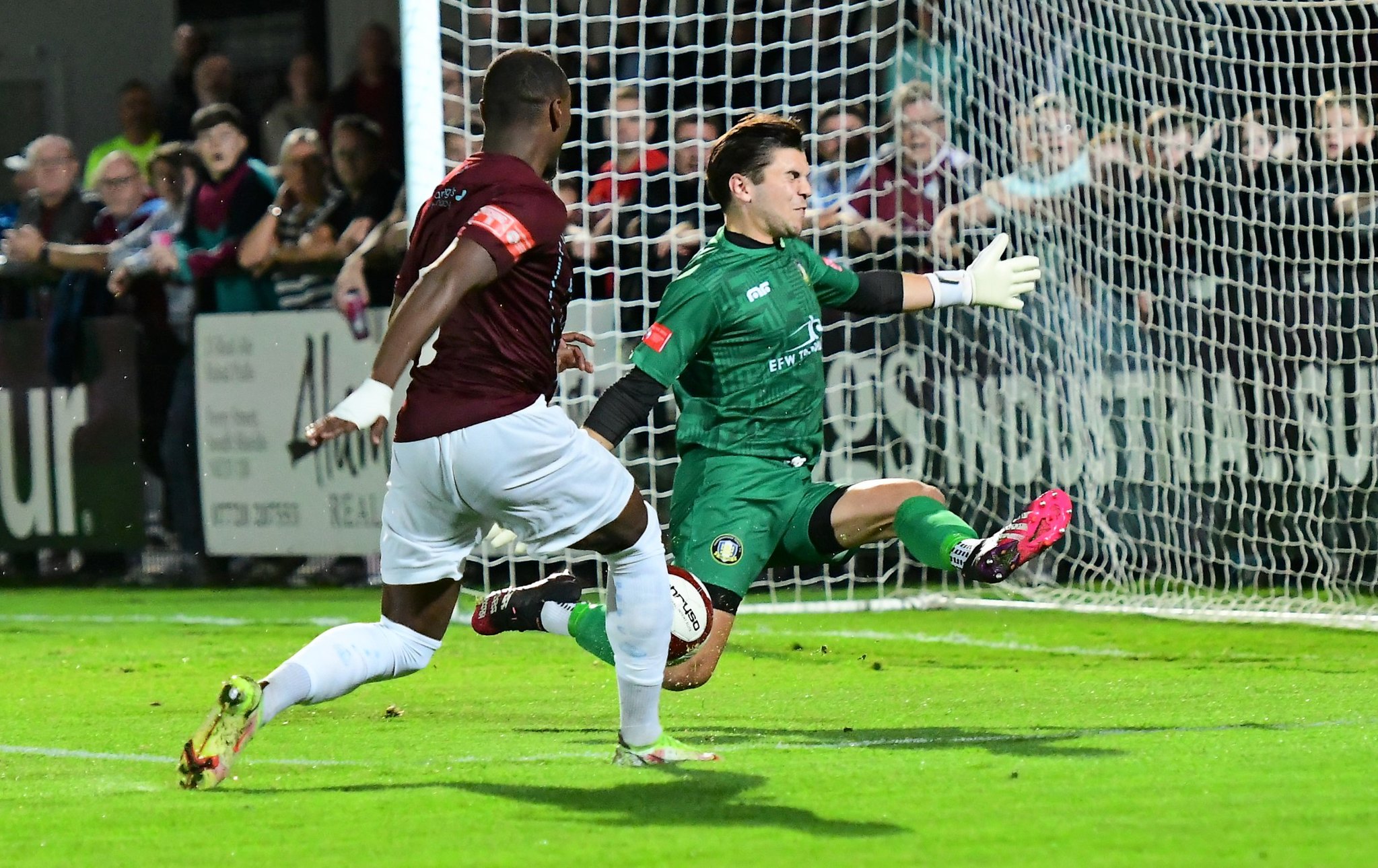 a little spell, which was always likely considering the efforts exerted in the opening half hour. Hunter's delivery was met by Henry, but he headed narrowly over the top,

Offensively, on the left side of the box, Grayson was tying his man up in knots as he twisted and turned Liddle inside out. Mottley-Henry seeing yellow for a high boot that further halted the visitors' progress - but did result in a free kick 25 yards out - Grayson stepped up to float his free kick over the wall. It had the beating of the wall, but not Boney who pushed the effort, at full stretch, behind for a corner.

Ethan Bojang looked to whip the resulting corner in, but it was put behind for another attempt. That one almost paid dividends. And maybe in truth should have provided more. Bishop got across his man, helped the ball on. As Cann powered his header goal-wards, an un-naturally positioned hand stopping the goal bound header - but it wasn't spotted by the referee or his assistant- and the hosts got away with one!

Shields were looking to play some raking cross field balls, but Trinity were holding a good defensive line. And again - when called upon, Yates was on hand to deny Mottley-Henry. Just before half time, West looked to come in field from his left wing back position, only to be squeezed out by several Shields players all converging at once. The Holy Blues deservedly going in at half time on terms. As ever, you expect Shields to ask questions, but the visitors provided a threat of their own - and no goals apiece was the least Trinity deserved.

At the break, Trinity regrouped, but it was the home side that came out of the traps quickly. Twice in the opening three minutes of the second period, Yates was equal to a couple of chances, as the defence worked hard to close the gaps. First Yates flung himself acrobatically to his right to hold Will McGowan’s effort, before bravely blocking at the feet of Mottley-Henry. Yates was certainly proving to be the busier of the two ‘keepers as he gathered well on a couple of occasions as the Trinity backline came under increasing pressure, but boss Bishop was leading by example as he put his body on the line, with a number of firm, but fair challenges to inspire his troops at the heart of the battle.

Trinity were defending well and frustrating their hosts, and having soaked up an awful lot of pressure, were able to relieve some of that, when skipper Wright was able to release Donaldson down the Trinity left, he held the ball up well and drew the foul, which enabled the visitors to get up the pitch.

And Joe West was able to deliver a dangerous freekick in from out on the left-hand touchline. Inadvertently flicked on by a claret shirted Shields’ defender, Hayden Cann found himself in acres of space to take a touch and rifle past the exposed Boney – and give Trinity the lead. Against the run of play, but one the Blues’ resilience and work rate alone – deserved.

Roared on by the vociferous home support, that had been stunned to silence just past the hour mark, the Mariners poured forwards looking for an equaliser, but Yates was a stubborn final line of defence. Rotherham youngster Durose then released Grayson, who saw his effort parried away by Boney, before Donaldson took Liddle to places that he didn’t want to defend, and a cynical foul saw the Shields’ centre back carded.

Trinity managed to navigate the ninety – but the hearts of around twenty hardy blue souls sunk as the board went up to indicate six additional minutes of playing time. Seemingly six of those minutes were played out as Smith for Shields took advantage of tiring legs to blast low past Yates from thirty yards – the ‘keeper unsighted through a crowded box.

Despite the equaliser and the lateness in added time, there was still time for the impressive Donaldson to release the willing run of Durose, but he couldn’t find the finish as he shot straight at Boney. Cann, imperious at the back, got his head to the ball as Shields looked for a winner, but the Blues managed to hold on to the very least they deserved, a point, as they navigated one final corner for the home side.

At the full-time whistle, the players slumped to the ground. Testament as to how far the Holy Blues have come, that a point at the 1st Cloud Arena was a disappointment. But that disappointment can be harnessed by a great deal of pride at the shift put in by each and every one of the players in Gainsborough colours, on a Tuesday night, in the North East.