Gainsborough are in the hat for the Second Qualifying Round of the Emirates FA Cup on Monday (1pm) as we overcame a potential banana skin to progress in the world famous knockout competition, knocking out Loughborough Students with a comfortable victory at the Dave Longstaff Martin and Co Arena on Saturday September 3rd. Neal Bishop and Damon Parkinson resisted the temptation to rotate the squad, despite a hectic opening to the season that has seen Trinity play a game, on average, every 2.7 days. The duo making just the two changes from the Bank Holiday draw with Matlock. Tom Cursons dropped to the substitutes bench, while Ethan Bojang was unavailable for selection. Their places in the starting line up going to George Hornshaw and Jack Dyche.

The Holy Blues looked to get on the front foot early - and not allow the visitors to get into an early rhythm - and Dylan Cogill settled home nerves when he found time and space to turn and fire home Joseph West’s right wing corner, to the delight of the home faithful.as the visitors failed to clear their lines. West then saw his free-kick deflected behind for a corner as the Holy Blues racked up a number of corners in quick succession.

Donaldson then released Jack Dyche, but Dyche dragged his effort wide of the far post. From a quickly taken throw, Loughborough served a warning to the Holy Blues, Josh Wickes was afforded time to turn on the ball and shoot from 25 yards. Matt Yates was untroubled, but it was a sighter non-the-less – and ensured Trinity shouldn’t take the opposition lightly. Hayden Cann did well in the physical battle up against the Students’ front line – and was able to tidy up, going back to Yates. And it was the ‘keepers long clearance that nearly caught the visitors out. Donaldson getting in behind, but seeing his shot blocked as he pulled the trigger. Loughborough not dealing convincingly with the long ball, and Donaldson’s experience.

A number of crosses flashed across the front of the visitors goal, as Trinity probed for a second, but the balls from left and right just too strong for Donaldson to get the telling conne 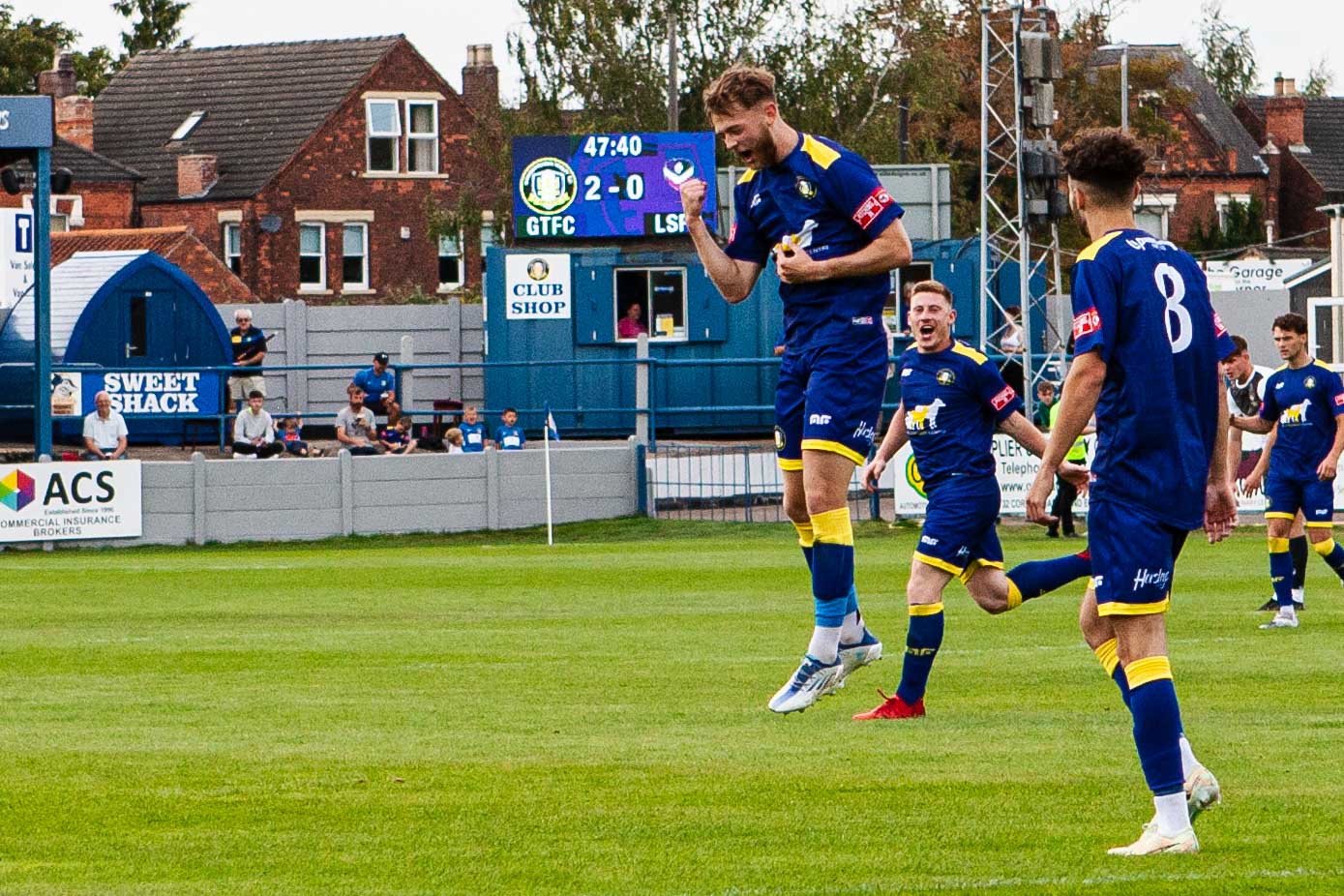 ction. On 26, the number nine did reach a clever ball into the box, Andrew Wright’s ball into the danger-zone took a slight nick off Dyche – and despite an excellent connection – it was blocked by Students’ ‘keeper Smith at point blank range.

George Hornshaw was looking to contribute coming forward, and when his cross was only partially headed away, Liam Waldock fired a controlled effort goal bound, save for the deflection that took it behind for corner. From the set piece, Cann met the first ball, but Donaldson was unable to direct his header on target.

Just as the visitors started to come into the game more as the half wore on.. Loughborough looked good between the two boxes, but it was Gainsborough who took the game by the scruff of the neck - and Trinity did have a second three minutes before the break when a long Matt Yates goal kick, aimed for the impressive Donaldson instead found Rotherham United youngster, Curtis Durose. The box-to-box midfielder running in behind and lifting the ball over the stranded Sam Smith with a sublime finish.

Despite a treble offensive change at the break by visiting boss Jamie Clapham, the home side had the third only three minutes into the second half. Liam Waldock arrived to net his second goal in as many games.

Arriving late, Waldock’s composed finish rounded off a move which had seen Andrew Wright keep the Trinity attack moving. He was able to release West and the left back’s ball into the box was helped on by evergreen Donaldson – and Waldock made no mistake, as he made it two goals in as many games from midfield.

Loughborough saw a lot of the ball in the middle of the park, but rarely threatened the Gainsborough goal. And it was Sam Smith who was called into action next, when a partially cleared corner was pounced on by skipper Wright on the edge of the box. His effort through a crowded area comfortable for the ‘keeper with Donaldson primed for any fumble. Dyche plucked the ball brilliantly out of the air and beat his man for pace down the left. He picked out Donaldson, who Di Canio-esq volleyed narrowly wide of the upright. Trinity were fashioning a good number of chances, but not adding to their tally On as a substitute, Cursons began to cause problems as he looked to link up with Waldock. The later winning a corner, which Cann fired over from eighteen yards, as the Blues had to settle for three.

The Scholars didn’t give up though – and had the reward their endeavours between both boxes deserved, with the final kick of the game, Yates & Cann weren’t on the same wavelength and Anthony Lynn reduced the arrears, slotting home into the unguarded goal. A blemish on the record for Bishop and Parkinson's men, but the first Qualifying Round safely navigated. £2,250 in the pot - and into Monday's draw. Saturday's work, complete. And with Warrington and Morpeth playing out a 2-2 draw, the Holy Blues have a seven day rest, ahead of the trip to Marine, who do have a game on Tuesday night away at Bamber Bridge.