Gainsborough Trinity needed extra time to overcome a potential banana skin, against a steely Long Eaton United, setting up a mouth-watering local derby with Worksop Town on Saturday 1st October, in the third qualifying round of the world famous Emirates FA Cup. Clayton Donaldson opened and closed the scoring with his second and third goals for the Holy Blues, sandwiching two worldies from Liam Waldock and Curtis Durose to see off the well-drilled visitors, who continued to ask questions deep into extra time.

Both sides made a trio of changes to personnel, from Saturday's 1-1 draw. Neal Bishop, without the absent Damon Parkinson assumed full responsibility, as his place in the back line was taken by Isaac Rice with Hayden Cann still struggling. Ethan Bojang started in midfield, while Tom Cursons and Iren Wilson started in place of Jack Dyche and Curtis Durose.

Trinity started the game brighter, with Liam Waldock having the first sighter of goal, but his well his strike was blocked by a visiting defender, but the opening half wasn’t to be all one way traffic, as Jamie Walker continued on in an impressive vein. He delivered a wicked ball across the face of Matt Yates’ goal, but neither Kameron Campbell, or Alex Marshall could find the finishing touches. Tom Cursons created an opening of his own, but he couldn’t get enough purchase on his effort, with Sam Wilson on hand to block. Clayton Donaldson did well down the right, as he teased a ball across the face of the six yard box, this time Iren Wilson couldn’t find the finishing touch.

Andrew Wright’s deep corner to the back post found it’s way to Dylan Cogill, but his header from close range crashed off the frame of the goal, with Wilson beaten. Five minutes from half time Andrew Wright won possession back following a mis-placed pass by the returning Reco Fyfe. He slipped in veteran Donaldson - and he c 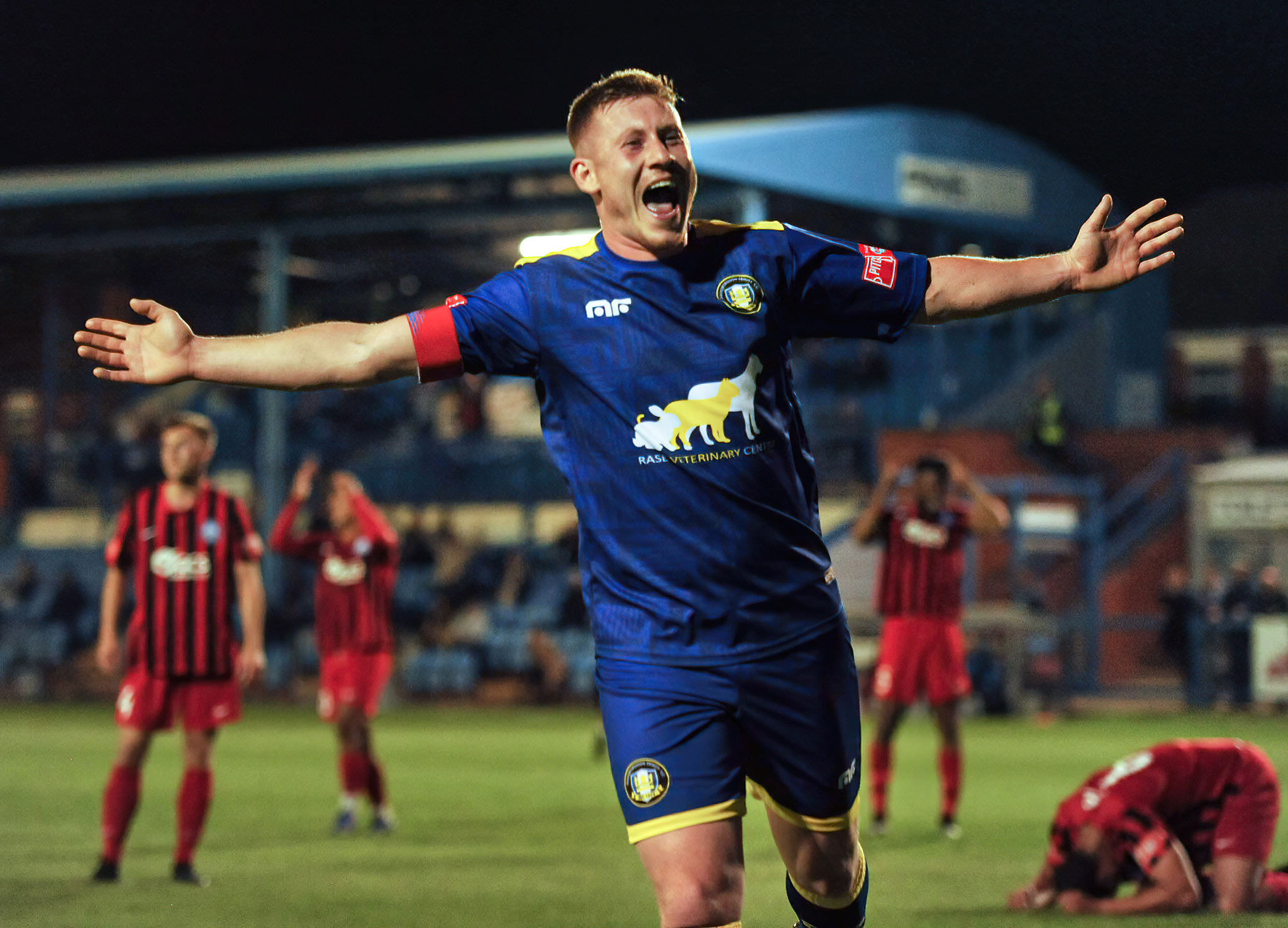 hopped onto his right to curl a sublime finish (with the aid of a slight deflection) beyond Wilson, settling home nerves in the process..

The visitors came out of the traps quickly at the start of the second half, and former Derby County youngster Jack Rogers almost immediately had United back on level terms. Fyfe’s ball found the number eleven and as he came in from the left, he used the Trinity defender for cover, bending a low finish around the Gainsborough man and striking the foot of the post. A let off for Neal Bishop’s men..

In a reversal of roles, Long Eaton grew into the game as time wore on, asking more of the Holy Blues - and eventually had reward for their persistence. A treble change on the hour mark saw Deakin shake things up, introducing former fan favourite Rod Orlando-Young into the fray as he added pace and directness to his side. And it was none other than Orlando-Young. Two of the three visiting substitutions (made on the hour) combined to send the game into overtime.

Micah Jebbison did brilliantly down the left to twist and turn before digging out a cross to the far post that was met by a giant Orlando-Young leap. His header back across goal and kissing the inside of the post on its' way past Matt Yates. The visitors were giving their all, looking to win the tie in normal time – but that was to be their undoing. Trinity saw the game through to extra time – and it was there that Bishop’s men regained the ascendancy.

Four minutes before half time in extra time, Liam Waldock lit up proceedings as he bent home a tremendous effort to notch his fourth of the campaign Durose’s simple ball, finding Waldock in space. A goal worthy of winning any game! Struck with purpose at the Stuart Horsley end, Wilson had no chance. And Trinity had their noses back in front. On the stroke of half time, Kam Campbell saw his second yellow and subsequent red following a late tackle on Hornshaw. That made things even harder for the visitors, but still they displayed heart and fight typified by their boss Deakin, kicking every ball on the touchline and squeezing every ounce of effort from his troops.

As the ten men started to falter, Jack Dyche invited Durose forward and the Rotherham youngster gave Trinity a two-goal cushion as the opportunity opened up for him to come in from the right. Switching onto his left, he provided another tidy finish to seemingly put the game beyond doubt.

There was still time for another response from the visitors, when Orlando-Young's wicked left wing cross was diverted beyond Yates meaning a nervy final couple of minutes. But Donaldson capped off the scoring with a close range finish from Bojang's cut back to put the game, once and for all, beyond doubt. Setting up the home tie with Worksop Town, on October 1st….