Gainsborough Trinity dominated from first minute to last as a Clayton Donaldson masterclass was too much for visitors Stalybridge Celtic. The Holy Blues recording their first league victory at Northolme this season to move up to ninth in the Pitching In Northern Premier League table, ahead of the visit of Guiseley on Tuesday evening. In the continued absence of Damon Parkinson, through ill health, Neal Bishop again took sole charge of team affairs. And he made four changes that yielded four goals and three points for the dominant Blues. Skipper Andrew Wright, Ethan Bojang, Iren Wilson and Tom Cursons all had to settle for places on the bench as Hayden Cann returned from injury.

Scunthorpe United loan man Finlay Shrimpton came in for his debut, while Jack Dyche and Curtis Durose were also restored to the starting line up. It took only a few minutes for Curtis Durose to be involved in the action, the on loan Rotherham United man tested Greg Hall with an audacious effort with the outside of his right boot, only to see the former Nantwich Town and Witton Albion stopper equal to the effort.

On the quarter hour though, the Holy Blues had the breakthrough. Isaac Rice split open the visiting defence, finding Durose on the right. His first time ball into the box was met by Donaldson. And he only needed one touch to beat Hall from close range and settle any nerves the home side may have had. The goal saw confidence coarse through the Trinity side - and with Liam Waldock and Jack Dyche looking to combine on the edge of the box, Dyche tried to return the ball to the former Sheffield Wednesday midfielder, but it was Dyche who was given the opportunity to net his fourth of the campaign. The ball falling kindly for Dyche to smash past Hall and double Gainsborough’s advantage just before the half hour.

When Donaldson came short to hold up the ball and Cann stepped out from the back, his ball forward put pressure on the visitor's backline. The ball dropped kindly for Dyche to shoot. The forward in field, from 25 yards testing Hall, who turned h 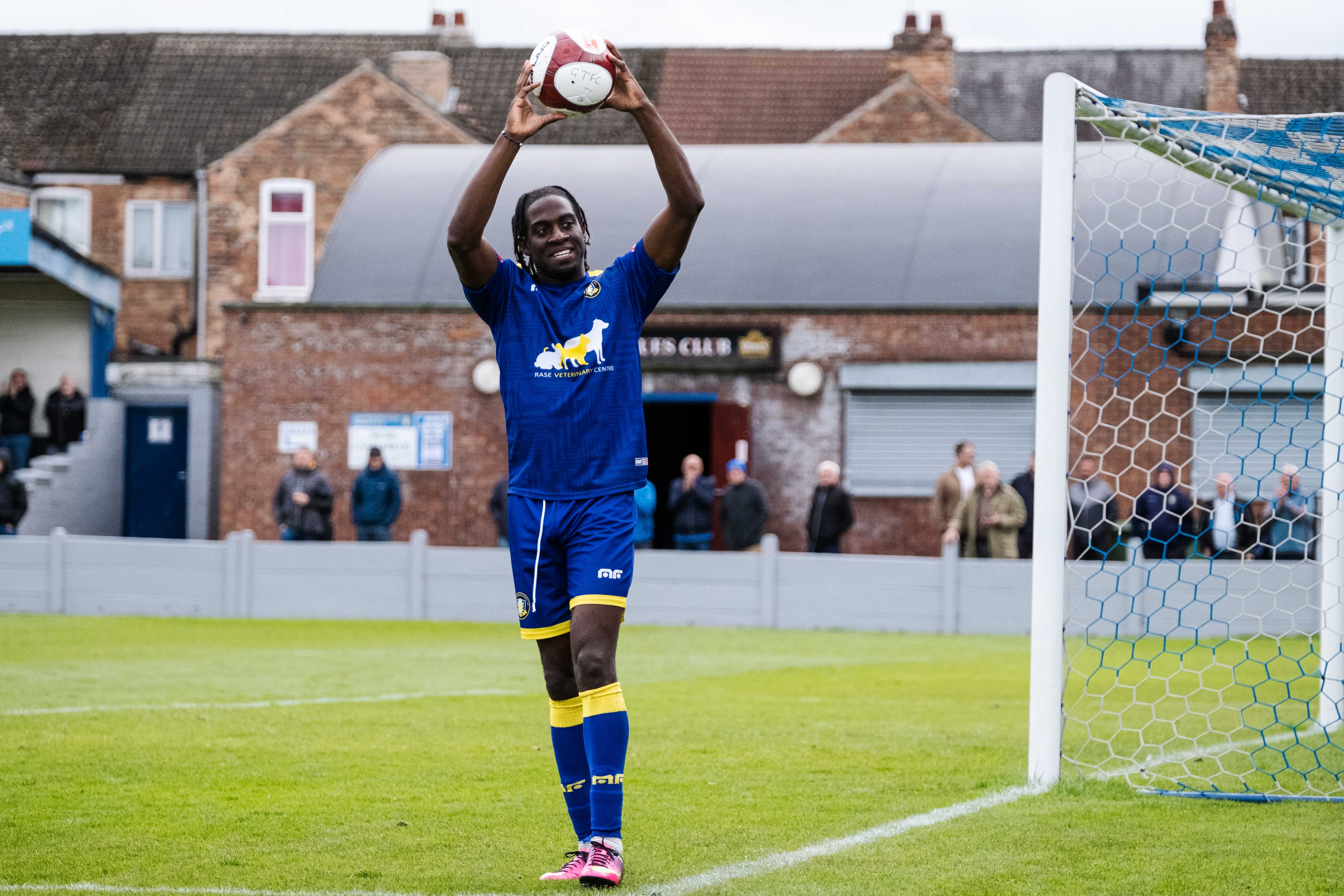 is effort behind for a corner.

The Holy Blues were looking dangerous every time they went forward. Rampant, Trinity added a third, when shortly after, Donaldson had his second of the game. Capitalising on a horrendous error to go one on one with Hall, the former Sheffield United front man raced on to the back pass and rounded Hall. Scoring his second of the afternoon and fourth in two games. Three up at the break and Bishop's boys were in control.

Two minutes into the second half, things went from bad to worse for Chris Wilcock’s Stalybridge side, when Godwin Abadaki saw his second yellow and subsequent red after Durose had got goal side of his man. Durose firing the free kick into the wall.

Good interplay down the right saw Durose and Waldock combine well, before the latter shot on target, but his scuffed effort was comfortable for Hall.

Introduced to the fray, Tom Cursons looked lively as he looked to occupy the Stalybridge back line. Cutting in from the left he saw an effort charged down. Donaldson then completed the scoring. The infectious Waldock won the ball back and threaded the ball through for the veteran forward. His first touch instantly giving him time and space to draw Hall and roll the ball home.

Donaldson left the field to a standing ovation shortly after his third, and Trinity saw the game out comfortably, although Dylan Cogill had to be alert, clearing off the line from Cameron Darkwah to preserve the home side’s clean sheet. Following more good work from Durose down the right, ex Lincoln City man Tom Miller almost turned past his own goalkeeper at the near post. Superb defending in the end, but with the day the visitors were having, it so easily could have been five for Trinity.

With momentum building, the Holy Blues are in action at the Dave Longstaff Martin and Co Arena on Tuesday evening in another league game. This time facing off against Guiseley in a 7.45pm kick off. We look forward to seeing you there!