The Holy Blues made it a super seven unbeaten with a 1-1 draw with Guiseley at the Dave Longstaff Martin and Co Arena. Gainsborough signing off from league action for a fortnight, to concentrate attentions on FA Cup and FA Trophy in knockout football action Blues' boss Neal Bishop named a completely unchanged sixteen from the side victorious over Stalybridge Celtic - and no one could have any complaints following the manner of the victory last time out. The message and blueprint clear for the players to duplicate.

That said, it was an uncharacteristic mis-judgement from Hayden Cann inside the opening moments that threatened to knock the Holy Blues off their stride before the game had even properly caught hold. Adam Haw firing narrowly wide from twenty yards. Good combination play between Joe West and Jack Dyche created space, but Clayton Donaldson's run was adjudged too soon by the assistant on the Carlilse Street stand side.

Using the full width of the pitch as Trinity swept forward on the front foot. Getting forward from full back George Hornshaw's cross sought Donaldson's near post run, but the Blues had to be content with a corner. And from Durose’s set piece big centre back Dylan Cogill smacked the outside of the same upright he struck last midweek! From Guiseley's first corner, Trinity were untroubled as it flashed into Matt Yates' side netting at the near post.

Finlay Shrimpton continued where he left off on Saturday. Looking to get on the ball and keep the Holy Blues ticking, but also doing a fine job breaking up the opposition play, to protect the back four. Donaldson was in for some rough treatment, but he responded well to it. Taking it in his stride as he continued to show for the ball and link together passages of play. Jameel Ible on a tight rope all evening, but somehow not falling off.

On 29 minutes, Isaac Rice dragged an effort wide after 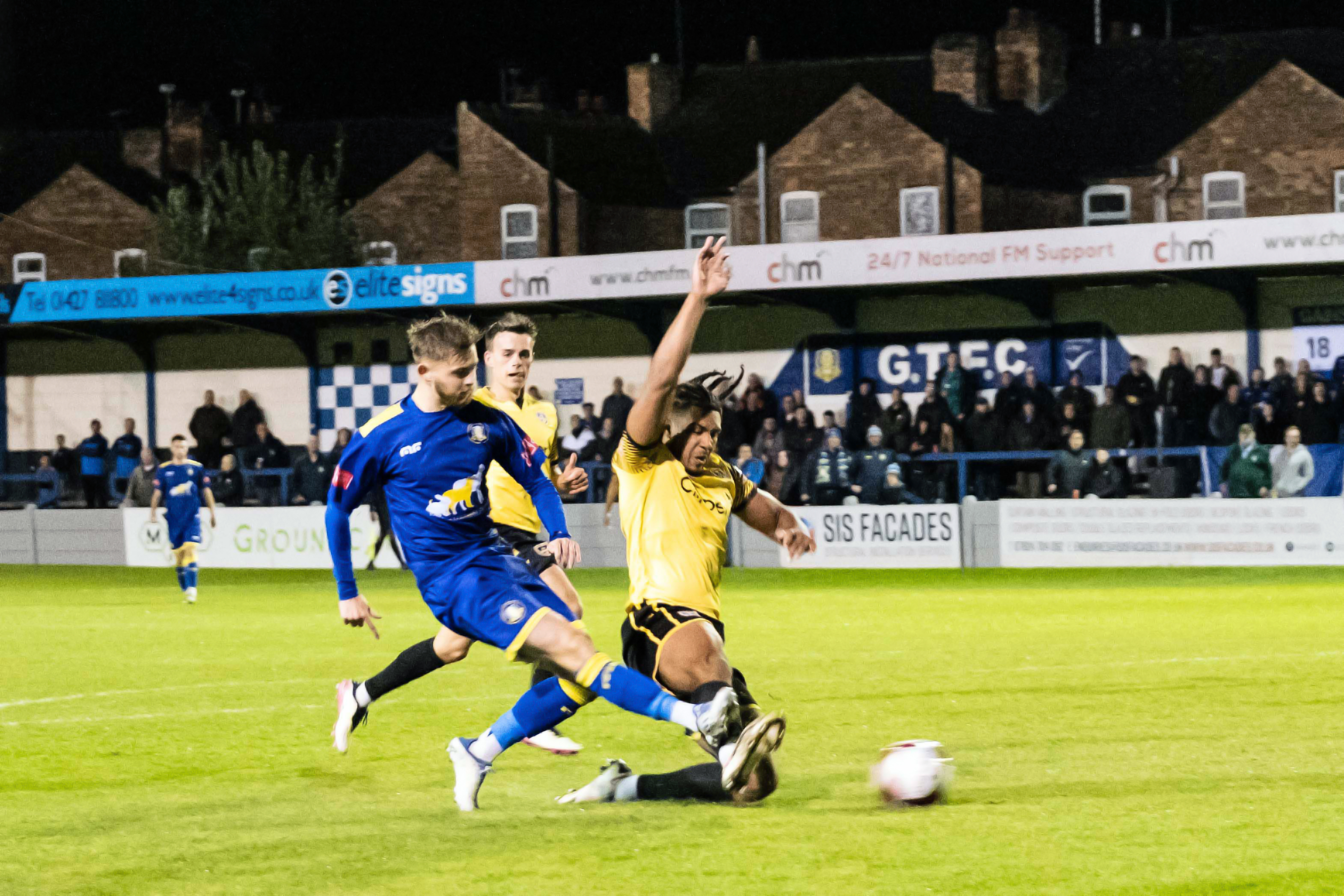 Donaldson was fouled in the build up, the chance to play on not expected - and subsequently not profited upon. At times in the first half Bishop's side played some great one and two touch attacking football up to the final third, unfortunately just lacking the crucial final ball.

Ten minutes before the break, Durose broke the defensive line with the visitors appealing for offside. But with only the goalkeeper to beat, the exciting youngster couldn't find the finish to put Trinity ahead.

The Lions won a corner, and Trinity failed to clear the danger fully. Qasim striking the outside of the post with Yates beaten, living a little bit dangerously, the Blues were soon punished. A breakdown in communication and Guiseley's number seven made Gainsborough pay as he rolled the ball into the unguarded net.

As Trinity looked for an immediate response, Durose got forward, West delivered into the box where Donaldson continued making a nuisance of himself, but ultimately, to no avail.

The half time reset saw Trinity come out more settled. More focussed and determined as they looked to come back from a goal down. And seven minutes into the second half, a thing of beauty was created - and the Holy Blues were back on level terms.

Cann strode purposefully over half way. He found Durose, and while Hornshaw made a superb supporting run on the overlap, the Rotherham loan man cut in from the right, before scooping the ball into the path of the en-rushing Liam Waldock, to net his fifth of the campaign - steering his finish past the despairing dive of Scott, to the delight of the home faithful.

Matt Yates was on hand to make a good save to deny Nicky Walker. Turning his effort behind for a corner, before punching a way the subsequent set piece. Trinity failed to fully clear with the goal-scorer Qasim volleying over the bar Substitute Cursons released the overlapping West, who crossed deep into the box, Durose arriving late, was denied the chance to test Scott as Emery headed behind for a corner. But the ball wouldn't fall for the Holy Blues.

Trinity then defended a Guiseley corner and turned defence to attack as Cursons got free down the right, his reversed ball into Donaldson was rasped goalwards, but always rising. As the veteran front man pulled the trigger, Waldock had again burst from midfield unmarked - but Donaldson's form in front of goal, you couldn't bemoan his attempt. More fine hold up from big Clayton saw him trick his way past two challenges, finding Durose who squared across the most inviting of balls... Fully committed, and at full stretch - Cursons just couldn't make the telling connection.

As the game swung back and forth, Fin Shrimpton picked up a caution as late Guiseley substitute Donald Chimalilo looked to drive the visitors forward. The yellow card virtually the last action for the on loan Iron youngster as he was replaced for the final few minutes. In four minutes of stoppage time, Cursons, Wright and Rice all had efforts blocked as the Holy Blues couldn't find a way to grab a second and all three points, but fighting back from going a goal down, Trinity made it seven games unbeaten, the points shared, and the Holy Blues go again on Saturday having only tasted defeat once in twelve.