Gainsborough Trinity bowed out of the Emirates FA Cup at the Third Qualifying Round stage. Defeated by Worksop Town by a solitary goal to nil, the visiting Tigers performing the perfect smash and grab to secure their place in the Fourth Qualifying Round draw. The Holy Blues made just one change to the starting line up. Club Captain Andrew Wright restored to the starting eleven as Jack Dyche missed out completely through injury.

Both teams ended with ten men, in a tempestuous game that saw few clear-cut chances in front of a bumper crowd at the Dave Longstaff Martin and Co Arena... referee Harry Jones reaching for his pocket inside the opening couple of minutes. Clayton Donaldson was too much for Hamza Bencherif as he darted into the channel between the right sided central defender and right back, only to be hauled down. An early marker - and the visiting skipper on a tight rope.

Unfortunately, Curtis Durose set the tone with a scuffed free-kick into the shins of the assembled Worksop wall - and Trinity couldn't make the Step Four visitors pay further. Donaldson had a sighter of goal, but bent his effort narrowly off target, but the focal point of the Trinity attack was finding himself on the end of some rough treatment, that on another day would have seen a few more decisions given his way. As Hornshaw looked for the striker, Bencherif was in strongly on Clayts as he diverted the ball behind for a corner.

And it was from that Trinity set piece, that saw the only goal of the game... but not for those of a Holy Blue persuasion. From Durose’s right wing corner, the visitors countered. Terry Hawkridge freed Jay Rollins to scamper down the right and deliver a pinpoint cross for Paul Green to power home from close range. Matt Yates in the Gainsborough goal with no chance. 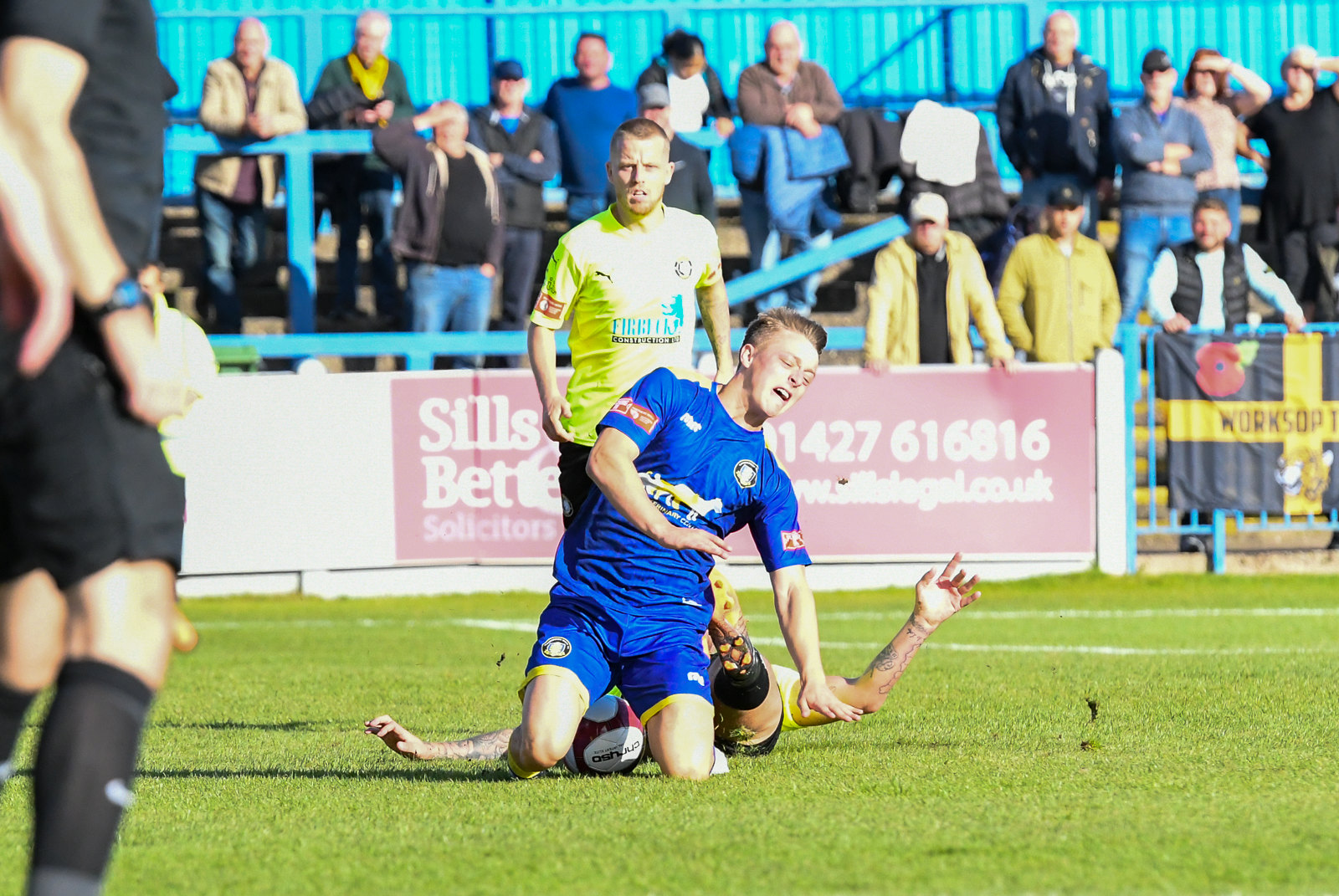 rew Wright was denied an almost instant equaliser by Worksop 'keeper Sebastian Malkowski. The Pole flinging himself to his left as the skipper looked to curl home from the left hand apex of the box.

The Tigers could have doubled their lead ten minutes before half time, but for a fine point blank save by Matt Yates to deny James Hanson. Rollins again providing the service down the Worksop right. Wright then saw an effort deflected wide, before Liam Waldock tried to get away after Bencherif gifted the Blues an opportunity. Degan Atherton recovering well to throw the Trinity man off his stride.

On the stroke of half time, Malkowski did well to deny Donaldson from an acute angle, the experienced forward not able to get a shot away on the follow up.

The Holy Blues came out chasing the game at the start of the second half. Asking one or two questions, Donaldson was occupying the visiting centre backs, when eight minutes into the second period, Worksop were down to ten men. Bencherif was shown his second yellow card, for a carbon copy of his first. Hauling down Donaldson - in a dangerous position Wright's free-kick up and over the wall - but straight at Malkowski.

With the man advantage, the home side huffed and puffed, keeping the ball well at times, the Holy Blues really struggled to penetrate the Tigers' rear-guard. A combination of poor decision making and final ball, too frequently letting the visitors off the hook.

Liam Hughes was lucky not to go into the book when he lunged at Finlay Shrimpton after a skillful turn in his own half set him on his way. Hughes' challenge from behind a caution in many people's book saw him sent on his way after a quick talking to.

You felt that if Gainsborough got the equaliser they would go on to win the game, but that opportunity evaporated with the dismissal of Shrimpton, shown a second yellow card nine minutes from time. With both sides down to ten men, the Tigers saw out the game with Mr Jones a busy man as tempers flared. The visitors killing time where possible and holding the Blues at a distance.

Hughes reacted badly to a Hayden Cann aerial challenge. An attempted headbutt defused by Cann's centre back partner Cogill, who in turn was on the receiving end of a shove or two from Worksop substitute Vaughan Redford. Hughes and Cann going into the book as Worksop navigated five additional minutes with Trinity unable to unlock a stubborn visiting defence and giving away a number of cheap fouls, played into the hands of Worksop - and saw our FA Cup adventure slip from our grasp.

There is little time for Neal Bishop's boys to lick their cup wounds though. Following a week off, Trinity are back in cup action. On Saturday, again at home, the Holy Blues face fellow step three side, Barwell of the Southern Premier League Central division. As the side look to put things right - and bounce back to winning ways - we hope to see you back at the Northolme!