Gainsborough Trinity saw off Warrington Town by two goals to nil at Cantilever Park to secure a first victory over the Yellows in seven attempts. Liam Waldock's six-minute double midway through the first half giving Neal Bishop's Holy Blues a platform to protect - and Trinity's young guns did just that to secure all three points and climb to tenth in the table. Boss Bishop was flying solo as travel chaos prevented Assistant Darryn Stamp and Goalkeeper Coach, Jamie Bradley from linking up with the team, but the players rallied round and put in a shift to be proud of.

He opted to make two changes to the starting eleven that saw off Barwell on Saturday, Harry Lewis made his first start and Finlay Shrimpton returned following his one match ban, replacing Iren Wilson and Andrew Wright. On a tight pitch, the Holy Blues had to defend well - and take their chances when they came along. What followed, was a masterclass in doing just that. The midfield packed with verve and energy regularly saw Fin Shrimpton and Liam Waldock involved, with Waldock driving the midfield on. And with George Hornshaw supporting from full back, the Holy Blues looked a threat coming forwards. Following a foul on Clayton Donaldson, Hayden Cann got himself free round the back, but he returned the ball on the full – perhaps if he had scuffed his effort, it may have fell kindly for an onrushing Trinity shirt.

From an attacking throw in, for the home side, the Holy Blues turned defence to attack in rapid fashion. Shrimpton winning the ball back and unlocking the Warrington defence, the man on loan from Scunthorpe United sliced open the Town defence, releasing Donaldson in the process. Donaldson demonstrated pace and power to get away down the right, before using his experience and composure to pick out Waldock, who swept home to the delight of the Trinity fans in attendance at Cantilever Park.

Warrington responded to going a goal down, but brave, bo 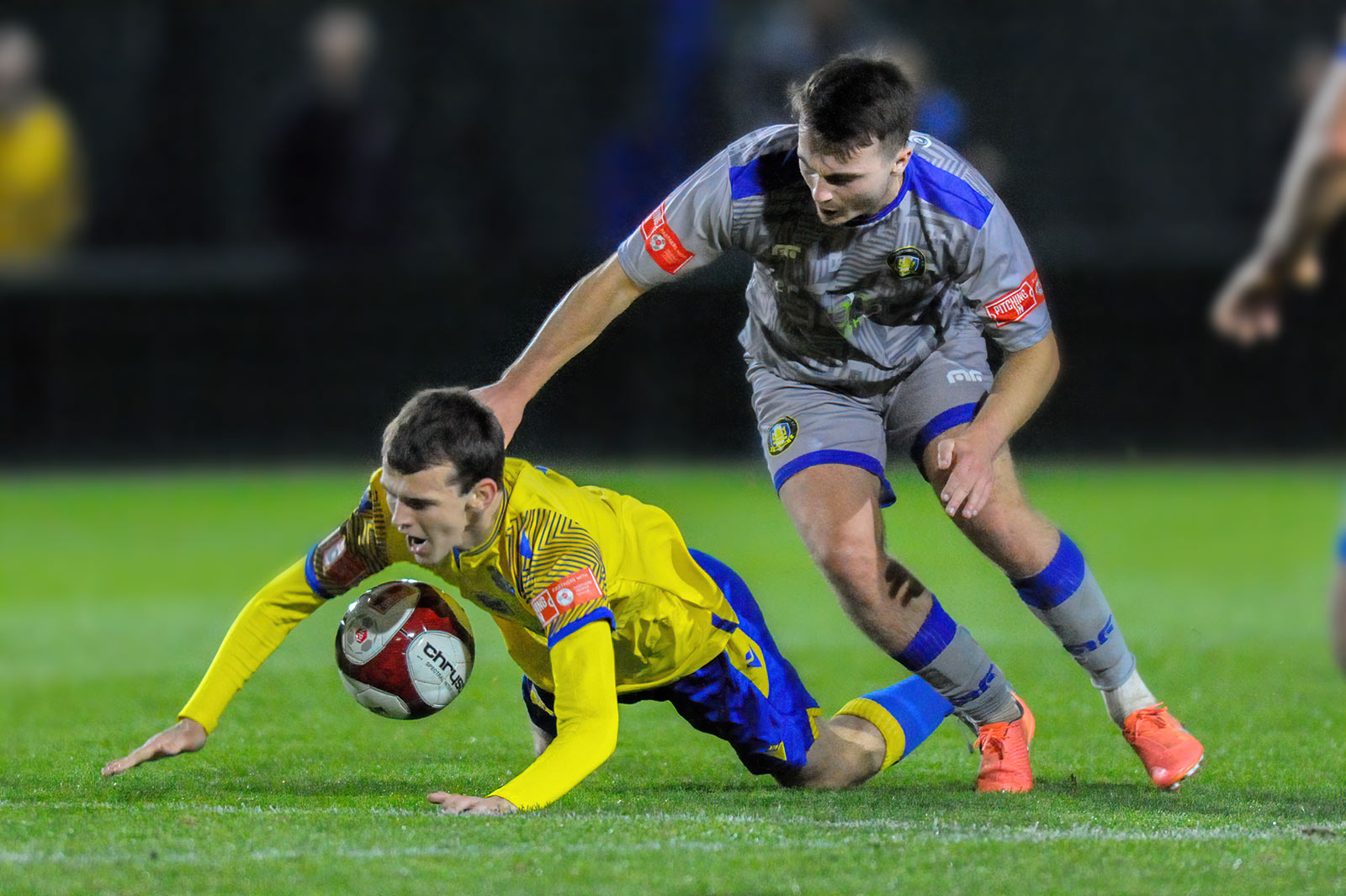 dies on the line defending, saw efforts from McDonald and Duffy blocked before Andy White steered one over from 25 yards as Bishop's Blues erected the barricades.

Declan Walker was shown a yellow. A strong 50/50 was contested with Jack Dyche in the Trinity half, but the Yellows' number seven’s follow through was seen to be excessive, and Mr Beckett duly booked the Warrington man for his troubles. From the resultant free-kick Trinity changed the angle before going long. Town failed to clear their lines, under the high press. Dyche and Donaldson combining to free Waldock in the box to score a neat, placed finish inside Tony Thompson's right hand post. Doubling the Trinity lead (and Waldock netting his third goal in 28 minutes across the previous two games).

Ten minutes before the break, the Holy Blues could have had a third, but Thompson made a smart stop as Shrimpton burst from midfield. Jack Dyche cut in from the right, Donaldson dragged his man away – and the burst through the middle – and quality of Dyche’s ball wasn’t rewarded with the net bulging - this time.

Cogill and Cann continued to dominate at the back, providing a solid base from which the Blues could play. A couple of times balls were floated into dangerous area by White and Williams, but the threat was minimalised by Bishop’s boys. Connor Woods, a recent addition to the hosts ranks, from Southport enjoying little change out of the Gainsborough back line.

And there was still time for Lewis to raid down the left before half time, the young full back made good progress down the left, but from the edge of the box, didn’t have the finish to trouble Thompson. On the stroke of half time, from Curtis Durose’s left wing corner, Cann did find the target, but his attempt from twelve yards was comfortable for the home keeper.

After the break, Warrington came out chasing the game, looking for an early goal to get themselves back in the game. Wave after wave of yellow-shirted attacks swarmed forward in search of a goal, but the Holy Blues stood firm, picking their moment to counter attack at pace.

Trinity were being forced to defend, but were doing so resolutely. A free-kick was crashed into the Gainsborough wall, before Hornshaw cleared and Trinity turned defence to attack Donaldson’S low ball across the face of goal, with Waldock denied his hat-trick as his effort was charged down and deflected away.

Harry Lewis then took up the fight with a marauding run down the left hand side, his positivity drawing the foul, as he cut in from the flank, the referee awarding the free-kick in Gainsborough’s favour and quickly defusing the situation. Durose tried his luck from 25 yards. His free kick up and over the wall, but he couldn’t get it down quickly enough to worry Thompson. And there would be no repeat of his Barwell heroics.

Connor Woods got on the end of a Sean Williams’ freekick from deep, but he couldn’t direct his header on target. The Holy Blues defending well. A combination of Yates and Lewis blocked the next attempt as White and Eddie Clarke linked up down the Gainsborough right. Yates was again in the thick of the action when he was quickly out to spread himself at the feet of Clarke.

Trinity chose their moments to attack – and did so with vigour. Lewis’ centre across the face of goal just evading Donaldson. Having to defend for increasing periods of time, Neal Bishop changed the shape of the side, the tweaked formation, as he replaced Dyche with Club Captain Andrew Wright paid dividends as it further stifled the home side’s advances. The pressing; appeals for a penalty, and constant knocking on the door, yielded little joy for the hosts – and in truth, it was the Blues, in grey – that could have further added to the score line. Waldock broke away down the right-hand side and squared to Donaldson. Rolling his man, and without a second glance, arrowed an effort goalward, forcing Thompson into action.

As the game slipped away from the hosts, frustration started to creep in, but the Holy Blues rose above it, showing a level of maturity Bishop could only be proud of. With Matt Yates behind his defence on the rare occasion they were breached, secure in what he needed to do, recording his fifth clean sheet of the campaign. The Holy Blues now return to the Dave Longstaff Martin and Co Arena on Saturday, looking to build on the three points safely taken back to Lincolnshire on Tuesday night, when Atherton Collieries visit the Northolme. Kick off at 3pm.