Gainsborough Trinity made it six games unbeaten in the league with a 2-2 draw at home to Atherton Collieries, as it was the spoils shared at the Dave Longstaff Martin and Co Arena. Neal Bishop’s men losing, levelling and leading before ultimately having to settle for a point against a strong and robust side, who came with a plan to stifle the Blues, whilst looking dangerous at times themselves.

Following the Blues’ midweek win over Warrington Town, the side virtually picked itself, as Bishop opted to make just the one change to the sixteen. Joseph West missing out on the sixteen, as Prosper Keto was named on the bench for the first time this season. A welcome return to the fold for the flying full back. Trinity really struggled to get a foot hold in the game, particularly in the opening exchanges.

Two pivotal moments within sixty seconds set the tone for Trinity’s frustrating afternoon. A rare piece of quality in the opening exchanges saw Clayton Donaldson and Liam Waldock combine, as they have so often this season. Waldock’s run, was tracked, and as he looked to slip the ball to the goalkeeper’s right, the ball fell agonisingly the wrong side of the ‘keepers’ upright. Switching off, so soon after almost going ahead, Scott Bakkor rose unmarked, to send his header back across goal from Clive Smith’s centre. Opening the scoring and punishing the Holy Blues in the worst possible way. Scoring the goal gave the Colls something to hold on to, and that’s just what they would do.

The goal brought about a change in shape as Isaac Rice slotted into a back three, only for Trinity to then be hindered by injuries to Rice and his replacement, player/boss Neal Bishop. All before half time. Despite the adversity, the youthful Blues continued to b 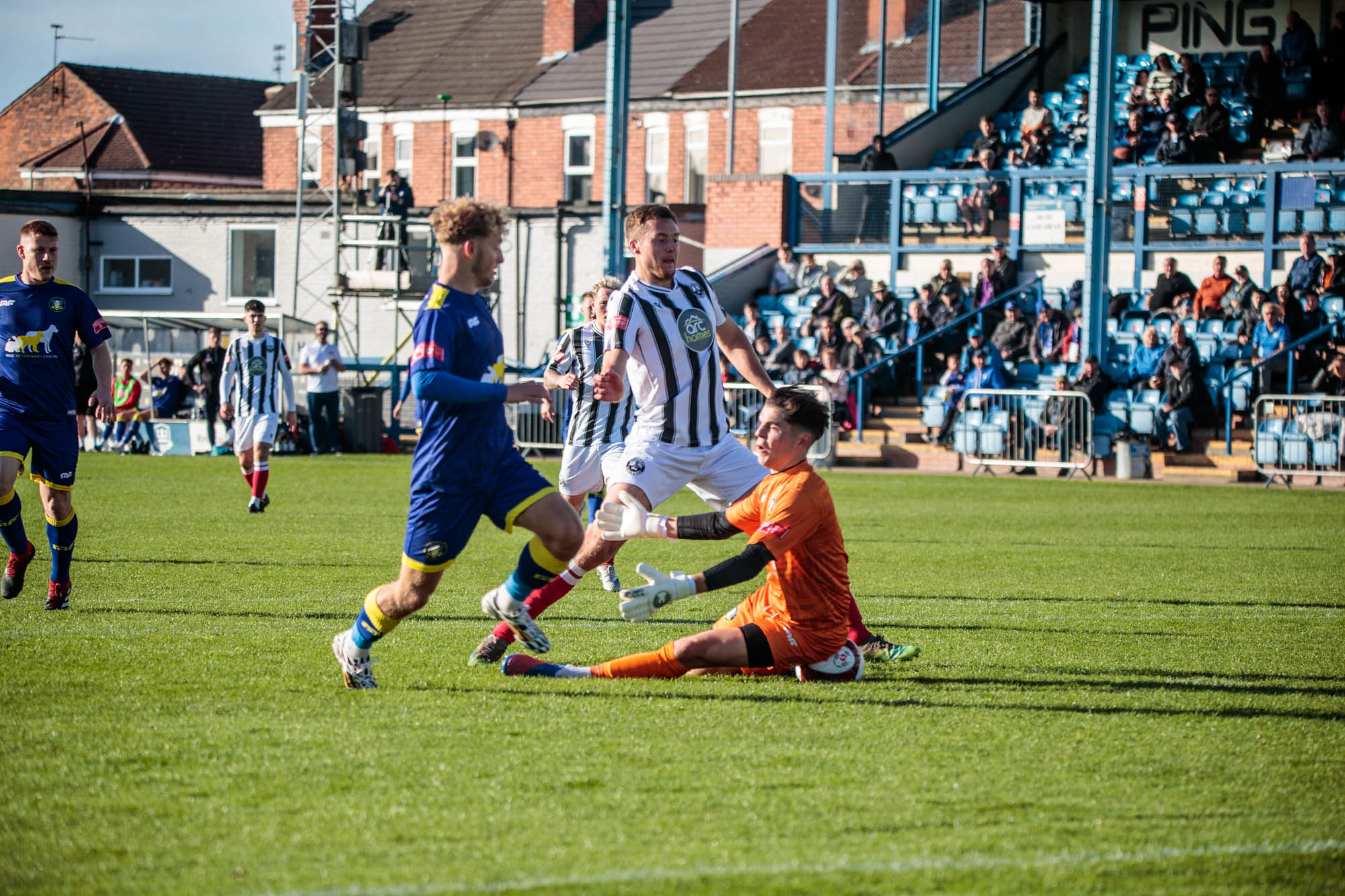 attle, with young full back Harry Lewis on his full home debut looking a threat down the left. A neat interchange with Liam Waldock saw the youngster upended in the box. Clayton Donaldson stepping up to score from the spot, his eighth in all competitions for the Holy Blues.

Having worked so hard to get back on terms five minutes before the break, Marcus Cuasni could have restored the lead soon after, but he was denied by a brilliant save from Matt Yates, spreading himself at the feet of the forward. Bravery from the Trinity number one, to ensure the scores were level at the break.

Donaldson could then have had his second when a neat one-two with Curtis Durose saw the veteran front man through with the ‘keeper to beat, but Nico DeFreitis-Hansen stood up well. And wasn’t to be beaten by the Gainsborough man for a second time in the first half.

Three minutes into the second half, and Trinity did have the lead, and Donaldson his second of the game. Coming out for the second half, Trinity looked to get on the front foot and take the game to the visitors. Durose’s corner was met by Donaldson ahead of the near post and his glancing header kissed the far post on it’s way into the back of the net.

Not wanting to be out of the game for long, the visitors responded and Yates was then twice quickly called into action, first to deny tormentor in chief Bakkor, firmly pushing away his outside of the right foot shot, before recovering well to divert Kershaw’s follow up effort, with his trailing foot, diverting the ball behind for a corner.

Jack Dyche squandered an excellent opportunity when he was gifted possession on the edge of the Colls box. But the forward was unable to add to his tally for the season, as his attempt flew narrowly past the angle of post and bar!

Trinity were then made to pay for not adding to their tally, when a three man Atherton move down the Colls’ right, saw Clive Smith’s low ball driven across goal – and converted by Ethan Kershaw to draw the visitors level. Gainsborough proceeded to huff and puff in the final twenty minutes of the game. Holding out defensively. But struggling to exert any real pressure on an organised Atherton back line.

Even the introduction of Iren Wilson from the bench, failed to ignite the flame – and Trinity had to settle with a share of the spoils for the fourth time in six home games. Attention for Bishop’s boys turns to Tuesday evening and the trip to the east coast where the Blues make the trip to Marske, in the Pitching In Northern Premier League