Gainsborough Trinity Football Club was formed in 1873 as Trinity Recreationists, set up by the vicar of the Holy Trinity Church for young parishioners. In 1889 they became members of the Midland Counties League, losing their first match 1-2 to Lincoln City and going on to finish 7th out of eleven clubs. The club quickly became well known, and won their first Midland League championship in 1890/91 and after finishing runners-up the following season were elected to the Football League Second Division. Find out more about our club and history below.

Gainsborough Trinity's first match was against Newton Heath, who went bankrupt ten years later before reforming as Manchester United. Trinity held on to their place in Division Two but based in an area with a small population it was always a struggle and the club returned to the Midland League in 1912. Here they were to settle and earn more success, winning the championship in 1927/28, 1948/49 and 1966/67, also finishing in second place on two occasions.

In 1960/61 the league was suspended for one season and Trinity competed in the Central Alliance. On returning to the Midland League the club remained there until becoming founder members of the Northern Premier League in 1969. Gainsborough have never won the NPL although the club twice finished in 4th place and have taken league cup honours on two occasions along with the Chairman’s Charity Shield. Trinity was the longest-serving member of the NPL, ending a 36-year stay after finishing tenth in the Premier Division to earn a place in the extended Conference Nationwide North for 2004/05. 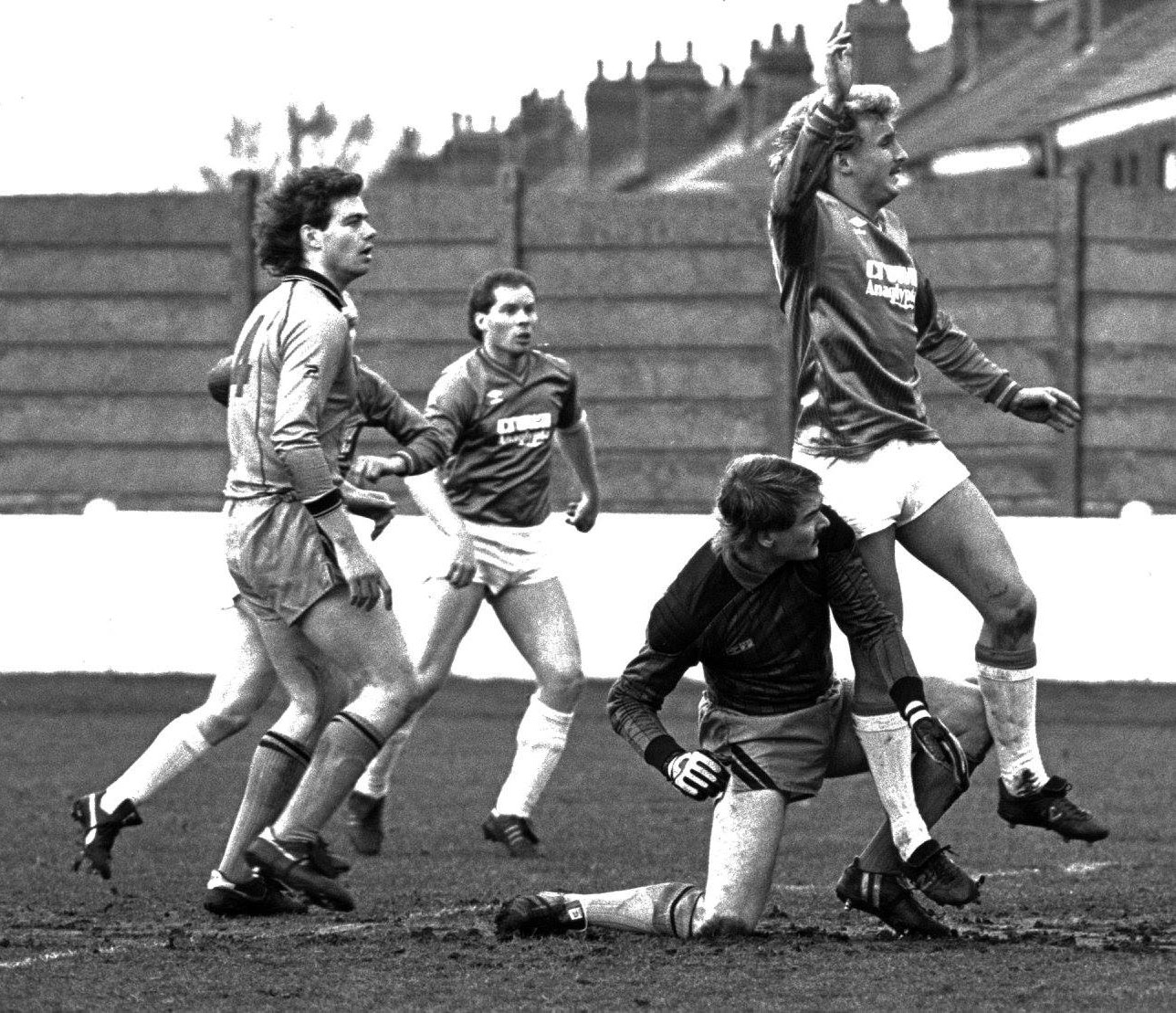 Trinity has long been noted for finding players who have gone on to play in the Football League and the man who was to become their Honorary Manager for over 30 years, Charles Caldicott, arranged the transfers to League clubs of 19 players in the 1930’s and 40’s. Several former Trinity stars went on to play for England; goalkeeper Ronnie Sewell, who also played for Burnley, Jackie Morton who was sold to West Ham United and left winger Fred Spicksley who went to Sheffield Wednesday and played seven times for his country, twice scoring hat tricks against Scotland.

Trinity also has a proud record in the FA Cup, and between 1927 and 1939 established a non-league record by appearing eight times in the Second Round Proper. In the season 2006 - 2007 the club reached the First Round Proper for the 36th time in their history before losing at home to Hartlepool. As a Midland League side they have recorded five victories against Football League opposition, beating Crewe twice in 1928 and 1931, Port Vale in 1937 and Gateshead the following year. The first competition after the Second World War saw most rounds played over two legs, and Trinity recorded a First Round aggregate victory over Mansfield Town.

Trinity has always been a well-run club with a dedicated team of directors who kept the club solvent and, for their size, relatively successful. However, in the spring of 2009 there was a major change in the management of Gainsborough Trinity when Peter Swan, a businessman new to town, bought out his fellow directors and took overall charge of the club. His ambition for Gainsborough and for Trinity was high and fans soon noticed this with the arrival of Luke Beckett; Huddersfield’s Town top scorer who also quickly became Trinity’s top scorer. The pace of major signings continued many with recent Football League/Conference experience.

At the beginning of the next season, it would have been fair to say that there was a real bout of optimism in the town and amongst Trinity supporters. However after very few games in which the lack of success was noticeable, especially at home, the new owner dispensed with the services of the then manager, Steve Charles, and his coaching staff and appointed the very experienced manager, Brian Little, in his place. He brought with him a wide and successful experience as manager; his previous clubs including Aston Villa, Leicester and Hull and it was hoped he would bring the same success to Gainsborough Trinity. As the season progressed it quickly became clear 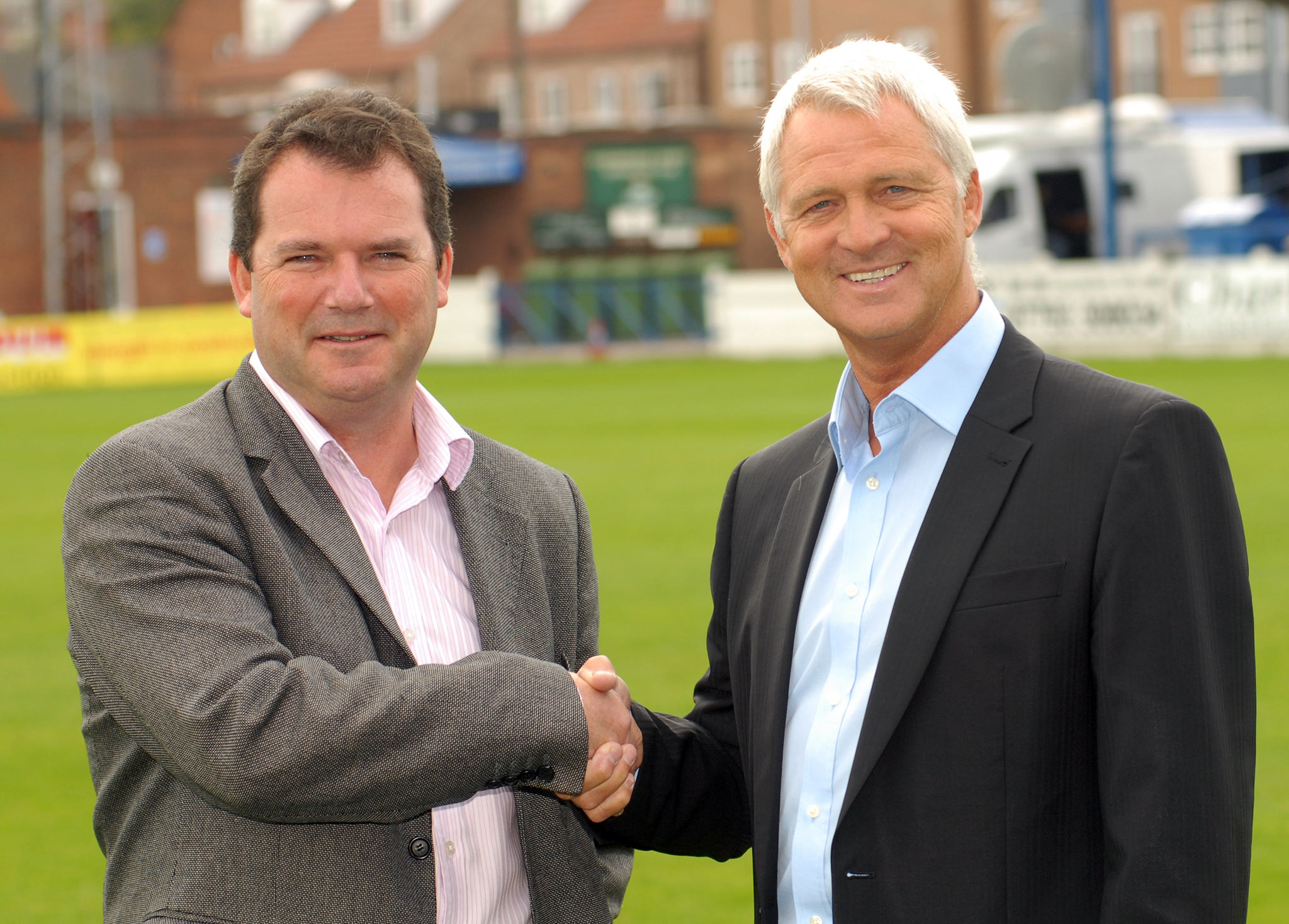 that it was a false dawn - results were not going well for the Blues, this despite the Chairman’s continued investment in experienced players and the past success of the Manager. At the end of the season Trinity narrowly escaped relegation and the optimism at the start of the season had faded into disappointment with results and performances.

This disappointment continued into the next season and it was not long before the manager’s services were dispensed with and his deputy Steve Housham appointed to the post. Steve was known through the respect he had earned playing for Scunthorpe and through bringing success as manager at Brigg Town. The Steve Housham era as manager, together with the investments of the Chairman, began to bear fruit and success at last arrived. In 2011/12 the club finished fourth in the Conference North, qualifying for the promotion play-offs. However, after beating Halifax Town in the semi-finals, Trinity lost the final 1-0 to Nuneaton Town in front of a Northolme packed to capacity.

Success continued the following season (2012/13) as Trinity reached the semi-finals of the FA Trophy for the first time, losing to eventual winners Wrexham. The fact that the away game was televised was a first for the club, though those with limited technical skills found they had to cope with a commentary in Welsh! However, the combination of money and Steve Housham’s undoubted skill at management was not to last. At the end of this season, major change was to come again as the Chairman took his money and moved to Scunthorpe United. Despite the Chair fulfilling his promise of not leaving the club in debt, he did leave a club with the turmoil of finding new directors, new investment and new players on a vastly reduced budget.

It was at this time, the beginning of 2013/14, that the spirit of Gainsborough came to the fore and local businessmen, many relatively young, volunteered to take over the helm. It was a very challenging time, but the work of the new team of directors, together with the skills of Steve Housham in choosing players, many on loan, ensured that this season of transition did not end in relegation and the town breathed a sigh of relief.

Trinity’s Northolme ground has been a home of sport for nearly 150 years, beginning life as a cricket ground, later sharing it with Trinity before it became owned by the Trinity Supporters Club. The record attendance for a football match was recorded in the Midland League during the 1940’s when 9760 witnessed a game against near neighbours Scunthorpe United. However, in 2009 the arrival of Peter Swann, the ambitious Chairman, nearly brought an end to the Northolme as Trinity’s home as he put forward a planning application to create a new sports complex in association with a local school to provide a new ground, improved parking, a social club as well as multi-weather training pitches for use by the club, the school and other local sports clubs. This proposal split the town and the fans but when the initial application was turned down, the Chairman decided to move on and the Northolme was saved from the indignity of being turned into a supermarket! 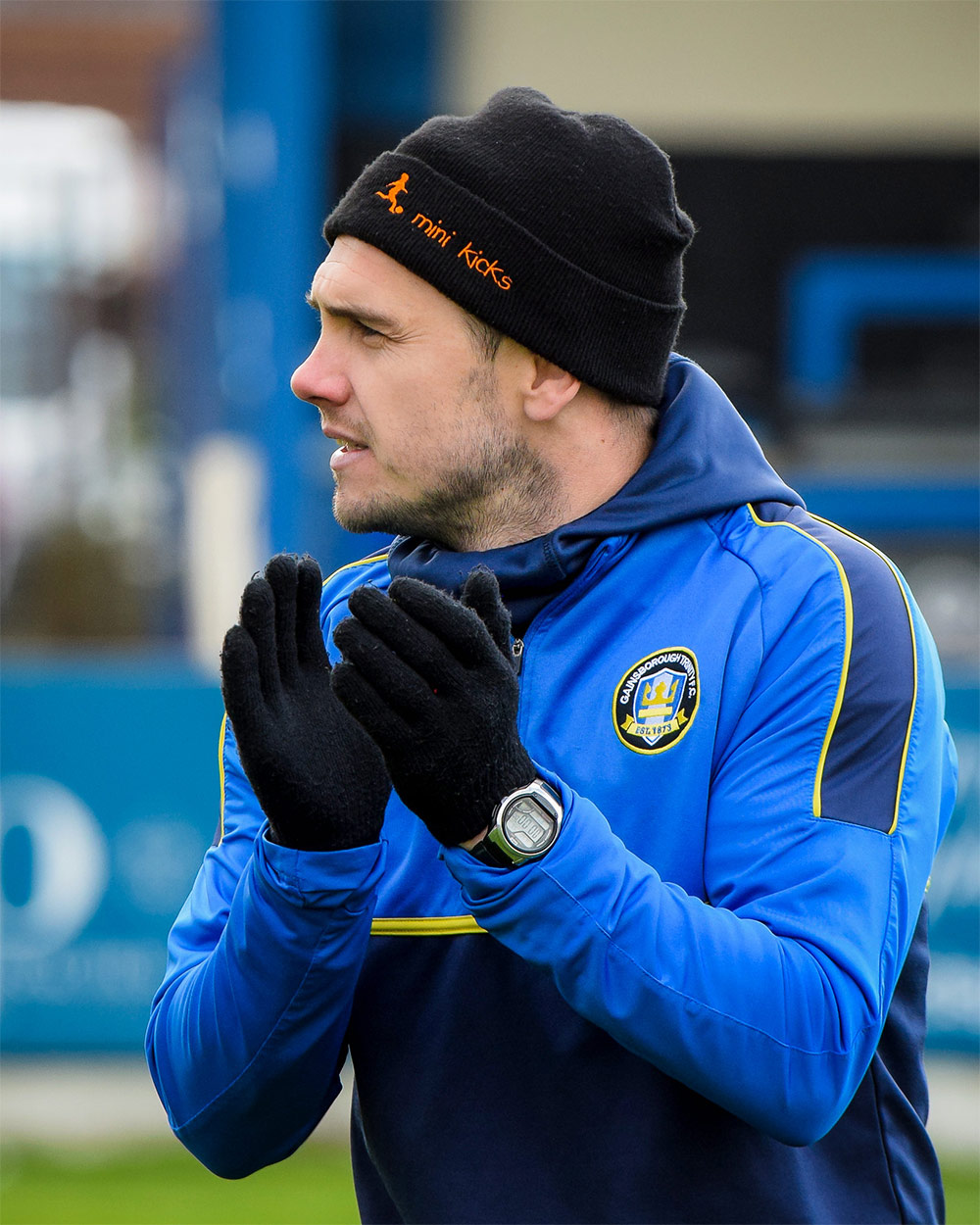 Richard Kane took over as Chairman of the club in January 2014 and quickly set about bringing the club back to the community. A local businessman Kane immediately set about cutting the cloth accordingly, as the sife fought to remain in the second tier of non-league football. Steve Housham and Darryn Stamp were the men in charge when Kane took the helm. in total managing the club for five years. Despite a good FA Cup run that saw Trinity beat neigbours Boston United, lower tier Droylsden in a seven goal thriller and Wrexham at the Racecourse Ground, before a narrow defeat to Shrewsbury Town.

Club legend Dominic Roma took over in the February of 2015, on an interim basis, with the side sliding towards relegation. He oversaw the side's safety and was subsequently named permanent manager, appointing Martin Foster as his assistant in the summer. A shift towards a more professional approach and a younger side started brightly, but with a post Christmas slide, Roma stood down. Dave Frecklington was next to be appointed as manager, making it three managers in as many years for chairman Richard Kane. Frecklington, who had good success at a lower level with Spalding & brought vastly experienced Terry Fleming as his assistant. Frecks secured the club's National League North status by default, despite losing 5-1 at FC United of Manchester on the final day, Worcester losing to Fylde, on an afternoon of rollercoaster emotions left Trinity to fight another day.

An up and down opening half to the season saw the Holy Blues reach the first round of the FA Cup, beating Champions elect, Harrogate en-route, but a chasenting 0-6 reverse at the Martin & Co Arena literally knocked the Blues for six. With the month of February once again approaching and the Holy Blues struggling for form, a turgid away record that included 3-0 4-0 and 5-0 defeats to Leamington Blyth & Bradford Park Avenue, Lee Sinnott and John Reed were brought in to stop the rot. Ultimately, the experienced duo just came up short, despite Ashley Worsfold being in good form in front of goal, yet Sinnott & Reed were given the summer to rebuild in attempt to bounce straight back having lost the unique record of not having been promoted or relegated in 144 years.

A promising start to the Evo-Stik Northern Premier campaign harboured much hope, a resounding 8-2 victory over Chasetown in the FA Cup, but with the play-off dream slipping away with heavy home defeats to Warrington & Farsley, the managerial pack was shuffled again. Club captain, Liam King took the reins alongside experienced forward Ross Hannah, improved results and performances happened immediately, but an unforseen set of circumstances happened as North Ferriby folded, their record expunged and Trinity's six points lost ultimately cost the Blues the final play-off spot. With the core of the squad retained and key areas strengthened, hopes are high for a successful 2019/20 season. We hope you can join us along this next stage of the journey.