It’s third versus first in the early season Pitching In Northern Premier League table’s game of the day. Kicking off at 15:00 at the Dave Longstaff Martin and Co Arena, the Holy Blues welcome Stafford Rangers for our third game in seven days to open the 2022/23 campaign. The age old adage of the games come thick and fast, are never truer than the opening six weeks of the season, as all teams are faced with a hectic Saturday, Tuesday fixture schedule, that sees Trinity face South Shields away on Tuesday night, followed by another home game next Saturday, when Lancaster City are the visitors.

While Trinity and Hyde played out a 1-1 draw in midweek, Stafford made it six points from six, away at Atherton Collieries. All the goals came in a frantic ten-minute first half spell at the Skuna Stadium. Adam Livingstone put Rangers 0-1 up, only to be pegged back two minutes later by Danny Lafferty’s strike. Jack Baxter restoring Boro’s advantage just before the half hour mark, to complete the scoring and earn Stafford their second maximum of the season, following on from their topsy-turvy opening day win at Marston Road, over Bamber Bridge. Having initially fallen behind in the eighth minute, Stafford turned the game on its’ head, opening up a three goal margin, only to see this reduced a minute from time as Brig made it 4-2.

Looking ahead to the game against Stafford, Neal Bishop, with a wry smile, commented, "Onto the second home game in a week and if it’s half as entertaining as Tuesday then the fans will certainly have value for money! We must remember this is a young group. They are developing as individuals and as a group, but the enthusiasm and desire they have shown thus far is highly commendable." Bish continued, "As always, thank you for your continued support both home and away. It never goes unnoticed and is always appreciated," so let's hope for a bumper gate for the first Saturday home game of the campaign! 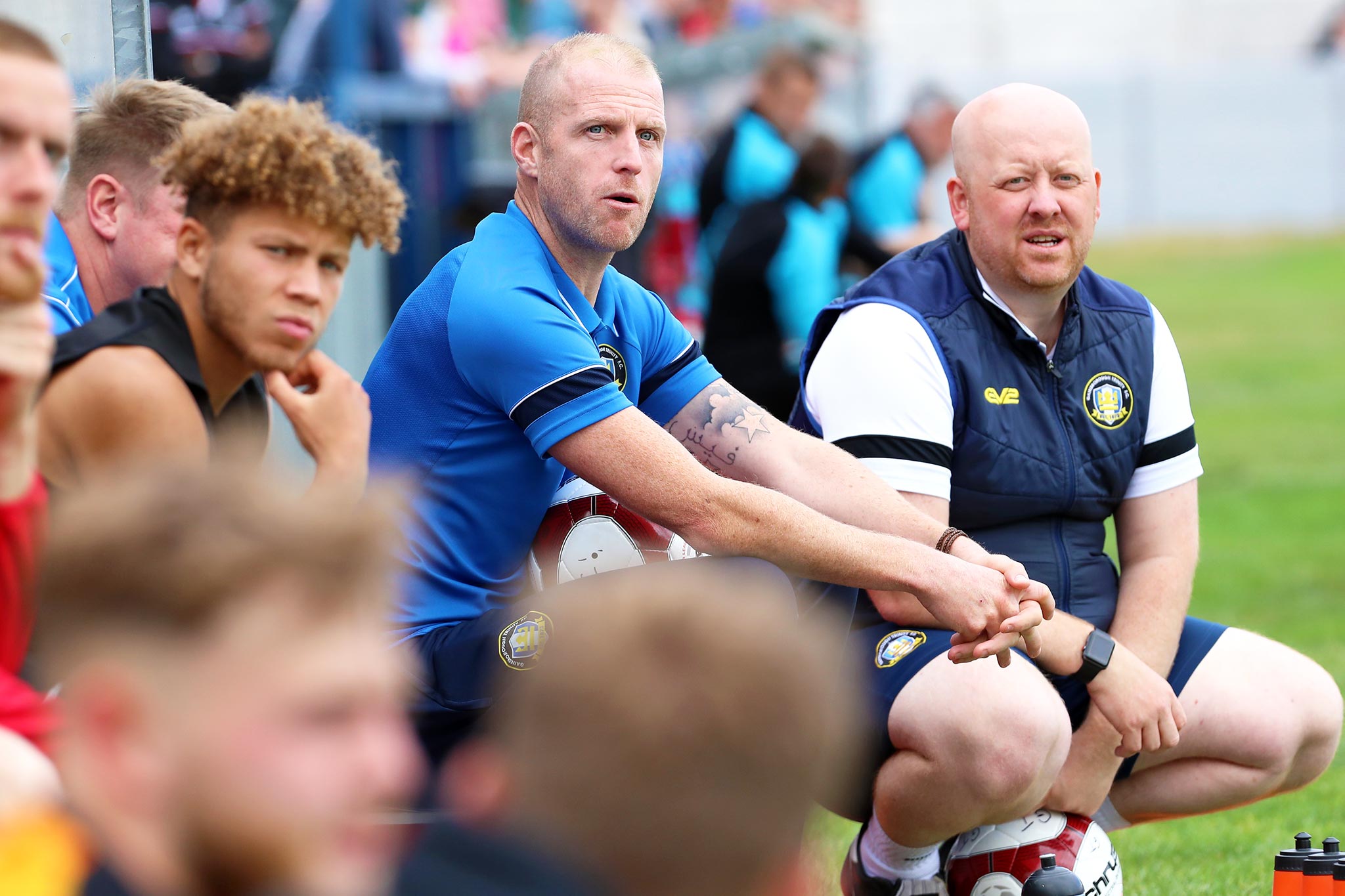 Managed by Matt Hill, Stafford Rangers are looking to continue their upward trajectory. Following a couple of seasons of disappointment, last year they were the dark horses in the league, narrowly missing out on the play-offs at the end of the season. Tom Tonks, their central midfielder catching the eye with a number of impressive performances, boasting an enormous long throw- and chipping in with a number of crucial goals and assists, he's already up and running on the goal front this season!

Played for Both: In the Trinity squad this season are Brad Grayson and Cieron Keane. Two former representatives of the Staffordshire outfit, looking to lock horns with their former employers. Last time the sides met at the Northolme, a Keano thunderbolt looked to have given Tom Shaw's Trinity all three points, only to be pegged back, deep into stoppage time at the end of the game.

Entrance is pay on the gate, with both cash and card payments accepted. Season Tickets are valid for this game. Tickets can also be purchased ahead of the game by heading to our online portal, linked here. Away supporters are advised that The Blues Club, next to the turnstiles, is more than willing to accommodate travelling supporters, with vast selection of drinks on draught, to cater for all tastes and pallets. Ahead of the game Tottenham Hotspur vs Wolverhampton Wanderers will be shown on the big screens, while afterwards AFC Bournemouth and Arsenal lock horns in the televised clash kicking off at 5.30pm.

For those driving, there is a car park opposite the main turnstiles. There is also ample street parking around the ground, but please be mindful of our local residents and do not park on private car parks, or obstruct driveways. We thank you for your cooperation. Tickets are priced at £12 for adults, £8 for concessions (16-18 and 60+) and £4 for under 16's.

The cover photo for Issue 2 of the 2022/23 Matchday Programme, shot by Club Photographer Russell Dickens features our goal scorer and captain, Andrew Wright. Inside this weekend’s 36 page edition of the Holy Blues Review, there is plenty happening: Cieron Keane is our poster boy, as he features in the new series First and Last. Dale Storey looks ahead to some tough journeys for Gainsborough in the coming months, as well as recalling his midweek trek to Banbury, and what happened the last time he was there!

Phil Anderson reviews the letter B in his Trinity A-Z, where there is a little bit of Lincolnshire rivalry discussed. There’s a double page poster pull out of the Trinity squad, sporting their brand new grey away kit, proudly sponsored by EFW Transport. Stafford’s Craig Cartwright reviews the campaign just gone, and the possibilities this season could bring, while we also hear from Neal Bishop, Andrew Wright and new director, Ryan Smith, in from the Board Room.

Elsewhere in the Pitching In Northern Premier League there is a full fixture list scheduled. All games kicking off at 3pm. Feasibly, just about anything can - and probably will happen! Here's the full list of fixtures to save you looking elsewhere!