Formed as recently as 1992, Barwell Football Club are currently playing at their highest ever level. The Step 3, Southern Premier League Central side, visit the Dave Longstaff Martin and Co Arena on Saturday in the Isuzu FA Trophy Third Qualifying Round. Neal Bishop’s side will be hopeful of adding more misery to the Leicestershire based side, as we look to progress in the senior non league Cup competition.

Boosting the Blues, is Harry Lewis. Unveilled earlier today, the young left sided player signed on loan for a month from Scunthorpe United. There is also set to be a familiar face on the bench. Darryn Stamp returns to the club in an assistant role to support the management team, with full details of his appointment due online shortly. Masai Arbouin has today left the club. We would like to thank Masai for his efforts during his time with us and wish him well for the future. 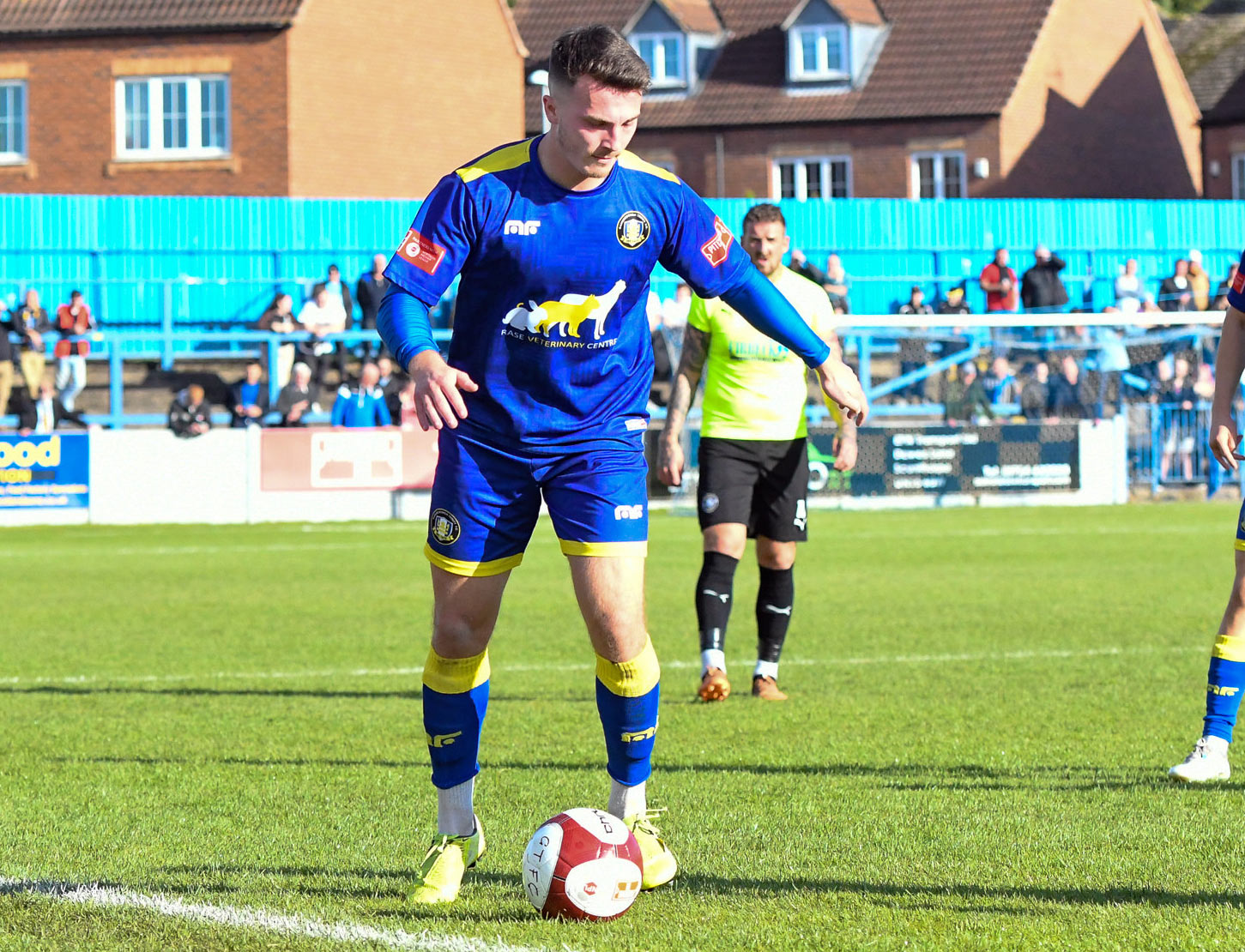 Prosper Keto remain on the long term injury list, but there are no other fresh injury concerns as Bishop and Stamp look to navigate the third qualifying round and set up a first round proper tie. The winner of this game is set to pocket £2,450 with the losers handed £625. This tie will be decided on the day. If the scores are level at the end of ninety minutes, it is straight to penalties to decide who progresses to Monday lunch times’ draw. News of which is usually released shortly after 1pm on our social media channels.

In the league, Barwell have won once at home in addition to their victory over Royston, a victory over Ilkeston all the way back in August, on Bank Holiday Monday. In terms of cup competitions, Barwell bowed out, beaten 4-1 at home by National League North side, Ke

ttering Town. The tie set up because of a replay victory over Highgate United in the First Qualifying Round. Back in ’92, Barwell were formed as the result of a merger between Hinckley of the Midland Combination Premier Division and Barwell Athletic of the Leicestershire Senior League Premier Division.

The Canaries are hoping for a break from league action that currently sees them sat third bottom in the table. With nine points from ten games, our visitors will be hopeful that the Trophy provides a welcome distraction. Three draws, two defeats and one victory in their last six games is form that goes out of the window when cup games roll round, though their 4-2 victory away at Royston Town at the end of September would have provided a rare moment of cheer so far for our next opponents.

The Board of Directors remain committed to offering the reduced prices for cup games this season, tickets priced at adults £10, concessions £6 and U16s £2, savings on the standard league prices. As always, The Blues Club provide a warn welcome to both home and away supporters, with the live game shown on the big screen after the main event on the Northolme. This weekend’s offering is Brighton vs Spurs kicking off at 5.30pm.

Inside the latest edition of the Gainsborough Trinity Matchday Programme produced in association with our friends at Matchday Creative, Iren Wilson features with his first and last. BBC Radio Lincolnshire's Dale Storey discusses the pros and cons of an FA Trophy run and his delight at the abolishment of replays in the competition. Phil Anderson continues his A-Z with a look at. From Under the Bed with Steve Andrews uncovers some treasured programmes from recent seasons, including one with a cover photo of Dave Frecks and Terry Fleming following a victory over Boston United in the Lincolnshire Senior Cup, it's always worthwhile mentioning that one! There's a history of our opponents, notes from the boss Neal Bishop and Club Captain Andrew Wright, plus some cracking photos of our mascots from last weekend's game. In full colour and priced at £2.50, grab your copies at the turnstiles today!

There are six all Pitching In Northern Premier League clashes in the Third Qualifying Round of the Isuzu FA Trophy, being played simultaneously. Thus meaning there will be at least half a dozen sides through to the next round and potentially more disparity in terms of the league table following the next round of the competition!

Other Northern Premier League sides in action are detailed below, five teams with home draws, Ashton United possibly facing the toughest task, with Dunston visiting Hurst Cross. On the road, Bamber Bridge travel to Macclesfield in the Tom Beresford derby. And Stafford Rangers make another trip to Lincolnshire when they travel to Spalding United.