Gainsborough Trinity fell to an opening day defeat in a re-run of last season's opener away at Nantwich Town's Weaver Stadium. Despite taking a lead early in the second half, the Dabbers hit a three-minute double salvo to turn the score-line on its’ head, sending the Holy Blues home with nothing to show for a whole-hearted display in Cheshire. The two sides matched up, with both management teams opting to get the ball out wide wherever possible and with both sides' midfield threes looking to spring, it was an engaging first half, but one that yielded little in the way of clear-cut chances.

Sean Cooke went close for the home side, having linked up with Joe Mwaslie, but he failed to catch his effort properly and Joe Green was able to smother comfortably. Kingsley James, covering every blade of grass in the middle of the park, broke up the play, drove forward and set the ball out wide to Gavin Allott, before continuing his run. As the ball fell kindly to the midfielder, he could only scuff his finish wide of the upright from around about the penalty spot.

As the Dabbers built patiently down the right-hand side, Mwsalie, Hughes and James Lawrie combined, the latter allowed time to get off a shot, which Joe Green was equal to. The hustle and bustle of the Trinity front duo was unsettling the three centre backs of Nantwich, with Gavin Allott allowing little let up for the three at the back. Not giving up a lost cause, he teed up his partner, Ashley Worsfold and he got a quick effort off, that had the sting taken out of it by a last ditch defensive intervention.

Trinity started the second period with renewed vigour. A floated free kick from Harry Middleton caused all kinds of constellation inside the Nantwich penalty area, but Kingsley James and Ashley Worsfold couldn’t profit. Nathan Stainfield then powered a header over the bar from Middleton’s corner, but it wasn’t to be long before Gainsborough had the break through, nine minutes into t 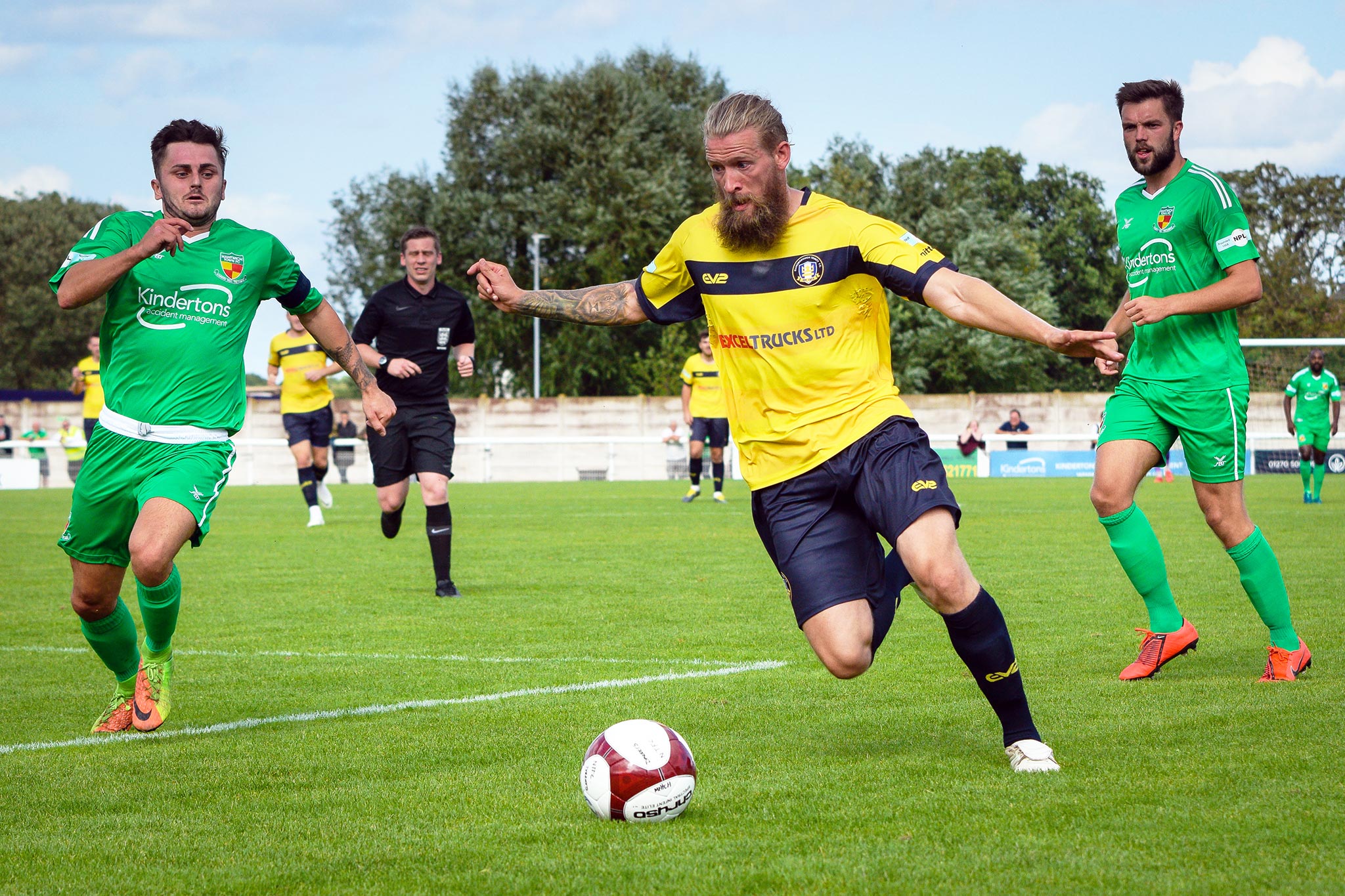 he second half, Joe Maguire’s ball forward found Worsfold, who flicked on, and with Gavin Allott powering forward, he slammed a thumping effort beyond the despairing dive of Greg Hall, that was in from the moment it left his right boot.

At this stage, Trinity were in control, handling the Nantwich threat absorbing the pressure and looking to hit the hosts on the counterattack. Kingsley James pulling the strings set Middleton to cross, his ball into the box found Worsfold, but his header lacked power as Greg Hall gathered under his crossbar.

Nantwich boss, Dave Cooke made a change, throwing on Luke Walsh and within a couple of minutes, the home side were level. A looping cross on the run from right wing back Casper Hughes caught Joe Green in two minds as he back pedalled and as the 'keeper failed to tip the ball over the bar, or claim the cross, he gifted the en-rushing Nantwich number nine, with what will be his easiest finish of the campaign, from less than a yard out.

Gainsborough's task became an uphill battle three minutes later when Joe Malkin doubled his and Nantwich’s total. With Stainfield and Hotte colliding, Malkin broke free, racing onto Sean Cooke’s lifted through ball, to lift over Green and give Nantwich the lead.

The Holy Blues rallied, boosted by good numbers on the road, but couldn't find an equaliser, despite the best efforts of Worsfold, James, Allott and co. Allott looped a header goal-wards from Sam Topliss’ recycled ball into the box, only to see Greg Hall tip the header behind. From the corner, the ball pinballed around the area, before skipper Nathan Hotte fired at goal, Hall again in the right place at the right time to smother. And with that, suffocate any chance of Trinity grabbing a late equaliser.