Gainsborough Trinity and Cleethorpes Town played out a goal-less draw at the Martin & Co Arena, as pre-season finally drew to a close ahead of next weekend's BetVictor Northern Premier League campaign curtain raiser away at Nantwich Town. On a windswept afternoon on the Northolme, where anything not bolted down, was likely to take off, Trinity boss Liam King had virtually a full-strength squad to pick from and with that deck, a selection headache awaits for him and his assistant, Ross Hannah.

As the elements threatened to wreak havoc, The Owls were closest to breaking the deadlock, a move down the Trinity right, instigated by Jon Oglesby saw him tee up on loan Grimsby forward Brandon Buckley, his deft touch into Brody Robertson saw the forward ruffle the side netting. At the other end, Ross Hannah was involved in the action, his floated free kick finding Kingsley James, only to see his headed effort powered the wrong side of Theo Richardson's upright.

Alex Flett switched the play for Cleethorpes, finding Jon Oglesby, his early cross picked out Josh Batty, but he couldn't find the target for the visitors. With both sides combative, niggle set in as the game progressed towards half time, a series of fouls punctuating proceedings. Ross Hannah forced a smart save from Richardson low down to his right, the 'keeper reacting smartly to deny Gavin Allott from close range, before Allot rolled the ball back to the off-balance Nathan Stainfield who skewed his effort wide of the target.

Josh Batty then did the hard work as he brought a lofted ball under his spell, as he rounded Joe Green, centre back Joe Maguire got round well on the defensive cover and somehow blocked Batty's attempt to roll the ball home. Harry Middleton made way for Shane Clarke a couple of minutes into the second half, and the Player-Coach was soon in the thick of the action. Clarke fo 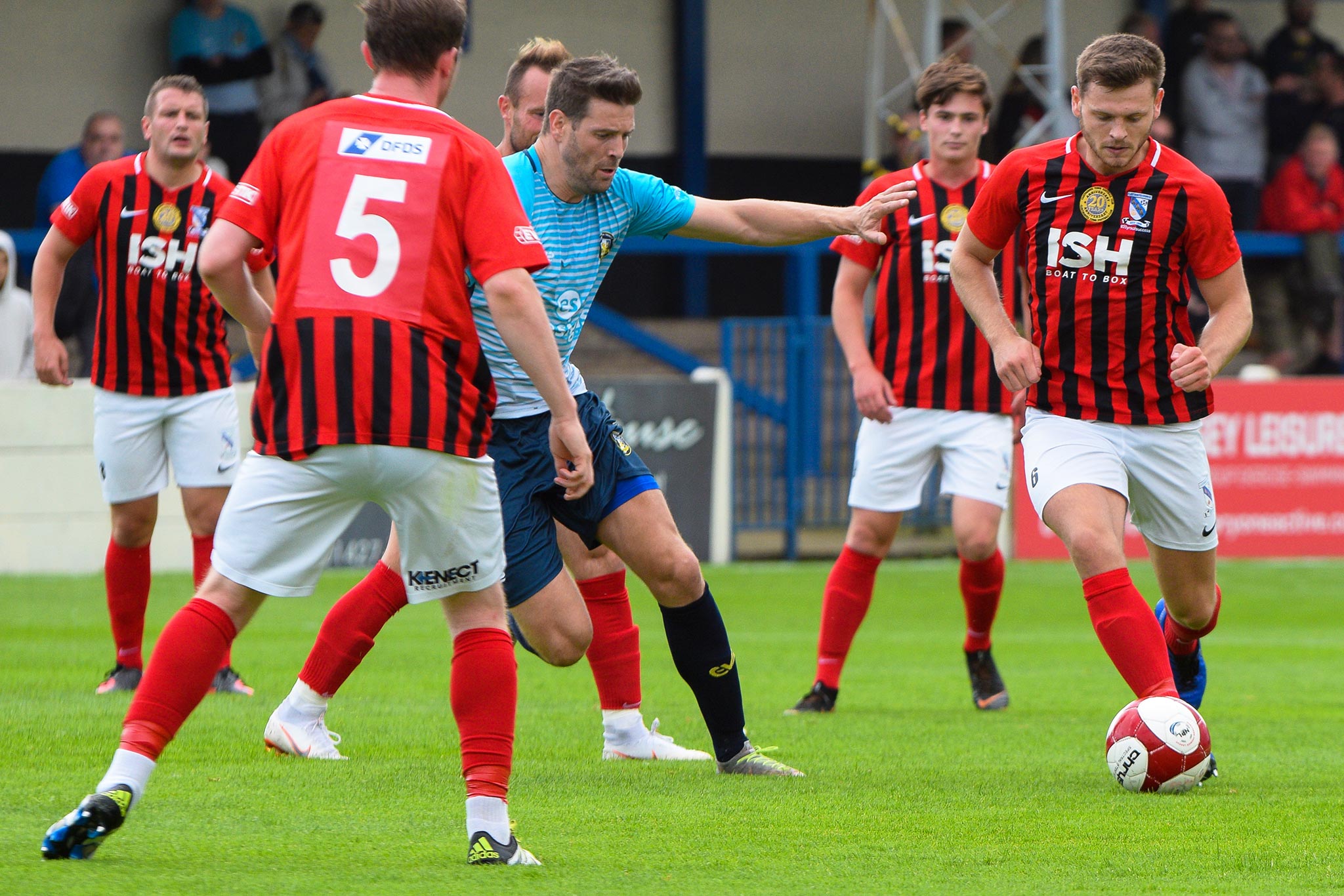 rcing a fine save from the visiting goalkeeper, following in after Kingsley James’ effort was beaten out. With the Trinity midfield trio of James, Clarke and Simon Russell looking to impose themselves on the game, Russell flashed an effort a yard over the bar from the edge of the box.

Just before the hour, both 'keepers were called into action, first Joe Green had to stretch at full length to keep out Jon Oglesby's curled effort, before Ross Hannah caught hold of a howitzer, but somehow Theo Richardson was equal to the test, acrobatically turning the ball over for a Trinity corner.

After Gavin Allot was fouled holding the ball up, he was found by a Sam Topliss free-kick, but the hitman couldn’t steer his header goal-wards as he towered over his man. With a plethora of changes littering the final quarter of the game, clear sights of goal for both sides were at a premium.

Referee, Mr Topless adjudged Worsfold was fouled just outside the box and Joe Maguire stepped up to thump an effort through the wall, that Richardson was equal to, parrying his effort away from goal.