A watchable game somehow ended goal-less in Lincolnshire as Gainsborough Trinity and Warrington Town cancelled each other out in the sunshine. With both teams prior to kick off locked on four points with a win and a loss apiece, Saturday’s goal-less draw meant that the sides could still not be separated come 5pm. The main talking points of the first half centred around refereeing decisions, both going against Gainsborough’s leading marksman, Ashley Worsfold.

First referee David Jones waved away a penalty appeal after a deft touch by Gavin Allott, as Worsfold looked to round veteran visiting ‘keeper Tony McMillan, James McCarten appeared to scythe the front man down from behind. Undeterred, Trinity continued to press and seven minutes later and with Worsfold primed, ready to pull the trigger, he was taken out by last man James McCarten, with everyone in the ground expecting a red, the Wire centre back breathed a huge sigh of relief, as a caution was the only punishment. Joe Maguire’s free kick was well hit, but it wasn't troubling McMillan in the Wire goal.

Good play from Ben Garrity, at the heart of the Warrington midfield, saw him find Tony Gray and his weighted through ball found Alex Byrne, but the returning winger, couldn’t curl an effort on target, missing Joe Green’s top left hand corner by half a yard.

In the second half, a five-man Trinity attack ended with Kingsley James firing over as Warrington put bodies on the line. A sublime one touch attacking move threatened to slice open the yellow rear-guard, but last ditch defending, ultimately resulting in an injury to Steve Jennings, looked a brilliant opening for the Holy Blues. The experienced midfielder being withdrawn shortly afterwards. Louis Barnes rifled into the side netting when Matthew Chadwick’s free kick cannoned back off the wall, t 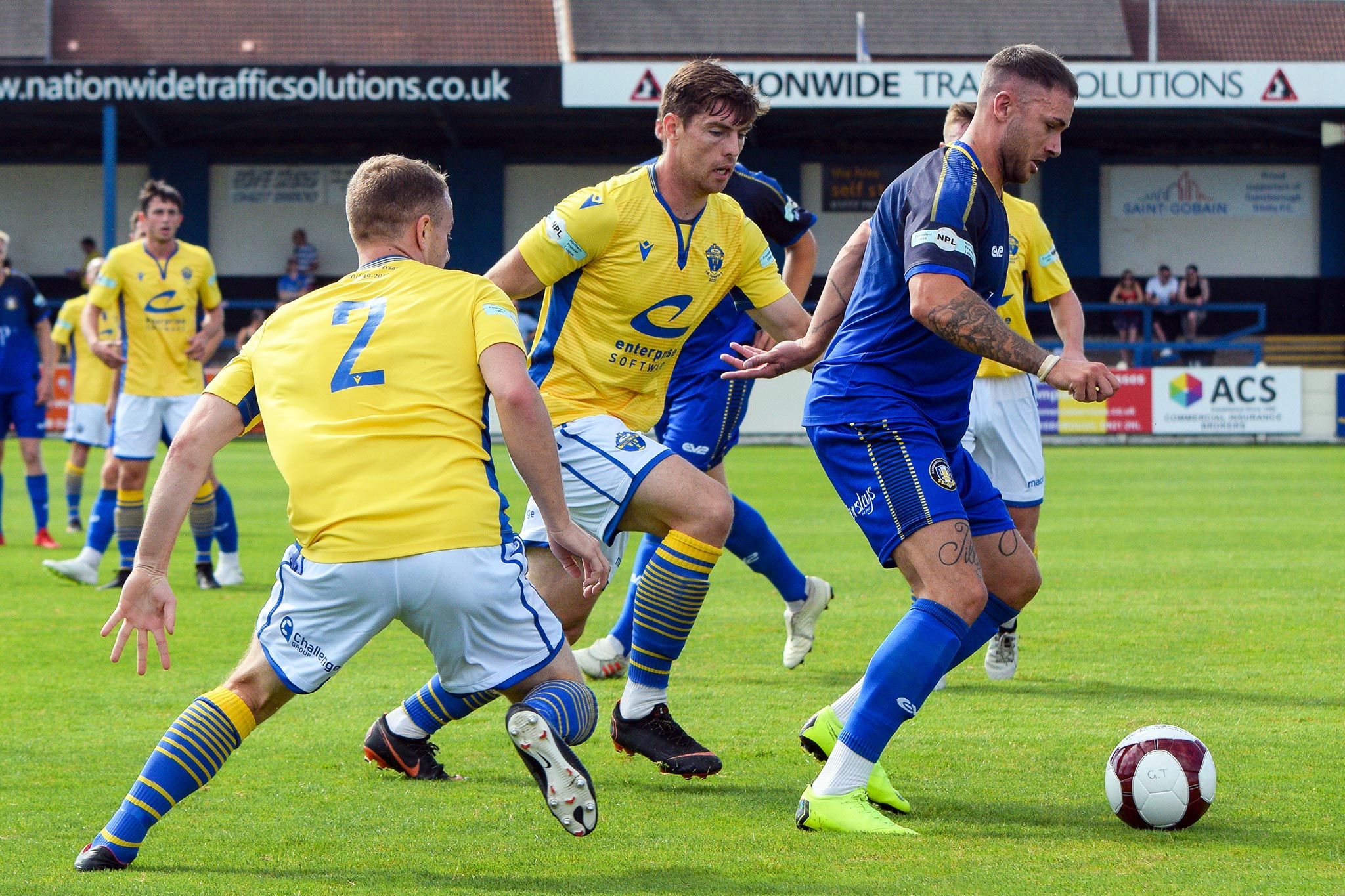 o the full back. With players up in support it was perhaps the wrong decision by Barnes.

Eight minutes from time an almighty goal-mouth scramble threatened to unhinge all of Trinity’s hard work, but Tony Gray couldn’t convert. Ross Hannah then went close soon after coming on as substitute, but leaning back he couldn’t hit the target from Allott’s cut back.

Wire sub, Josh Amiss then headed over from Mitchell Duggan’s centre And Gray flashed an effort narrowly over the Gainsborough bar, but as time clicked into the sixth minute of added time at the end of the game, Joe Maguire saw his header roll agonisingly wide of the far post as he did brilliantly to get on the end of Harry Middleton’s set piece.

A share of the spoils on a hot August afternoon perhaps on balance a fair result, but one that may have swung another way with the presence of Lady Luck