Matlock Town emerged victors from Bank Holiday Monday's BetVictor Northern Premier clash. Despite being pegged back, the Gladiators secured all three points in added time to maintain their winning streak at the start of the 2019/20 season. In Trinity's fourth game of the season, boss Liam King shuffled his pack for the first time, replacing Gavin Allott and Simon Russell with assistant boss, Ross Hannah and player coach Shane Clarke as the Blues lined up for their second game in three days.

The Holy Blues were slow to get started in 33-degree heat, with tormentor in chief Dan Bramell looking to penetrate the Trinity rear-guard at every opportunity. Quick and direct, Bramell's trickery saw Sam Topliss & Joe Maguire into the referee's notebook early. With Matlock probing, it wasn't long before they had a breakthrough, the source of that break through however was in the form of Blues' skipper, Nathan Hotte. Bramell's corner was headed back into the six-yard box, Hotte getting the decisive touch to loop the ball over Joe Green in the Gainsborough goal.

The Gladiators continued to press, Bramell surged into the box, but struck the face of the post, as he drew Green. Hope flickered for Trinity, when Kingsley James almost robbed Jon Stewart on the edge of his box, the former Gainsborough 'keeper just about recovering, before Worsfold somehow glanced a header wide of the upright when well placed. Joe Green did well to deny Matlock a second as Bramell had more joy down the Trinity right. Green saving with his legs to keep the Holy Blues in touching distance.

Having seen enough, King looked to his bench on half an hour, withdrawing centre back Joe Maguire, replacing him with the attacking Brodie Litchfield. Tweaking the formation in the process, the Holy Blues immediately looked more comfortable. Anthony Wright was wasteful though, dragging an effo 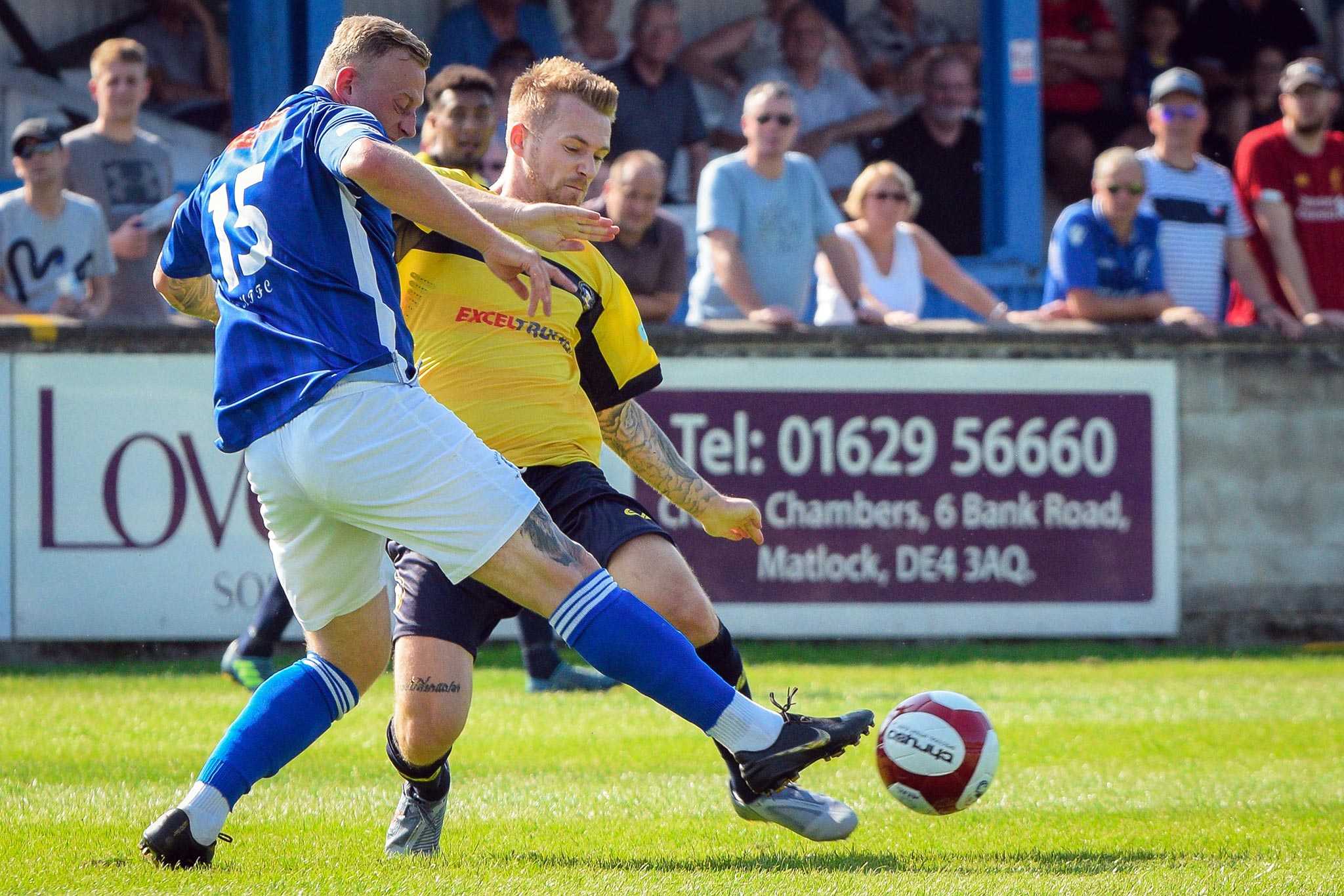 rt wide of Green's right-hand post when he should have done better. Trinity lucky to get to the break with the deficit only standing at one.

Gainsborough came out in the second period with Liam King's words still ringing in their ears, Ashley Worsfold missing a gilt edge opening three minutes into the second half. Worsfold then nodded wide when well-placed as Trinity created more problems for the hosts. Bramell again threatened down the Trinity right, playing a neat one-day with former Blue, Josh Lacey (on as a first half substitute for the injured Nathan Whitehead) only to see his effort comfortably saved by Green.

Nathan Stainfield saw his powerful downward header blocked en-route to goal as Trinity continued to huff and puff. In quick succession King threw on Gavin Allott (for Hannah) and Curtis Morrison (for Harry Middleton) as the visitors looked to step up a gear. Allott was soon into the action, somehow seeing the ball cannon back off the crossbar, before Stewart could recover his ground and grasp the loose ball.

It looked like the Gladiators would be made to pay for their profligacy in front of goal when on 82' Curtis Morrison showed a clean pair of heels, Adam Yates bringing down the flying winger for a penalty. Up stepped Ashley Worsfold to draw Gainsborough level. Holding his nerve to slam past Stewart.

The equaliser seemed to reawaken Matlock, as Crouz flashed a free kick wide of the post, before Stainfield flung himself in the line of a rasping goal bound effort. But into six added minutes at the end of the second half, Dwayne Willey kept a deep free kick alive at the back post, and his harmless ball was turned into his own goal by Joe Green, to give Matlock the lead, with not enough time for Trinity to go again. Thus leaving Gainsborough with four points from four games, as the Gladiators made it four wins from four at the summit of the BetVictor Northern Premier League.