A Brad Grayson wonder strike wasn’t enough for Gainsborough Trinity as Lancaster City left it late to progress in the Buildbase FA Trophy First Round proper, when Brandon Lonsdale struck in added time to seal the Dolly Blues’ passage to Round 2, with victory at The Northolme. Making four changes to the side beaten by FC United of Manchester a week ago, Head Coach Tom Shaw brought Lewis Carr, Cieron Keane, Toby Gould and Jovon Makama in for starts, with Lewis Butroid, George Hornshaw & Harry Jessop dropping to the bench, while Isaac Rice was missing from the squad altogether. There was also a positional shuffle, as Bishop moved into midfield, as club captain Carr started alongside Minkley & Jemson in a three man back line.

Gainsborough were slow to get out of the traps, struggling to retain possession and with Lancaster starting on the front foot, Tom Kilfin lifting a lobbed effort over the bar, after he was played in by Dawson. Trinity were under pressure.

The Holy Blues did have the first effort on target though, when Gould slipped in Grayson. The leading marksman forcing a good save from Aidan Dowling at his near post.

The home side were punished for the sluggish start on eight minutes though, when Sam Bailey was afforded too much time and space to deliver from the right wing, Paul Dawson’s free-header giving Matt Yates in the Gainsborough goal no chance.

Trinity tried to get back into things immediately. Keane’s short corner was played back to him by Wollerton. Delivering low right footed, the Lancaster defence couldn’t clear their lines. Both Grayson & Makama poking at efforts as the ball wouldn’t sit kindly in the six yard box for the striking duo.

Lancaster had chances to extend their lead, as the Holy Blues struggled to find a foothold in the game. Paul Dawson was denied brilliantly by Matt Yates in the Gainsborough goal, after Andy Teague stood a ball up to the back post. Yates making himself big – and keeping the Holy Blues in the game. Before they saw a goal disallowed for offside. A late flag, curtailing the visiting celebrations.< 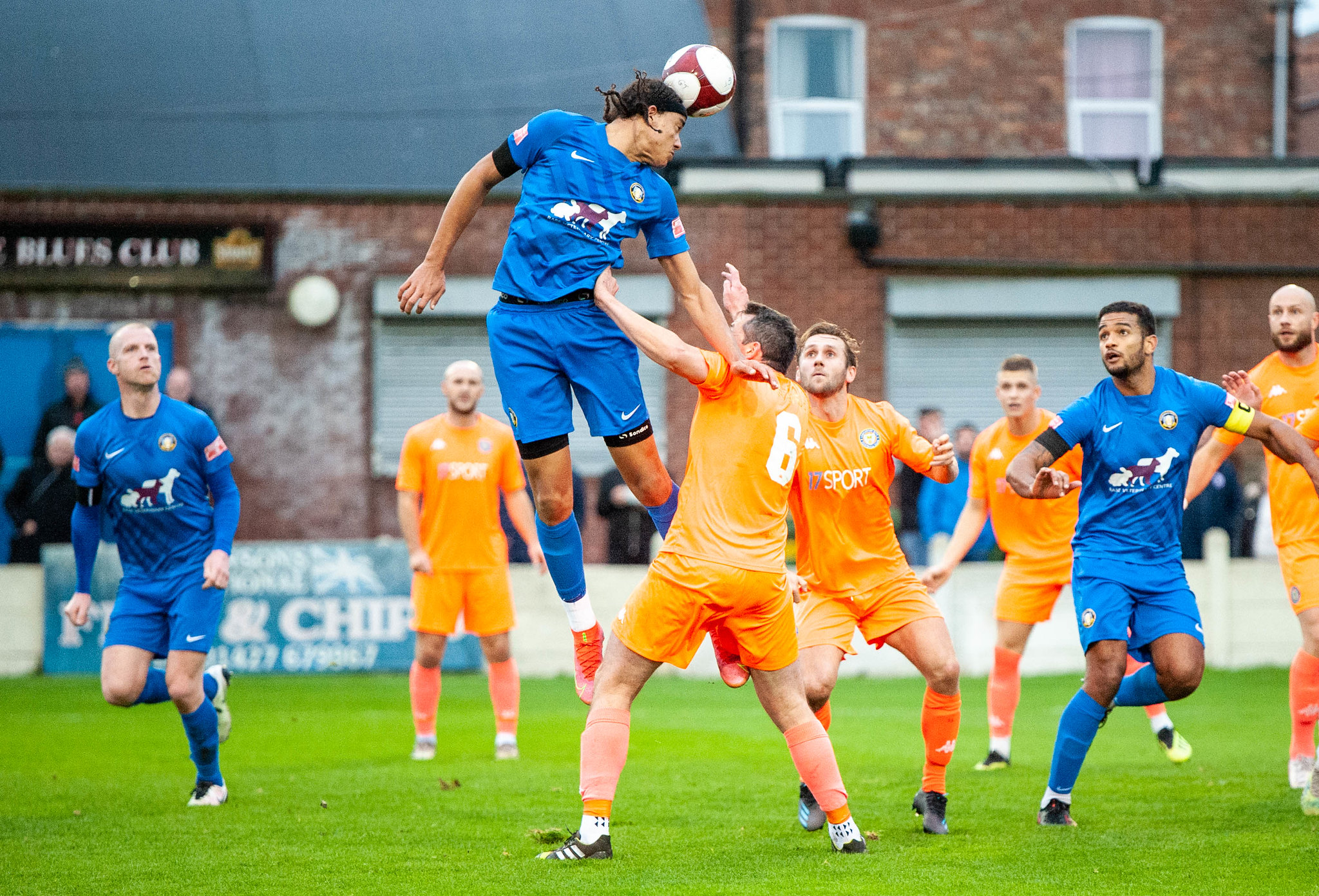 Yates was by far the busier to the two ‘keepers. Charlie Bailey given time and space to turn and shoot inside the box, getting an effort on target, low to Yates’ left hand side. Glenn Steel did well to win the ball from Makama. Finding Charlie Bailey, he released Kilfin. But the visiting forward’s effort hit the side netting, when he really should have done better.

The longer it stayed at 0-1 though – the home side always had a chance… Dawson played in Charlie Bailey, who took his effort early, curling a yard over the bar from twenty yards out, with Yates beaten. Dowling then did well to save with his legs after Jovon Makama had played in Toby Gould. But the Gainsborough man saw his effort cannon off the ‘keepers legs and away to safety.

Two minutes into stoppage time at the end of the first half, Gould was fouled twenty-five yards from goal. And Grayson levelled things up. Curling home a sublime finish into Dowling’s top right hand corner – giving the visiting custodian no chance.

The Holy Blues huffed and puffed. But lacked any real quality. The visiting 'keeper in fact, without a second half save to make.

Bar several routine crosses for him to take, he won't have had many quieter forty-fives. The closest either side came to settling things came midway through the second half, when an ambitious effort from visiting skipper Andy Teague was tipped over by the back-pedalling Yates. The visitor's veteran centre back taking aim from inside the centre circle.

Trinity tried to get out, but found themselves increasingly frustrated as Lancaster penned Trinity in. Samuel Bailey a persistent threat with his set piece delivery, by hand and foot consistently testing the Gainsborough rear-guard.

In injury time at the end of the game, late Lancaster substitute Lonsdale sent the visiting Dolly Blues’ support home happy, finishing off a tidy team move, down the visitors left, meaning the Holy Blues' primary focus this season is climbing the PitchingIn Northern Premier.

And the challenge doesn't start much harder than next weekend, when we make the long journey up the A1 to South Shields. Let's hope as many of the Trinity faithful can make the journey to support Tom Shaw's developing side, as together, we are stronger.