Gainsborough Trinity's unbeaten run came to an end at eight, as FC United ran out victorious in an engaging five goal thriller played out in the Manchester rain. Despite falling three behind a spirited Trinity rallied and were the better side in the closing stages, unfortunately coming up just short of a fantastic comeback. Making four changes to the side that despatched Coalville Town last weekend. There was a return in goal for Matt Yates, as Sam Long was recalled by parent club Lincoln. Neal Bishop resumed at the heart of the defence, having been rested last time out. In midfield George Hornshaw came in for Liam Waldock and Curtis Morrison dropped to the bench as Scunthorpe Town youngster Harry Jessop started up top alongside Brad Grayson.

In a game played in wet and wild conditions, the Broadhurst Park playing surface soaked up the worst the heavens could throw at it. The slippery, skiddy conditions adding to the occasion. With both sides firm in the challenge, Trinity though, in the eyes of the referee, occasionally too firm. A strong, but fair challenge from Neal Bishop, drew a talking to from Richard Abson, before Grayson found himself in the referee’s notebook.

On the half hour, Trinity had the best chance of the game, when Wollerton slipped in Harry Jessop. The on loan forward rounded Lavercombe in the United goal, and looked like he had rolled the ball into the empty net, only to see Aaron Morris round on the defensive cover to clear off the line. Moments later, The Rebels made Trinity pay. A harshly awarded free-kick was awarded against the incensed Bishop. Adam Dodd stepping up to curl the ball over the wall, giving the returning Yates no chance. Trinity’s veteran centre back shown a yellow card for his continued protestations, as the home side celebrated their opener.

On 37, Bishop was again in the thick of things, the Holy Blues putting bodies on the line to protect Yates’ goal. Bish getting the bravest block in, as the ball ricocheted like a pinball in the penalty area. Trinity looked to get back into the game, but United looked a threat going forwards. Matt Yates was at hi 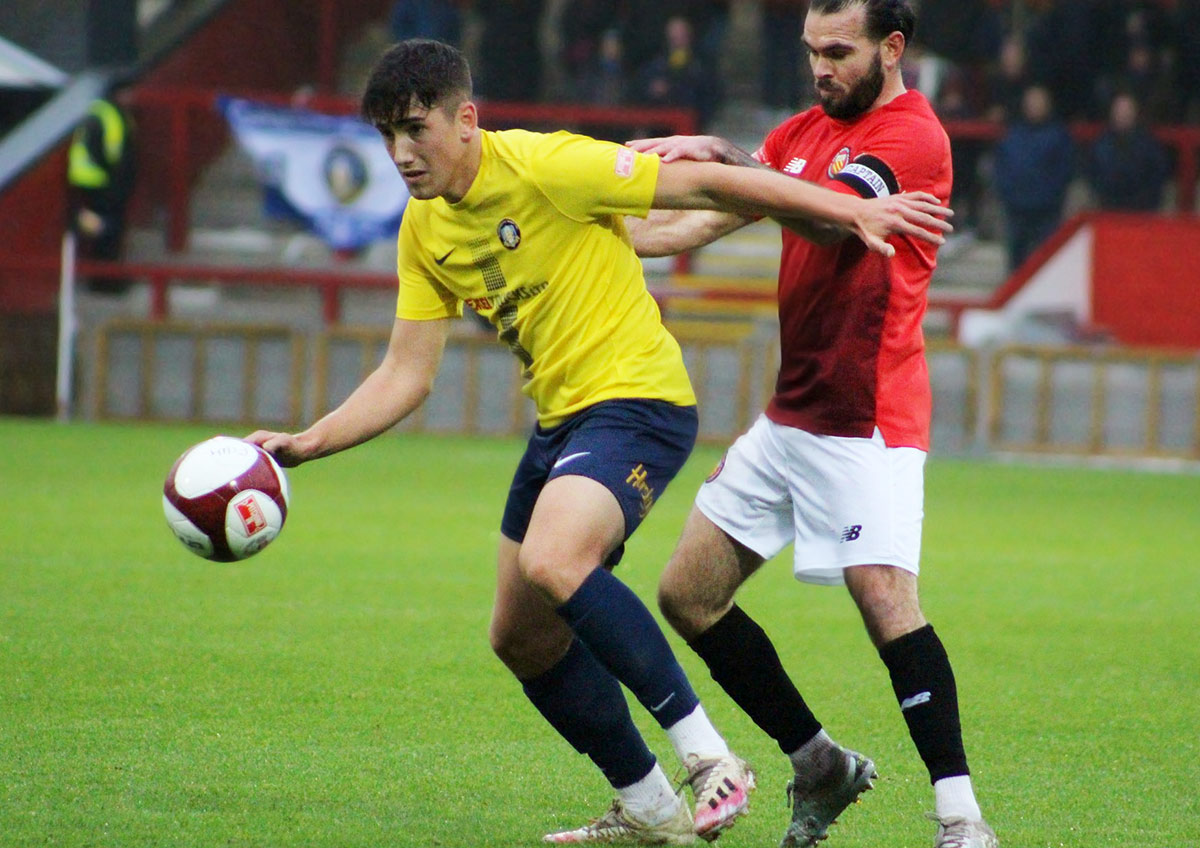 s best to make a fine double save though. Bradley Holmes, the inform striker was allowed space to drive at the heart of the Trinity defence. But his effort was brilliantly saved by Yates, low down to his right. Quickly to his feet, he then spread himself well, to block Cian Hayes’ follow up effort. Half time: FC United of Manchester 1 Gainsborough Trinity 0

Gainsborough started the second half on the front foot, but found themselves 2-0 down shortly after having another effort cleared off the line. The hosts scoring against the run of play after Sam Burns was allowed too much time and space to get a shot away. Scalding the Holy Blues and extending FC United’s advantage.

Two soon became three, when a long Lavercombe clearance zipped off the greasy surface, finding Regan Linney and he finished past Yates to make the game safe. Or so the hosts thought.

Trinity Head Coach, Tom Shaw had other ideas though. He replaced George Hornshaw with Toby Gould. Soon after introducing Keane and Makama to the fray. And the substitutes would have a positive impact on the game, helping to haul the Holy Blues to within touching distance.

Alex Wollerton and Makama linked up. Unselfish play from the teenage forward, saw him return the ball to Wollerton, but his strike was easily held by Lavercombe, moments later though, a finish of real quality by the substitute, dared the travelling faithful to believe… racing into the box, Makama gave the ‘keeper the eyes and calmly rolled the ball home through the smallest of gaps at Lavercombe’s near post.

With a quarter of an hour remaining, it was all to play for. Trinity raided down the right again - and a low ball fizzed in by Wilson, was well marshalled. The man in the middle pointing for a goal kick. Gainsborough continued to search for a second goal, and it arrived on 82. Jovon Makama was again involved. Twisting and turning, this time out on the left, he made room to pick out Gould with a brilliant ball inside. Toby opening his body up brilliantly, as he took the ball in his stride, bending beyond Lavercombe to really set up a nervy finale.

FC United nearly added a fourth when Sam Burns stung the palms of Yates. A poor clearance was picked up by Luke Griffiths and he picked out Burns to the right, but the Trinity ‘keeper redeemed himself, with a flying save away to his left. As the game ticked towards full time, deep into four minutes of added time, a Lewis Butroid diagonal ball was only partially headed clear. The ball dropping for Charlie Jemson, up top as an auxillary forward. His dipping left-footed-half volley whistling a whisker wide of post and bar. The Holy Blues so nearly snatching a point at the death, instead leaving Manchester with no points, but with a great deal of pride.

The Holy Blues now turn attentions once again, to the FA Trophy, as we welcome Lancaster City to the Gainsborough Martin & Co Arena next Saturday. Kicking off at 3pm, once again, the fixture will be decided on the day, even if that means penalties are required, if the scores are level after ninety minutes. We hope you can join us, as we look to start another unbeaten run!