Gainsborough Trinity returned from a gloomy afternoon in Northumberland with no points as a goal in each half for the Highwaymen saw Trinity slip into the bottom three ahead of another key couple of home games in the run up to Christmas. Now is not the time to panic though Trinity fans, more the time to rally round once more and get behind Tom Shaw and his struggling side. Shaw recalled Callum Minkley to the starting line up alongside Curtis Morrison as the Head Coach shuffled his pack ahead of the side’s second visit to the Northeast in three weeks. His Holy Blues looking to secure a first victorious double of the season at Craik Park. Lewis Carr was absent from the travelling party as he continues to wait for the safe arrival of Mini Carr.

Morpeth were quickly out of the traps as Ryan Donaldson, swung in a cross, which was met by Ben Ramsay. Deflected behind by Joe Wilson for a corner, before the Holy Blues settled into a controlled pattern of play, without really creating a clear-cut opening. Nine minutes in, Liam Henderson put the home side in front from a Liam Noble corner, turning home from a yard out, under pressure from three Trinity players, Reid helping on the corner at the near post to mute the travelling Trinity faithful.

Trinity went hunting for the ball and pressurised the Highwaymen into an error. A free-kick twenty or so yards from goal presented Bradley Grayson with a shooting chance. Grayson worked Dan Lowson, the ‘keeper getting two hands to the effort, before Wollerton drew a sliding challenge from Ben Ramsay, as he tried to keep the attack alive. Penalty appeals were swiftly waved away though.

Morpeth saw a deflected effort onto the roof of Matt Yates’ net as the Highwaymen went back on the offensive. Then from six yards out, Yates made a fine, point blank save to deny Jack Foalie’s volley that was travelling, keeping the Holy Blues in the game. The game became scrappy, punctuated by the referee’s whistle, the man in black quick on the whistle when an advantage may have been better served to the visiting Holy Blues. His cards also quickly out of his pocket duri 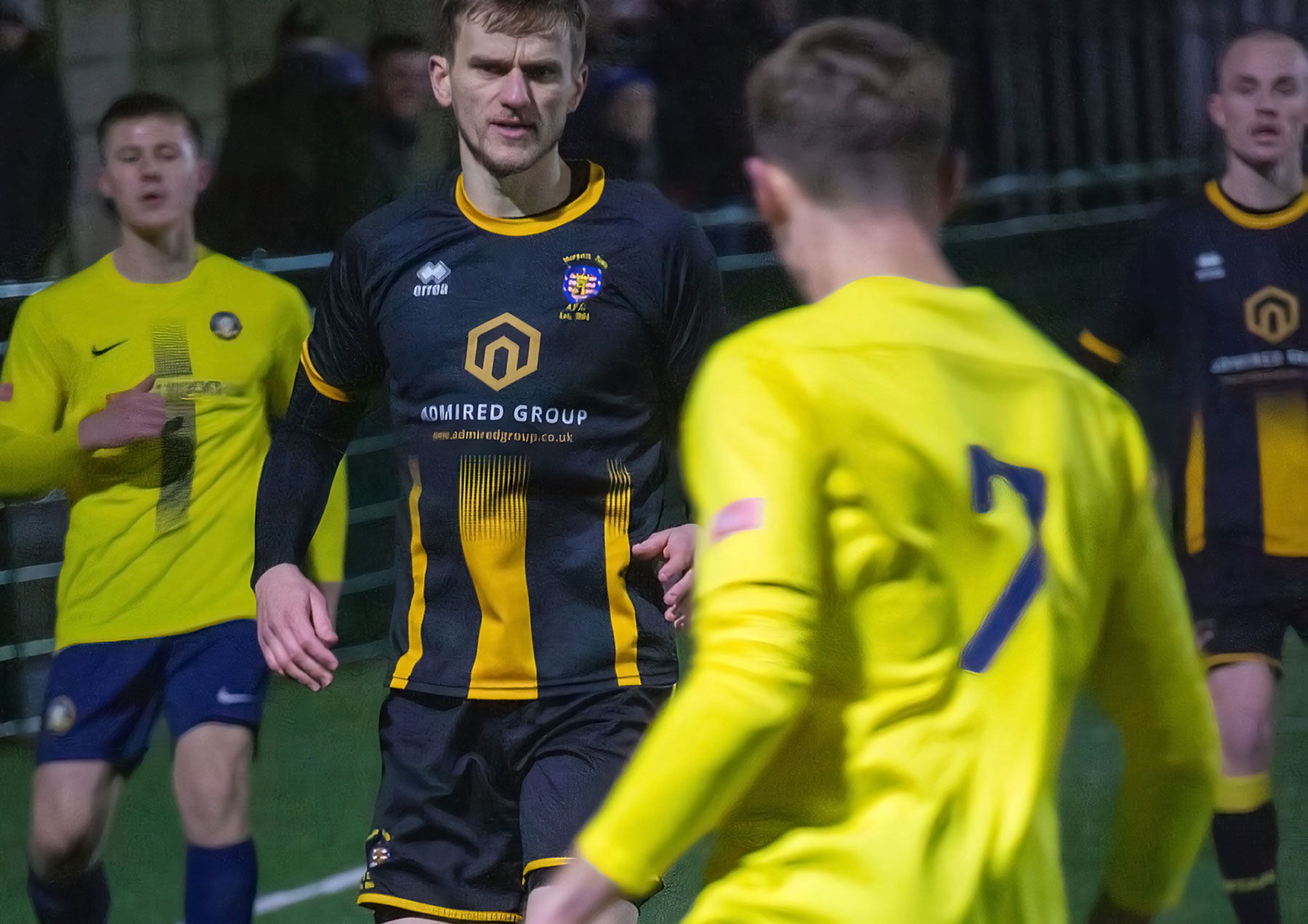 ng a first half flurry.

Sam Hodgson arriving late in the box, saw his header deflected behind for a corner kick as the home side again asked questions with balls delivered into the heart of the Gainsborough defence. Jack Foalie a willing runner over the top, didn’t give up on a lost cause, Foalie found Donaldson who picked out Henderson on the edge of the box, but he couldn’t hit the target. Isaac Rice clipped a sumptuous ball down the left-hand line, Makama, found Grayson who arched an effort goal-wards, Grayson’s shot rattling the cross bar!

Bishop then got his head to the corner first, helping the ball on. His header touched over by Lowson as Trinity applied the pressure in the closing moments of the first half. Another good save from Yates, to deny Hodgson after a quick break and Reid’s run was temporarily halted, before the ball fell to Hodgson. Again, brave goalkeeping as Yates made himself big to deny Morpeth. Ramsey not able to lift the ball over the Trinity ‘keeper.

Callum Minkley limped off as the first half drew to a close, replaced by Lewis Butroid as Grayson, deep into stoppage time couldn’t lift the ball up and over the wall from a good dead-ball position. Half time: Morpeth Town 1 Gainsborough Trinity 0.

Ben Ramsay and Liam Henderson combined, with Ramsay applying the finishing touch from Henderson’s cut back. The goal really taking the sting out of things early in the second half. Shaw responded, throwing on Declan Bacon to replace Curtis Morrison, who had been quiet for long periods of the game, but the change did little to effect the flow of the game. An effort whistled past Yates’ post as Morpeth searched for a third.

Morpeth were queuing up, before Foalie whizzed an effort past the post. A let off for Trinity! The Highwaymen had a great opportunity to add a third from the penalty spot, but Matt Yates made a fine save from twelve yards, saving well to his right from Ryan Donaldson after Chris Reid was felled, Trinity having no answer for his slaloming run.

Goalkeeper Yates was again equal to Foalie’s dropping effort as the flag was belatedly raised for offside. Trinity retorted, and Dan Lowson caught one flush in the face, Bradley Grayson’s drilled effort, cutting in from the right, Gainsborough’s first shot on target in the second half. Offering the faintest flicker that the Holy Blues’ fight might not yet be finished. Foalie’s effort beat Yates, but didn’t beat the bar, that is still shaking from the effort, even now!

Cieron Keane, on as the final Trinity change, saw his free kick glance off a Trinity head on the way through, narrowly landing wide of the far post as the Holy Blues looked for a way back into the game. Foalie was again wasteful, as he did all the hard work cutting in from out wide, unleashing a rising drive that didn’t trouble Yates. Liam Henderson then headed straight at Yates from eight yards out, before Henderson again brought out the best of Yates in the final throes. Trinity’s number one hardly deserving to be on the losing side this afternoon. His performance between the sticks earning plaudits from the home side.

Trinity now sit in 20th position, on twenty points from nineteen games. Destiny is still in the hands of the Holy Blues, but results need to turn once more. And together, with your backing – it’s not too late. Keep the faith Blues!