In awful conditions at the Gainsborough Martin and Co Arena, Matt Yates was the hero for Gainsborough Trinity as his second half penalty save was enough to earn a share of the spoils for the Holy Blues. Guessing right to save the second of two dubious second half penalties awarded by Referee Paul Roots. Trinity halted a disappointing run of form with a point at home to high-flying Warrington.

Head Coach Tom Shaw handed a debut to midweek signing Joe Parkin in the middle of the park, pairing him with Isaac Rice in central midfield. Lewis Carr returned to the starting eleven alongside Neal Bishop, while George Hornshaw slotted in at left back. There was a first start too for Dec Bacon since his return from Mickleover. Elicha Ahui was named amongst the substitutes.

Trinity had the dream start when Lewis Carr headed Rice's deep corner back across goal to veteran Neal Bishop, who finished with aplomb through a crowded penalty area - he waved his right wand of a foot to stroke home. A minute later, The Yellows could have been level as James Baillie rattled the angle of post and bar after good play by left winger Luke Duffy picked out the run of the roving right back arriving late into the box.

The home side continued to shackle the high-flying play off chasers, as the Holy Blues enjoyed large portions of the play. The visitors were not allowed to settle into their stride and that was down to the game plan of Shaw, Parkinson and Sheridan, the Trinity managerial trio, being executed perfectly by the troops on the pitch. Frustration got the better of the visitors from time to time, as niggly fouls punctuated proceedings. Breaking up the flow of the game from time to time, while the experienced Carr and Bishop maintained concentration at the heart of the 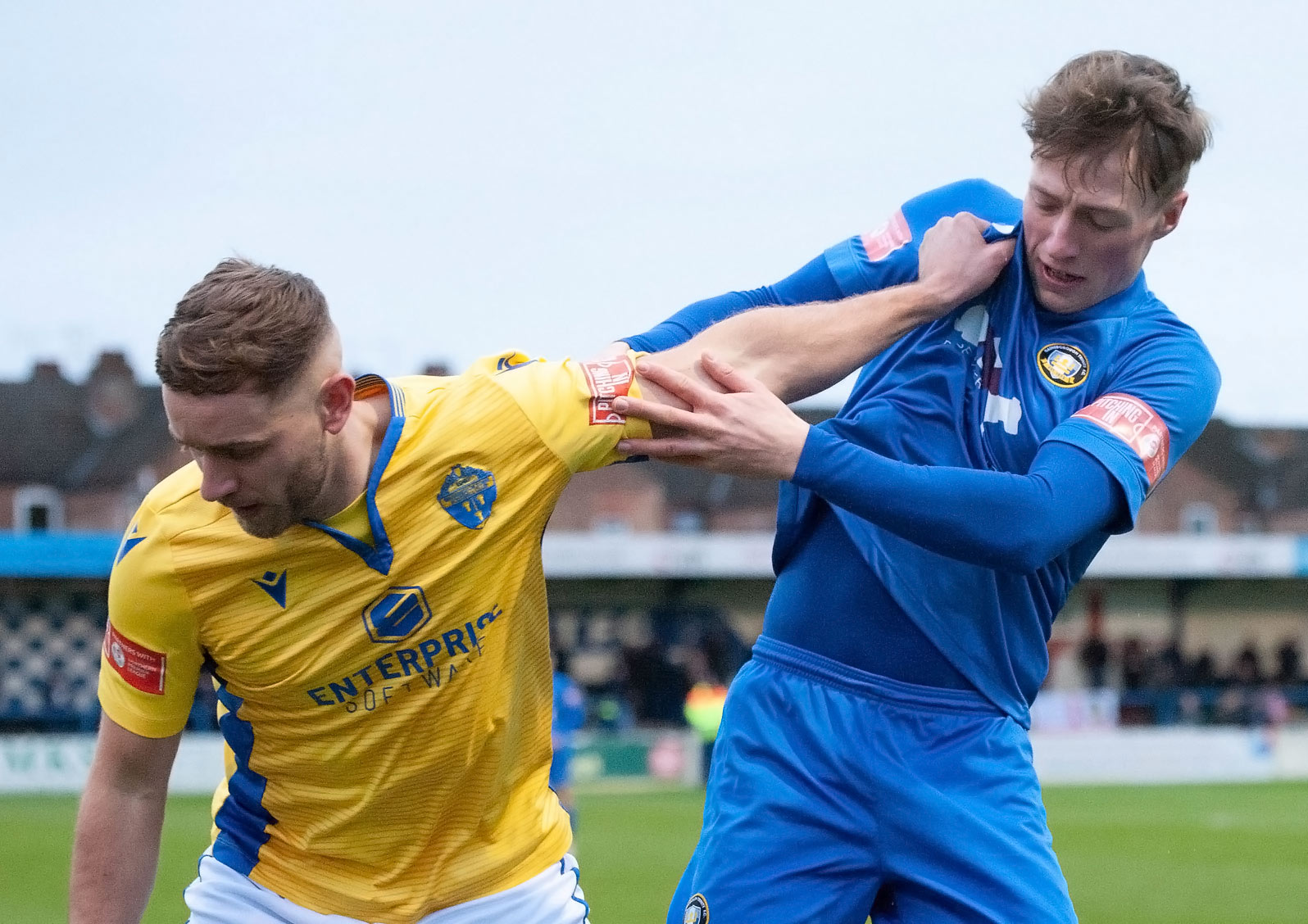 Hornshaw and Gould combined well down the left hand side to negate the threat of Grivosti, who had netted the only goal of the game in the match earlier in the season at Cantilever Park. The two snuffing out the threat, before Gould tried to release Grayson twice, only to see through balls just cut out, before Wollerton’s ball did find it’s way through only for Trinity’s leading marksman to be flagged offside.

Sean Williams’ in-swinging corner was helped on by Gubbs, the diverted header cannoning off the forehead of Mark Roberts. But the centre back couldn’t direct the ball on target, to the delight of the Trinity faithful.

Wollerton did well to intercept a Warrington ball out from defence. He found Parkin, who had the presence of mind to release the overlapping Wilson. Wilson fizzed a low ball into the danger zone, which was well held by the visiting stopper, Grayson and Bacon well placed.

The weather turned at half time, and so to did the tide, as Warrington came out of the traps at the start of the second period. Grayson beat the offside trap, as he latched onto Hornshaw’s clearance down the left, but he couldn’t pick out his strike partner Bacon. Patient play then saw Gould tee up Wollerton, who in turn rolled the ball wider to Joe Wilson, up from full back, but he saw his first effort charged down, before his follow up effort was deflected behind for a corner. Bishop helped on the resultant corner at the near post, but his glancing header flashed across the face of goal.

A harshly awarded penalty gifted Warrington the leveller. Joe Wilson adjudged to have fouled Jordan Buckley just inside the box, his feet outside, his landing inside enough to prompt Roots' decision to point to the spot. The Yellows' man outnumbered, with nowhere to go, the challenge gave the referee a decision to make - and he duly obliged. With only seven minutes of the second half on the clock, Sean Williams stepped up to send Yates the wrong way from twelve yards.

Soon after, Jay Harris poked a ball through for the diminutive Grivosti, but Yates did well to stand up and force the winger wide, before spreading himself well at the attacker’s feet. Wollerton and Gould again combined to set up a shooting chance for Joe Wilson, but his twenty yard effort, with his weaker foot, was only deflected behind for a corner.

The conditions continued to deteriorate, resulting in both sets of players losing their footing. One such instance saw veteran Bishop lose his footing allowing Warrington substitute Josh Amis to get in behind. Getting to the ball first, Amis took a tumble, despite Bishop having recovered the ground well. He made little, if no contact, yet from a good position the referee pointed to the spot for a second time.

Williams went the same way again. Yates guessing right this time, to beat the effort behind for a corner. Interestingly Yates second penalty save in seven days. From the resulting corner, a goalbound effort was brilliantly cleared off the line by the debutant Parkin, who was clattered late by the lunging Roberts. Warrington's skipper shown a yellow card for the challenge that saw the midfielder helped from the field of play.

Gainsborough defended like their lives depended on it, but also asked questions of their own. Late substitute Curtis Morrison posed a test with his direct running, whilst a plethero of corners didn't yield the same rewards as the first of the afternoon and Trinity had to settle for a hard fought point.