The Holy Blues came back from a goal behind to roar to victory in Derbyshire on Saturday afternoon, thanks to a Clayton Donaldson treble and a well taken goal by Scunthorpe loanee Harry Lewis overturning Luke Mangham's first half opener. Two changes to the side that was victorious on Merseyside in midweek, saw Neal Bishop hand starts to Lewis and Isaac Rice. Joe West and Jack Dyche missing out, due to injuries sustained in midweek. Tristan Drummond was named amongst the substitutes, alongside boss Bishop, Hayden Cann and Ethan Bojang.

An engaging opening saw both sides asking one or two questions of the opposition defences. Harry Lewis showing pace and control as he looked to progress down the left. Twice looking for the veteran, Donaldson - and he wasn't a million miles away from connecting. But, Trinity fell a goal behind, former Blue, Brodie Litchfield looked to get on the front foot, and he tricked his way past Prosper Keto and Keto felled the flying winger. The referee quick to point to the spot. Luke Manghan's stepped up, but saw his initial effort from twelve yards denied by the impressive Yates. From the follow up, Yates was again equal to it, helping the rebound onto the post, but at the third time of asking Manghan made no mistake with his third bite of the cherry! In doing so, putting the home side in front, the first goal Trinity have conceded in normal, regulation time, away from home, this season.

Harry Lewis twice went close to a response. A firm effort straight at Daniel Moore was comfortably held before he combined with Fin Shrimpton and flashed a volley narrowly wide of post and bar. Just the response Trinity were looking for, having gone behind. Going behind was to prove another challenge for Neal Bishop's charges. And as it was, proved to be one the Holy Blues were more than capable of rising to. Inside ten minutes Trinity were back on terms, when a long Yates clearance wa 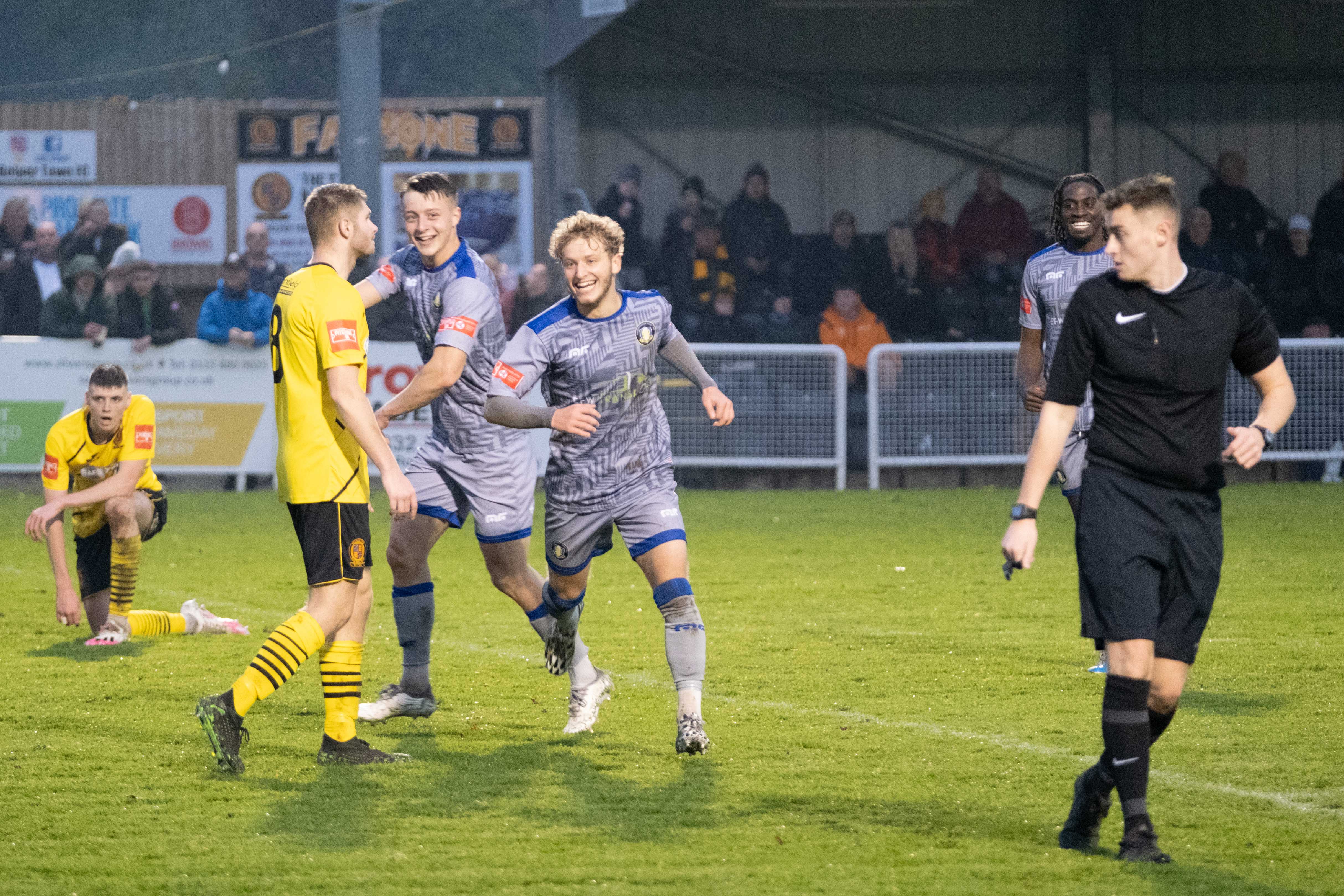 s chested down by Donaldson, into the path of Lewis. As the two players linked to good effect, Lewis showed blistering pace to get to the return ball ahead of the 'keeper. And forcing the error, Belper found their 'keeper on a caution, and back on terms as Donaldson sent the 'keeper the wrong way with his penalty kick.

Belper were looking lively going forwards, and Trinity were struggling to find any real fluidity to their play, but five minutes before half time, Donaldson had his and Trinity's second. Turning home a loose ball in the Belper box with consummate ease after an impressive, jinxing run in from the left from Harry Lewis ended with a charged down shot that looped kindly into the path of the Don.

Less than five minutes into the second half, and Donaldson could have had his third. Played in by Curtis Durose, the veteran front man leaning back just failed to hit the target.

Sent scampering clear, Durose then went for goal with options up in support as the visiting Blues, in grey, looked dangerous every time they attacked. In almost a carbon copy move just moments later, Durose got his head up and rather than shooting, he looked for the supporting runner, his pass just evaded Liam Waldock, but not Lewis, arriving late in the box. His crisp finish giving Moore no chance to the delight of the travelling Holy Blue contingent.

That man Durose was again involved, as with a wave of the wand of the right boot, he struck the foot of the post with the outside of his right foot. Moore motionless, rooted to the spot. After a quiet first half, it's fair to say, young Durose sprung into life in the second period.

On the stretch, Durose poked the ball through to Waldock. And in turn, the productive midfielder slipped Donaldson through. And the veteran timed his run to perfection before firing unerringly past Moore to seal his treble.

Making it seven points from nine since the disappointing home loss to Bamber Bridge, the Holy Blues are up to third in the league ahead of the visit of Ashton United, to the Dave Longstaff Martin and Co Arena next weekend. It's a rare blank midweek for the Blues, which will hopefully give some of our patched-up warriors time to heal and Bish and Stampy time to work on one or two things on the training ground.

Enjoy your weekend folks - and see you at the Northolme next week! Let's make the place a fortress, starting next weekend! C'mon you Blues!