The Holy Blues bowed out of the Isuzu FA Trophy at the First Round Proper stage, losing by the odd goal in five at Lancaster City's Giant Axe. The result not telling the whole story, as Trinity were without the services of eight first teamers, for various reasons. The most notable being the absence of twenty plus goal duo, Clayton Donaldson and Liam Waldock. In all, Blues' boss Neal Bishop made four changes to the starting eleven, but could only name three substitutes as three youngsters from the U21s were handed spots in the match day squad.

Tristan Drummond made his first competitive start for the Blues at right back, with George Hornshaw injured in the midweek draw with Morpeth. His replacement that night, Prosper Keto pulled up in training, meaning the full back who has spent time on dual registration forms at Newark Town, was handed his chance. Mo Gashi and Ethan Bojang were handed starts in the middle of the park, alongside skipper Andrew Wright, while Harry Lewis was tasked with getting up in support of lone front man Jack Dyche. On the bench were Josh Fraiwald and Ethan Cowan, alongside new signing Cody Collins, signed from Mansfield Town on Friday morning.

With the adjustments, and lack of playing time together, for the visitors, it was the hosts who looked to settle the quicker, lining up in a fluent 5-3-2 formation. Sam Bailey for Lancaster was looking to force Joe West back defensively Trinity started a little shakily, taking time to grow into this one. Bailey driving forwards linking with Christian Sloan, the Dolly Blues' left wing back. Sloan forcing Matt Yates into a routine save.

Trinity were being forced to defend with backs against the wall. Young Lewis tried to carry the ball out from the back, but a heavy touch saw Lancaster attack again, with Yates out bravely at the feet of Dom Lawson. Lawson studs up on the Trinity number one, somehow injuring himself in the process. And 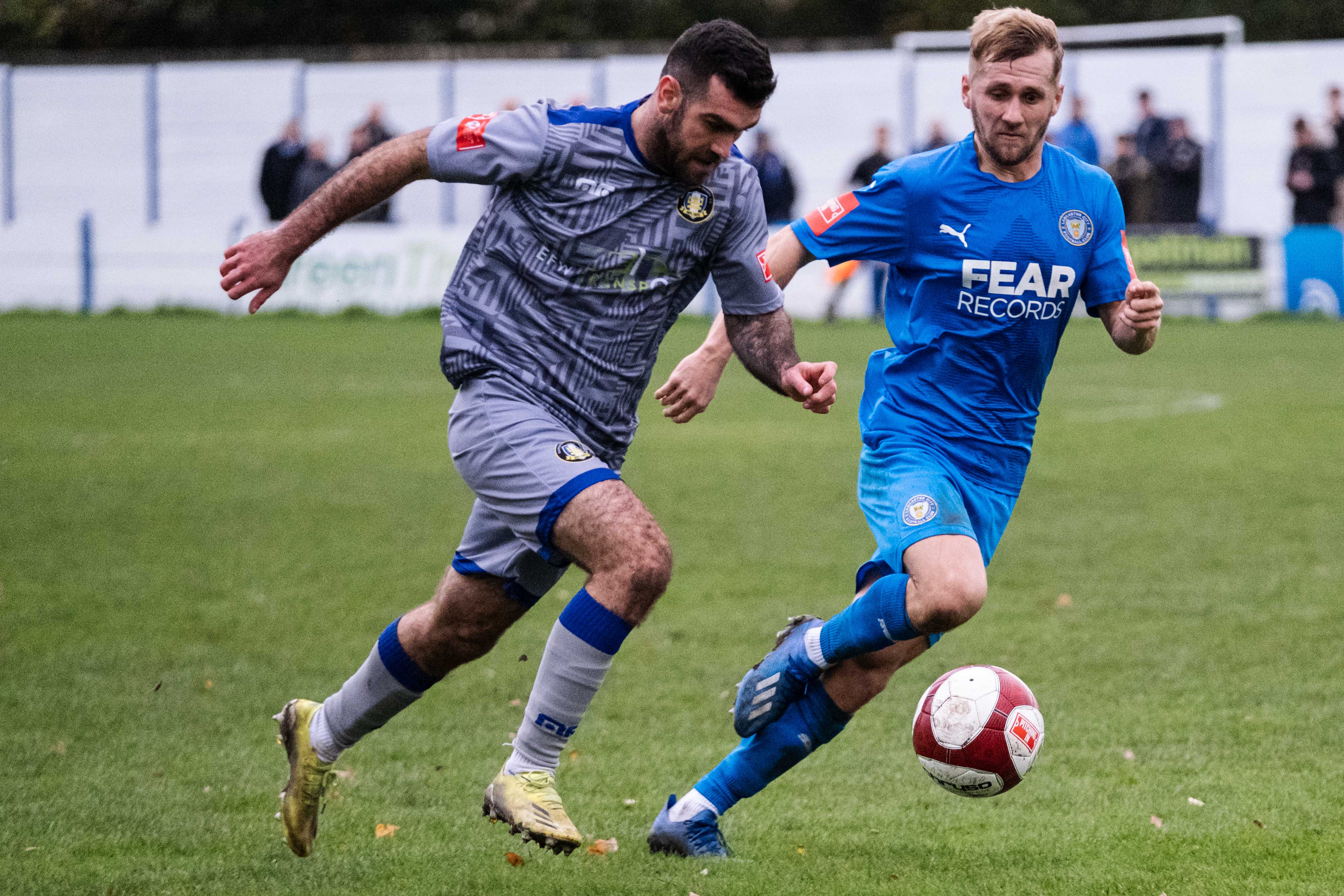 no card flourished towards the #11. A long ball out from the Holy Blues looked like it has been dealt with comfortably by the home defence, the ball played back to 'keeper Sam Waller - but he took a touch too many and was well pressed by Wright. The home goalkeeper tying himself in knots. And against the run of play, Trinity led!

The restart was delayed as Lawson was replaced by Nic Evangelinos. And immediately, Bishop's boys were pegged back. A deep cross was met by a powerful downward header from David Norris that Yates did well to help onto the crossbar, before the ex-Ipswich man and Trinity tormentor in chief, attempted an audacious bicycle kick, which again appeared to be brilliantly blocked by Yates, but as the ball rolled free in the box, the Assistant Referee awarded the goal, to the delight of the home support.

Sam Bailey again got forward to good effect down the right, releasing Norris with a clever reverse ball. Yates stood up well to force the front man wide - and Norris could only scoop his effort over the bar.

At the other end, Jack Dyche did brilliantly to bring the ball down - and turned to release Curtis Durose. The on loan Rotherham youngster catching his strike well to sting the palms of Waller, only for the loose ball to fall away from any supporting Trinity forwards. Brad Carroll conceded a free-kick in a good position, which Bojang delivered. Hayden Cann met the centre, but his header was straight at Waller

Substitute Evangelinos missed a great chance to put the Dolly Blues ahead when Bailey's cross found Sloan, who struck the bar, the ball landing at the feet of the forward, only to get his finish horribly wrong. It wasn't long for the sub to make ammends. On the stroke of half time, he timed his run to perfection. Slotting past Yates to put the home side in front. A poor goal to conceede at the best of times, let alone just before the half time whistle.

Lancaster again looked to get off to a rapid start, but two minutes into the second period Dale Whitman angered the referee. The former Chorley and Alfreton man racing into the box and taking a tumble. Referee Mr Bell booking the forward for simulation. Mo Gashi was next to go into the book, a strong challenge on Bailey seeing the Albainian midfielder pick up a caution for his troubles.

Drummond was replaced by Cody Collins as Bishop looked to change the shape of the visitors, matching up with the hosts formation. A nervy touch saw Trinity forced into defending a throw-in, in dangerous territory. But the Blues switched off, and Sloan at the second attempt was able to fire through a crowded box, past Yates, giving the Dolly Blues a two goal cushion. And the Holy Blues an uphill battle.

Harry Lewis must have thought he'd pulled a goal back for the Holy Blues, but Waller made ammends for his earlier error as he somehow clawed the ball out at the foot of his left hand post. Gainsborough were starting to.ask a few more questions, but were needing to go a little more direct.

Appeals for a foul on Dyche went unheeded - and Durose returned the ball into the dangerzone, where West took a touch, bided his time and found the finish past Waller to get Gainsborough back in the game.

Durose's centre was headed up in the air by Dyche. With the ex-Hyde man getting there a second time, but looping his header wide. With Lewis on hand, a clearer shout may have led to a different outcome. With ten to play, Josh Frailwald came on for his first minutes, having impressed for the U21s. Trinity continued to huff and puff, but Lancaster could have restored their two goal advantage when Allington got free around the back, but thumped his effort wide of Yates' near post.

Joe West combined with Fraiwald. The youngster doing well to get the ball into the box, just evading Dyche who couldn’t get there, and Harry Lewis unable to keep his effort down Lancaster struggled to deal with a deep corner to the back post, and with willing runner Dyche looking to retrieve the ball - and keep the ball in the Lancaster box - he appeared to be nudged in the back - but Mr Bell was unmoved, and maybe unsighted.

With three minutes added at the end of the game, Durose went for glory, but sliced wide of the near post with options to his left. With that, Trinity's hopes of taking the game to a penalty shootout, evaporated. As the saying goes.. we can now concentrate on the league. And there is little time indeed, before we can do just that. Starting on Tuesday night, away at Marine.

We look forward to seeing as many of you as possible, as we look to build on our impressive away league form. But let's hope we have some of the injured players back in the ranks, after another three days of rest. C'mon you Blues!