The Holy Blues had victory snatched from their grasp in second half stoppage time when Harry Nevin fired home an injury time corner to knock Trinity off top spot that was held for two minutes, thanks to Clayton Donaldson's late penalty. Blues' boss Neal Bishop made two changes to the side victorious over Ashton United at the weekend. Hayden Cann coming in for the injured Prosper Keto while Isaac Rice started in place of Club Captain Andrew Wright.

New signing Fraser Preston started on the bench, as the coach arrived in Cheshire to incessant rain that threatened the game reaching a conclusion. Dylan Cogill donned the armband with Wright starting on the bench. The treacherous conditions under foot meant that the visitors had to adapt to a different plan, and it was the Dabbers who adapted to the torrential rain and soft ground the better. The home side's number nine, Daniel Cockerline was a focal point of the home attack, but for the majority of the time he was well marshalled by Dylan Cogill and Cody Collins at the heart of the Trinity defence. As Gainsborough grew into the game, Curtis Durose got free down the right and fizzed a good ball across the face of goal. Donaldson looked to control the ball rather than finish first time, his touch, inviting Booth off his line to smother.

Urvantev won a corner for the Dabbers which Troy Bourne headed goalwards. Yates helping the ball over for another corner as Nantwich looked to sustain the pressure. Joe West was struggling with a knock, but was still able to defend alertly. Clearing a ball away that was set to land on the foot of Malumo arriving late at the back post. Durose was looking to provide ammunition for his team mates, but last ditch defending saw the visitors having to be content with nothing more than corner kicks.

Out of nothing, Donaldson 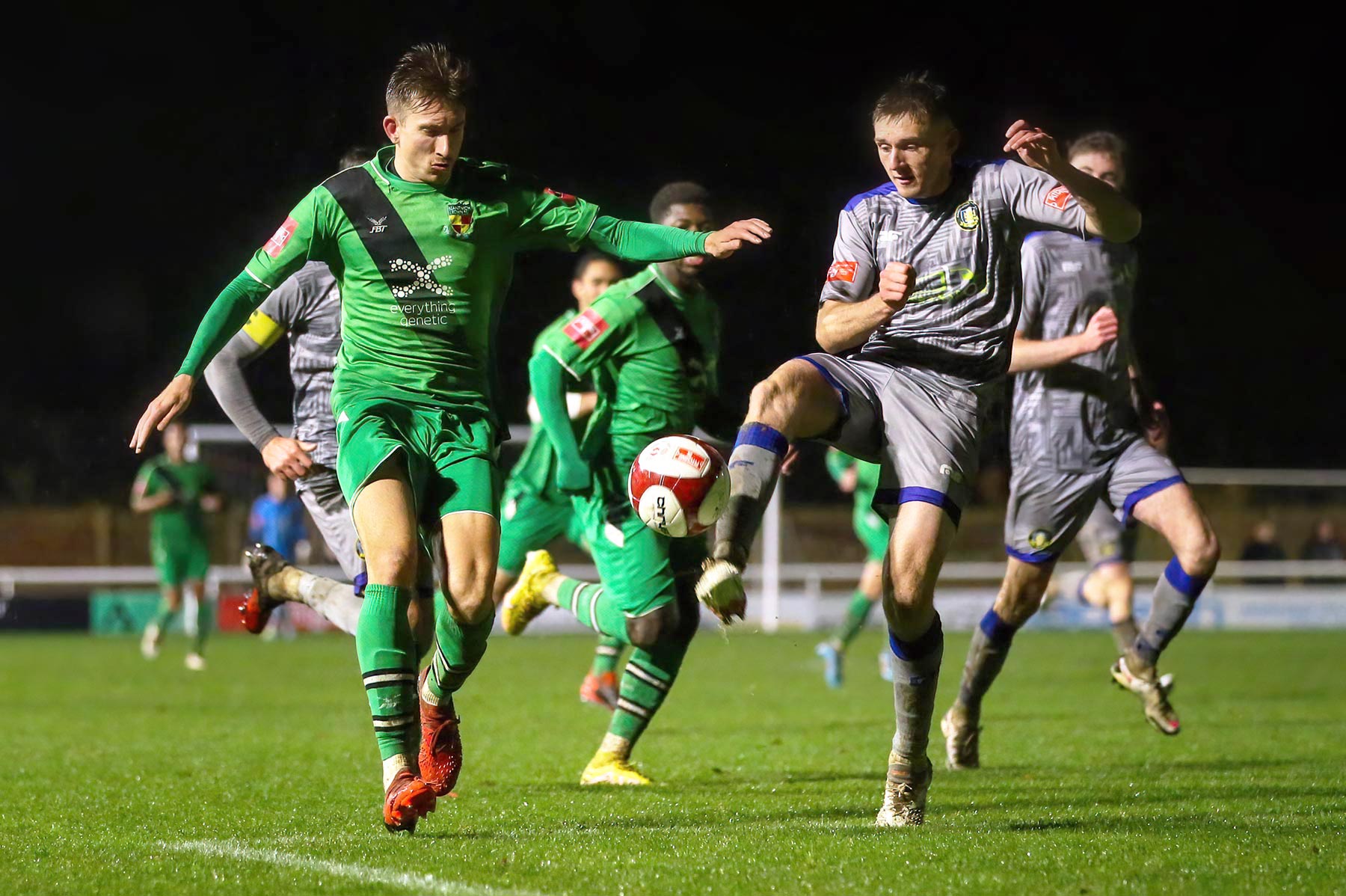 worked a shooting opportunity onto his right foot. Shooting across Booth, the Nantwich 'keeper gathered at the second attempt, with Trinity on the lookout for any sustained spill, aided by the greasy surface. With West unable to continue, Fraser Preston was handed his opportunity. And following a reshuffle, the new signing from Alfreton looked to get amongst things. Breaking in behind, as Donaldson appeared to be pushed, Preston looked to stretch the game.

The early signs of interplay between Preston and Donaldson was looking good, as Fin Shrimpton and Liam Waldock tries to find a winning combination to the Nantwich lock before half time. In truth, the Blues were in it at the break, and that's the very least Bish and Stampy would have wanted at 7.45pm.

The rain began to subside as the teams re-emerged for the second half, and Trinity really started to get a grip of the game. But the match was still susceptible to the odd error or three, with standing water, and tricky conditions under foot hindering a quick turn and any attempts at neat one touch flowing football. Casper Hughes looked to catch Yates out with an effort from range, which flew narrowly over the top.

Fin Shrimpton looked to apply the finishing touches as the ball landed invitingly, but the slightest of deflections took the ball away. As the grey shirted Blues looked to press, the Dabbers struggled to clear a corner. And Hayden Cann hit the target, only to see his effort well held by Booth between the sticks. Trinity were looking to impose themselves on the game, and started to get the upper hand. Donaldson, cutting in from the right, let fly, half a yard wide as the front man couldn't bring the ball back.

Trinity's defence stood firm, stopping a cross in, behind for a corner. The corner turned wide of the near post, before Donaldson and Preston combined. From Yates' goal kick, Donaldson found the debutant raced through, only to be beaten by the pitch, as he opened his body to place his finish, the ball flashed agonisingly wide of the left hand upright. Harry Lewis was beginning to have more of an influence down the left, linking with Preston, Lewis was sent to ground right on the edge of the box. His freekick was charged down by the wall.

Trinity were having large chunks of the ball, but were just struggling for that final ball at times. With two minutes of normal time remaining on the clock, good service into the feet of Donaldson helped the Blues build momentum, as Trinity moved the ball from right to left. A clever ball inside the full back allowed Lewis to commit his man and draw the foul. The referee after a moments pause, pointed to the spot. Ice cold, Donaldson stepped up to send the 'keeper the wrong way.claiming his 16th of the campaign.

Going behind sparked a response from the Dabbers. And last ditch defending saw Trinity concede a couple of late corners. Trinity looked to soak up the pressure and made a change to run down the clock, but in the end, Bishop's men couldn't clear their lines from a corner. Yates punched away, but the Dabbers twice had efforts on goal, the latter from centre back Harry Nevin finding the bottom left hand corner through a plethora of bodies amassed in Matt Yates' eighteen yard box. Trinity had led the game - and the league for a couple of minutes.

But Nantwich's late leveller put a dampener on an already wet evening. The Blues matched the recently set sequence of away league games without defeat, but will be wanting to set a new record, with the continuation of the unbeaten run on Saturday when we travel to FC United of Manchester.