The Holy Blues finished the day on top of the pile in the Pitching In Northern Premier League, thanks to a magnificent performance on the road, to claim all three points and stun the majority of the 1,800+ crowd, with a supreme display away from home. An impressive result and performance on its own, with three different goal scorers typifying the confidence, verve and vigour in this exciting young side. It may only be November, and having reached the summit, the hardest part is going to be staying there… but everyone associated with Gainsborough Trinity is certainly enjoying the ride!

Trinity boss Neal Bishop was able to name an unchanged starting eleven from the midweek draw at Nantwich, with full back Joseph West fit to start after being forced off in the first half on Tuesday night. George Hornshaw returned to the matchday sixteen, as Bishop stood down. Dylan Cogill again donning the armband. Gainsborough started brightly with a high press looking to force errors in the FCUM back line, and when, Trinity won the ball back in the opening couple of minutes, the home side were unable to fully clear their lines from a Cody Collins long throw. Hayden Cann hitting the target from twenty-five yards. It was comfortable for Dan Lavercombe, but it was a warning nonetheless, that Trinity weren’t here, just to make up the numbers!

Matt Yates was called into action as Regan Linney switched the FC United attack from left to right, picking out Callum Gribbin, the left-footed right winger cutting in, and testing Yates who got a strong block in. Cann quickly on hand to clear away the danger. The Holy Blues (in grey) were working hard to stifle the home side, but at the same time were not dominating possession for long periods, instead inviting the home side to have more of the ball.

Linney, the league’s leading marksman was looking lively, but he was being forced to work the channels to find space, with Collins and Cogill making things tough. Harr 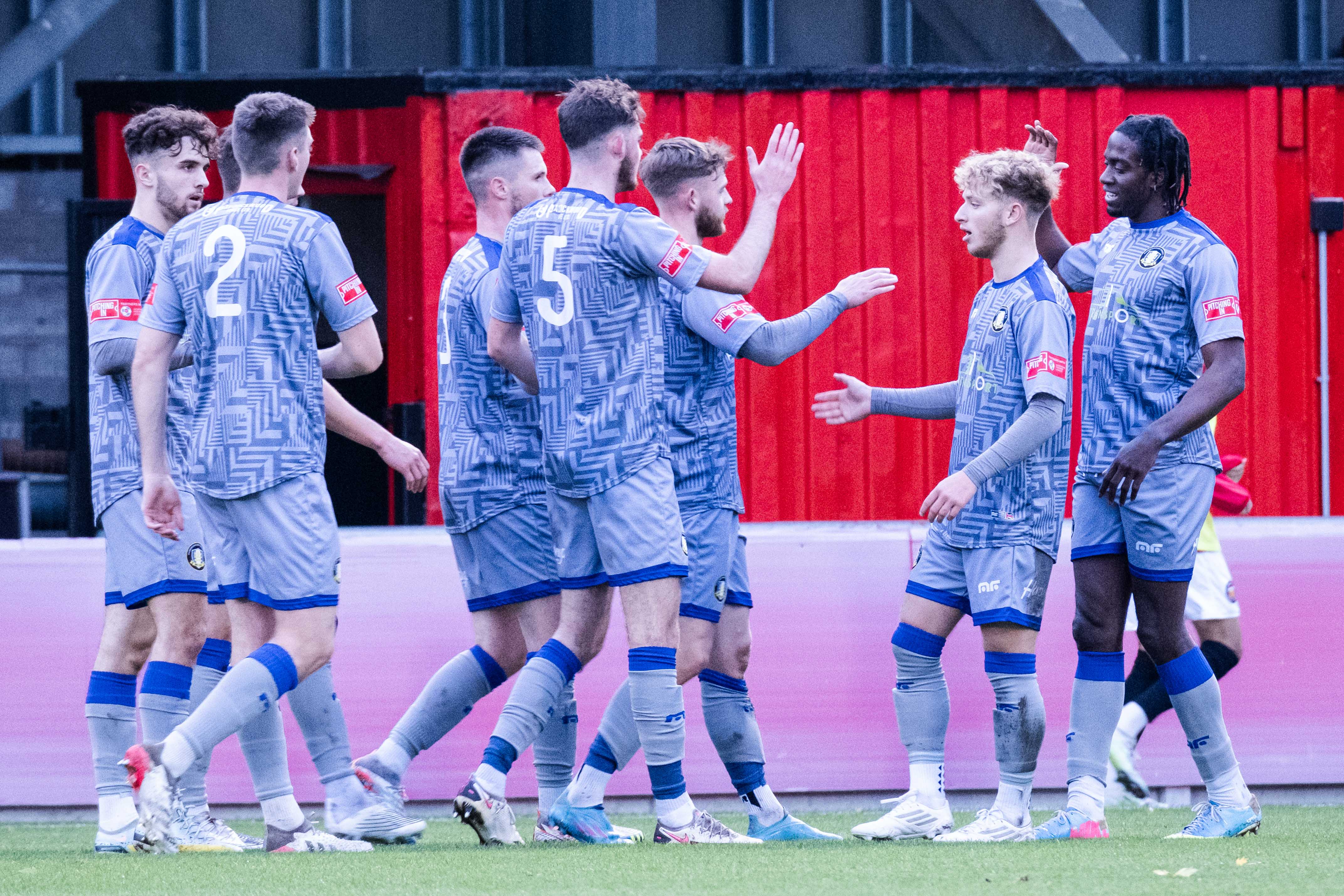 y Lewis was inches away from converting Curtis Durose’s ball across the six-yard box, after Donaldson had released Durose in behind Finlay Armstrong, as the visitors again looked dangerous.

Cogill went direct, picking out the run of Donaldson in the left hand channel, with the front man using all of his experience to find Lewis’ darting run into the box, and with a favourable deflection, the on loan Scunthorpe leftie found Liam Waldock, who took the ball under his spell, bought himself half a yard and curled in past Lavercombe, to put Trinity a goal to the good on the quarter hour mark.

A controlled passage of play sprung to life when Rice stroked the ball out to Cann to gallop down the right-hand side and trick his way inside his opposite number. His cross found Donaldson ahead of the near post, but Durose wasn’t quite on the same wavelength to gauge the direction of the flick. Armstrong then crossed from the left for the Rebels, with Gribbin helping the ball onto Linney. Out of nothing, Linney fashioned a left footed shooting opportunity that flew narrowly past Yates' far post.

That man Linney again looked to pose a threat down the Trinity left, as he managed to find Stanley with a low ball into the box, Collins doing enough to throw the forward off his stride as he tried to divert his effort goal wards. The game was being played at a frenetic pace, but the Gainsborough defence were standing firm. Except when Griffiths’ chipped ball deceived the Trinity back line – and Linney had the whites of the goal in his gaze. Yates had other thoughts in his mind, with his angles perfectly covered, he diverted the forward’s right footed effort behind for a corner, that was dealt with. Soon after, Stanley took aim from twenty-five yards, but saw his effort sail harmlessly over the top.

The Rebels started the second half seeing a lot of the ball, but the threat was shackled by the Gainsborough back line. Forcing the FC runners to be overzealous with their runs in behind. And when Cann released Durose down the right six minutes into the second period, Durose found Waldock on the edge of the area, Gainsborough’s midfield dynamo quickly adjusted his feet, to free Harry Lewis, with fleet-footwork, Lewis bought himself a yard and drilled crisply beyond Lavercombe to double Trinity’s advantage.

Just before the hour mark, a scratch your head moment occurred. The Holy Blues were awarded a free kick. Yates came out to take, appearing to play the ball, he returned to his eighteen-yard box, as skipper Cogill thought he was about to take the free-kick. Linney stole the ball and looked to roll the ball into the unguarded goal – only for Cody Collins to clear off the line. Both sides were incensed. Cogill proclaiming his innocence. Linney demanding a red card. Referee Lee Hibble awarding a corner and pointing to the man on the line as he cautioned the Trinity skipper. Yates claiming the resultant corner comfortably.

On the hour, former Trinity man Alex Wollerton was replaced by Dontai Gabidon, and it took the youngster less than sixty seconds to announce his arrival. Andy Halls was afforded too much time to bring Yates clearance out of the sky, he gave the ball to Gribbin, who’s chipped pass over the top found the substitute, and despite his first touch taking him wide, he found the finish to halve the deficit.

Regan Linney then looked to win a penalty as he went to ground under the watch of Collins, Gabidon then brought the best out of Yates as he jinked in from the left and curled right footed, Yates getting the faintest of touches on the finish to help the ball onto the cross bar – and away.

The Blues responded with a reshuffle of our own, with Hornshaw on to replace Collins. Cann moving to centre half. And just as a change saw a goal for the hosts, a change led to a goal for Trinity – and Curtis Durose restored Gainsborough’s two goal cushion. Waldock broke up the play and Rice kept the ball moving. Shrimpton got his head up to see Durose motoring down the right and split the defence wide open with a great ball, and with plenty of sauce, Durose chipped the stranded Lavercombe to stun the home crowd.

The two FC United substitutes combined when Michael Potts switched the play out to the right, where Gabidon looked to come in on his left foot, but Yates had everything behind his effort. United made their final change when they sacrificed a full back, for Max McCarthy, a big powerful unit. And it wasn’t long before he was involved, joining in from right, he fired in a ball that Yates gathered well at his near post, despite the best attempts by Linney to distract the Trinity number one, as he slid in, looking to add the element of confusion.

Donaldson saw a half chance shave the outside of the right hand post, after substitute Fraser Preston helped on Yates' long clearance, the veteran front man, not able to make the net bulge this time! Soon after, Preston, Waldock and West combined down the left, only to see West’s centre headed away.

Gabidon released McCarthy down the right, but his powerful effort from the angle was comfortably held by Yates down to his right. And with Hayden Cann three times in the right place, first to cut out a Regan Linney centre. Taking the sting out of the forward’s cross to enable Yates to gather safely, before heading clear twice in quick succession from balls delivered into the mix, Trinity were able to see out the closing stages comfortably.

An entertaining game, in front of a bumper crowd, each and every Trinity player put in a shift to be proud of, and rightly celebrated with supporters at the end of the game. A huge three points, over a side that will be there, or thereabouts come what May – but Neal Bishop’s Holy Blues are also showing that they shouldn’t be underestimated either. It’s on to Radcliffe next, as we return to the Dave Longstaff Martin and Co Arena on Saturday… whether we are still top of the table when that game comes around or not… that’s out of our hands, but for now folks, enjoy your weekend, as the league certainly looks better from up here!