The Holy Blues fell to a disappointing defeat for the second time in three away games as they returned from the longest away game of the season empty handed. Two goals in ten minutes midway through the first half giving Neal Bishop’s men a mountain to climb. A mountain that the Blues, in grey, were unable to overcome. Jay Glover came in for his first start in Trinity colours, the one change to the starting eleven that had found themselves three down, before the second half comeback last time out. Club Captain, Andrew Wright missing out through injury, as Isaac Rice dropped to the bench. Jack Dyche was named amongst the substitutes as he steps up his return from injury, while new recruit Jamie Bramwell was also on the bench for the game against the side in eighteenth.

The hosts started the game as they would mean to go on. Solid, strong. And hard to break down. Allowing the visiting Holy Blues time on the ball. Drawing Trinity on, and then looking to counter attack with pace. Ben Ramsay and Jack Foalie willing outlets on the flanks. And it was on the turnover where Morpeth looked the most threatening, with Trinity being cut open countless times in the opening ten minutes. Andrew Johnson twice going close before at the third attempt, he had the beating of Matt Yates.

Sloppy play saw Trinity masters of their own downfall. On the back foot, Matt Yates struggled to clear his lines following a Joe West backpass and Trinity were behind. Despite an initial brave block by the two converging centre backs, Sam Fishburn was able to step across on loan Lincoln City centre back Hayden Cann, preventing the stopper from putting in a challenge on the goal scorer – and despite the protests of the visitors, the goal was allowed to stand.

Curtis Durose & Fraser Preston switched flanks as Gainsborough looked to gain a foothold in the game, but lacking the final killer ball, the pair struggled to really get into the game. George Hornshaw looked to get Trinity moving, driving forward into the area, he had to check back, but the Blues lacked the thrust, as Preston found Glover and Trinity were forced back to halfway. The patient build 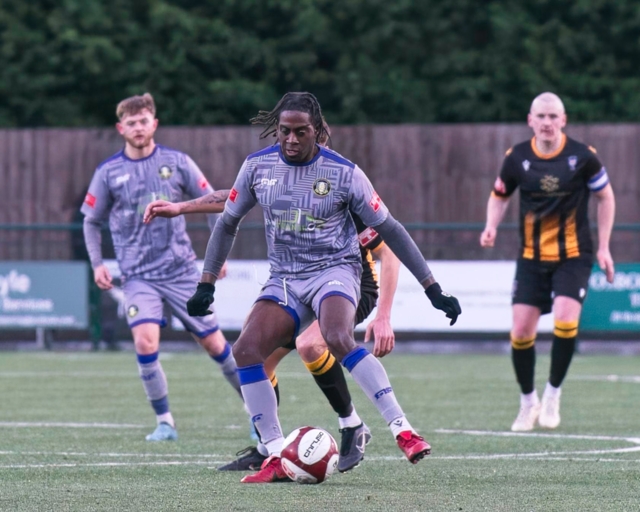 up did in the end yield a first shot on target- Cogill seeing his strike from range blocked unconvincingly by Lowson. No forward following in to try snaffling the rebound.

The home side's physicality was causing some contention amongst the visiting support. When Bailey Conway appeared to be caught in midfield, play was allowed to continue. And when play was allowed to evolve, opening scorer, Johnson, was able to raid down the right. Cann's headed intervention looked to have diverted the danger, but Ben Ramsey, arriving on the overload, had far too much time to pick his spot, bending past the despairing dive of Matt Yates in the Trinity goal.

Hornshaw and West looked to provide ammunition from the flanks, getting forward on the overlap, only to see their crosses cut out, before they really entered the dangerzone.

A short spell seeing balls into the box, but wrong choices saw the Holy Blues unable to pick out runs, and the usual lung busting runs into the box missing... It cut for a frustrating afternoon for the travelling Trinity faithful. In the opening period, Yates was certainly the busier of the two goalkeepers, called into action to deny both Foalie and Johnson.

It wasn’t through a want of trying, but things just weren’t clicking for the Holy Blues. Something was missing out on the pitch, and Trinity were just not able to break down the Highwaymen.

Forced to shuffle his pack at the break, with the loss of Waldock through injury. Isaac Rice was introduced, coming on at left back, to make his fiftieth appearance for the Holy Blues. West was moved into midfield, as Preston was moved further forward, The second half saw Morpeth on the front foot immediately, as Jack Foalie saw his appeals for a penalty waved away after a coming together with substitute Rice.

With Donaldson being forced to drop deeper in search of the ball, Durose was able to force a save out of Lowson after the Rotherham winger was able to dance inside and fashion a shooting opportunity for himself. As the Blues looked to add some pace and directness, Conway was replaced by Prosper Keto and shortly after the flying full backs’ introduction, the visitors thought they had one back. Fraser Preston’s inswinging corner was only partially cleared as far as Cogill, who saw his effort clawed away at the second attempt by the scrambling Lowson. Appeals from the visiting support behind the goal, unheeded. And as the hosts threatened to counter, good tracking back from Keto ensured the Blues didn’t fall further behind.

Again, dropping deep, Donaldson released Durose down the right, as he made progress into the box, he went to ground under pressure from the Morpeth centre back Turner, but again, the referee was unmoved.

Foalie continued to provide the outlet on the Morpeth right, flashing a cross shot half a yard wide of the far post. Jay Glover then looked to catch out Lowson, but the home ;keeper helped the ball over the top. And twice from the deadball, Trinity failed to deliver quality service to the men up from the back.

Bramwell was thrown on for the final twenty minutes or so, and looked to get Trinity ticking, spraying the ball out to the left and right, with a good range of passing. A 360 degree spin on the ball – and ambitious shot from 25 yards whistled a yard wide of Lowson’s goal.

To the end, Trinity struggled in the North East, and Morpeth proved too much of a tough nut to crack. With results at the top going in our favour, the result on the face of it, appears to be a glorious missed opportunity, though in fact, it brings the chasing pack right back into an elongated title and play-off chase, with three wins separating second to eleventh! There are certainly going to be plenty more twists and turns as the league continues to hot up – stick in there – and keep on, keeping on!

Photos courtesy of George Davidson, a link to his album here