Insane. The Holy Blues just don’t know when they’re beat. Visits to Marston Road rarely see Gainsborough return to Lincolnshire with all three points, in fact, the last seven league games between the sides have ended in stalemate – and after fifty-five minutes – you would be forgiven for thinking that today was going to be even worse… fast forward thirty-five minutes – and Neal Bishop’s young group defied the odds and secured an impressive victory.

There was just one change to the starting eleven, as Isaac Rice replaced Charlie Carter in the engine room, alongside Bailey Conway. Jay Glover, the midweek loan signing from Sheffield Wednesday, starting on the bench, as he continues to familiarise himself with his new teammates. Young Under 21 goalkeeper Ethan Cowan was the other face on the bench. Despite persistent overnight rain, the Marston Road playing surface was surprisingly playable, though difficult under foot, it made things difficult for both sides, but perhaps hindering the Holy Blues, in grey, a little more in the first half.

Stafford started the game, adjusting to the conditions a little quicker and following a long clearance from Cameron Belford, Callum Saunders shot wide, Saunders was again on hand shortly afterwards as he flashed a rising effort beyond Yates’ far post. Kaiman Anderson then went closest to giving Stafford the lead, when a long ball found the former Shrewsbury Town youngster. But Matt Yates was out quickly, and Anderson’s lifted effort didn’t have enough purchase to trouble the Gainsborough number one.

Clayton Donaldson, Curtis Durose & Liam Waldock looked to link up, down the right, but Waldock couldn’t get a telling touch, with Belford gratefully grabbing.

Luis Morrison then got on the end of a deep right wing cross, but could only plant his header wi 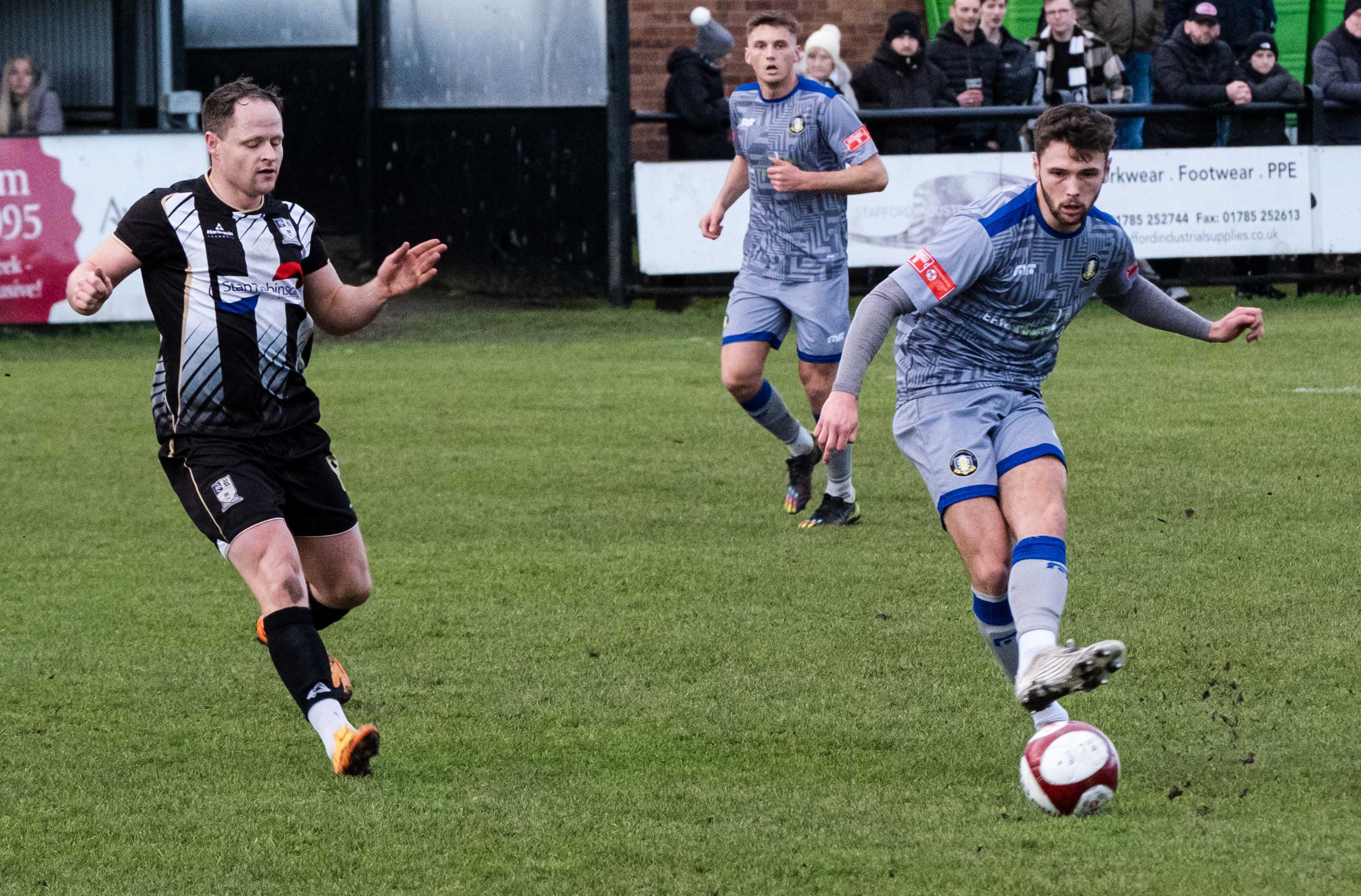 de of the post, with Gainsborough caught napping Trinity were struggling to really assert themselves on the pitch, but Fraser Preston almost managed to burrow his way into the box. Unfortunately, as he feinted left and right, and left again, he was unable to get enough purchase on the ground as he looked to pull the trigger and was quickly denied by the smothering Belford.

Ten minutes before half time, and Stafford dangerman Anderson found himself in the referee’s notebook, looking for contact, the forward tumbled. Deemed simulation by the man in the middle – and a let off for the visitors. Shortly afterwards, Bailey Conway picked up a caution for a robust challenge in the middle of the park. The roar of the home support beginning to crank up as they were feeling a touch hard done by, not having the opportunity from the spot given to them by the referee.

However, on the stroke of half time, the referee did point to the spot, when Willis was adjudged to have been sent tumbling. And with almost the final kick of the half, Tonks kept his composure to send Yates the wrong way from the penalty spot.

A tight first half, if ever there was. Nobody could predict the fireworks that were about to be bestowed upon the 800+ crowd. Trailing by a goal to nil at the break, Bish & Stampy’s side would have felt they were in the game… but two goals in nine second half minutes looked likely to have obliterated that belief. Just seven minutes into the second period, a Tom Tonks missile wreaked havoc in the Trinity penalty area, with centre half Luis Morrison, up from the back, getting the decisive final touch, after what seemed like an age for the ball to be dried by a conveniently placed towel for the Stafford talisman’s use.

Falling further behind, Bish quickly made a double change, changing the central midfield duo. As Andrew Wright, and Glover for his debut entered the fray. The duo had barely set foot on the Marston Road playing surface, when Tonks quickly released Saunders down the left-hand side, and the former Nantwich Town and Witton Albion forward selflessly squared for Anderson, to put the home side three to the good.

Gainsborough rallied, and as Wright & Glover began to reclaim control of the midfield, the tide began to turn. Waldock was felled as he looked to fashion a shooting chance, in the penalty area, and as Glover blazed the loose ball over the bar – Mr Allsopp indicated play on, advantage over and goal kick, in a split second. Failing to award the most blatant of penalties. This decision incensed Blues’ boss Bishop, who was subsequently sent from the dugout.

Three down, key decisions going against the visitors and without the manager in the dugout, you really would be forgiven for thinking game over. But nobody in the visiting camp had read that script.

George Hornshaw got the Trinity breakthrough, when he reduced the arrears with a fine twenty-yard strike that gave Belford no chance. Initially passing up the chance to shoot just moments before, the ball fell invitingly – and he didn’t need asking twice!

Trinity clawed their way back into the game more, when Cann got on the end of a precision Fraser Preston centre, Hinds unaware of the centre half’s presence, getting round at the back post – and at this point, the Trinity faithful could start to believe…

Cann was composed and helping the Holy Blues to build through the thirds. His calm ball starting a scintillating counter attack, Glover getting on the ball and slipping a perfectly weighted ball, through the eye of a needle, to Waldock, who made no mistake, cool as you like, slotting past Belford

Things were really starting to bubble, as a couple of cards were issued, as the visiting Blues looked to continue the forward momentum that was too much for the hosts – and when Glover released Hornshaw to cross first time, Donaldson for the first time all afternoon broke free of the shackles placed on and around him by defensive duo James O’Neill and Luis Morrison, to head past Belford – and well and truly turn the game, on it’s head!

The Holy Blues had to battle hard and show tremendous mental strength to come back from three down. The eighteen-minute four goal salvo, an awesome display of attacking intent, coupled with courage, fearlessness and togetherness, all sure to make for a bouncing coach journey home! Two sessions on the training ground now, are followed by next Saturday’s trip to Morpeth Town. After today’s performance – who’s following the Blues, in grey, on our next adventure?