The Holy Blues are hopeful of the game against Marine going ahead, after the fourth postponement in seven attempts since December 3rd saw Trinity’s Lincolnshire County Cup clash with Grantham fall victim of the elements. A patchy fixture schedule that has seen Trinity’s form take a hit from the high standards Neal Bishop’s men have set for long spells of this season. With a few injuries within Bish’s small squad, the loss of the Grantham game in midweek could prove to be a blessing in disguise as we welcome out of sorts Marine to the Dave Longstaff Martin and Co Arena. Saturday, 3pm.

Trinity held on to third spot in the table with the only game of the midweek fixture schedule in the Pitching In Northern Premier League to go ahead – Atherton Collieries vs Warrington Town ending in a 1-1 draw. Warrington leaving it until the 88th minute to snatch a point. That point taking the Yellows level on points with the Holy Blues. Trinity remaining in third, courtesy of our superior goal difference and virtue of playing two games fewer.

The Blues will be hopeful that midfield maestro Liam Waldock will be fit to start after being forced off at half time in the 2-0 defeat away at Morpeth last time out, the former Sheffield Wednesday youngster has been in fine form in the Trinity engine room, and will be a key cog in the middle of the park as Gainsborough look to make it back to back home wins. And a third in four on the Northolme.

Versatile George Hornshaw is in line to make his 50th league appearance against Marine, following hot on the heels of Isaac Rice who reached the same milestone last weekend. Since arriving from Farsley Celtic for his third spell at the club earlier this season, Hornshaw has appeared in the full back and wing back positions as well as in midfield. And his recent goal against Stafford Rangers sparked the fine come from behind victory!

One win in seven games have seen Marine slip to tenth, but still only six points 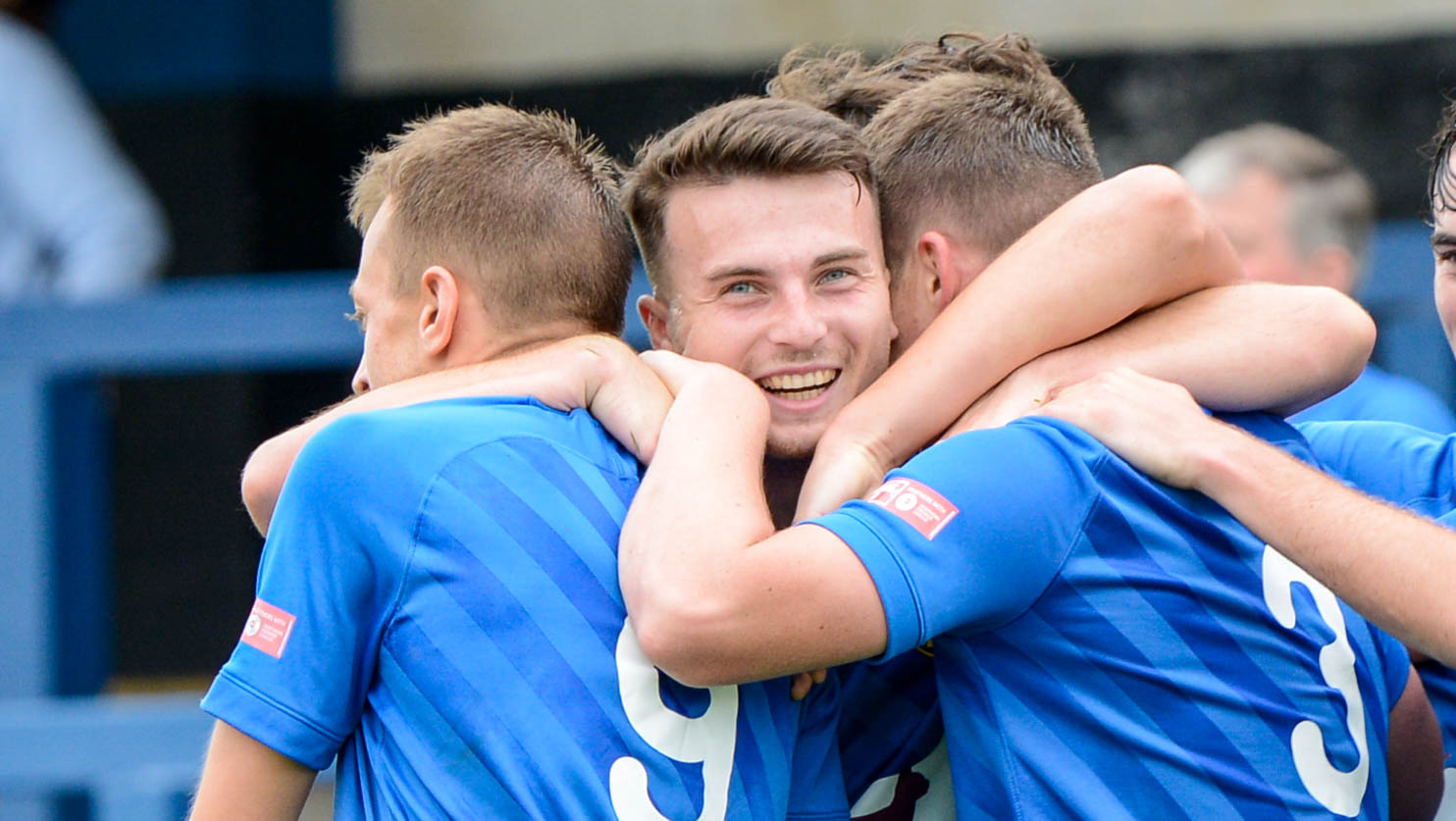 off the play-offs, but since their promotion, under the guidance of manager Neil Young, our visitors have adapted well to the level once again – and will be a threat. Looking to avenge Trinity’s victory at Marine Travel Arena back in October, when Curtis Durose struck two of his nine goals, so far this season, during his productive loan spell from Rotherham United.

In Marine’s twelve games away from home, in the league, they have won four, drawn five and lost three, losing 2-1 last time out, against South Shields at Mariners Park. Their goal scorer that afternoon, and leading marksman for the season, Hayden Campbell, has since joined Curzon Ashton in the National League North. A big blow to the Merseyside based side.

A special shout out to our wonderful sponsors for this weekend’s game. Those who will be enjoying a delightful meal with Geoff Holmes in the Blues Club, pre-game, before watching the game and selecting their choice for Man of the Match afterwards.

There's also a mention to young George Green, who will be hoping to be a lucky omen for Bish's side as he leads out his hereos at five to three! We hope you have a wonderful afternoon with us, George! Please get in touch via social media, or through the contact page on the website if you are interested in sponsoring the Holy Blues - either in terms of a matchday package, sponsor board.. or even something a little grander. Get in touch, we can't wait to hear from you!

A limited number of printed Matchday Programmes have been produced for the fixture, priced at £2.50. In this edition, from within the dressing room with skipper Andrew Wright and flying full back Prosper Keto. Steve Andrews and Pip Anderson dive into the archives to take a look at all things Trinity related from years gone by, with their Under the Bed and Trinity A-Z articles, respectively. There are also photos packed in from Kate Simmonds, Russell Dickens & George Davidson.

On loan Lincoln City defender Hayden Cann is the cover star this week... plus, all the stats, facts and figures from the campaign so far! It's certainly not one to miss for the collectors out there! Anyone unable to get hold of a copy, please contact our friends at Matchday Creative to buy your copy, with of course, all proceeds going to the Holy Blues!

There is a full schedule of Pitching In Northern Premier League action planned for Saturday, with sides around us all at home, South Shields and FC United of Manchester perhaps the pick of the bunch, after South Shields lost one nil to Guiseley last weekend, while FCUM were sharing eight goals with second placed Hyde United. Matt Hill will be looking for a reaction from their 2-0 defeat at the hands of Matlock Town last time out, when they face Hyde. And Warrington Town entertain Whitby Town at Cantilever Park. The scheduled fixture list in full is here: