The Holy Blues are in Lincolnshire County Cup action on Tuesday evening, at The Meres. Kick off at 7.45pm at the South Kestevan Stadium, home of Grantham Town in a fixture that sees the winner face off against League 2 side, Grimsby Town. Dangling the carrot of the Mariners in the next round, both sides will be keen to progress, with the hope of a decent crowd in the next round. Baring that in mind though, Trinity boss Neal Bishop is looking to use this game as an opportunity to get minutes into the legs of those who perhaps haven’t featured as much recently, giving his squad the opportunity to stake a claim for a first team spot in the upcoming league games.

In full, this is what Bish had to say, “We'll use the game to give some players minutes, that we think need a run out. It's also a good chance to bring in some of the U21s, so they can see how we do things. It's a good opportunity for certain lads to come in and stake a claim for a starting place against Marine on Saturday.”

Looking to bounce back from recent disappointments on the road, the game perhaps comes at the wrong time with Neal Bishop and 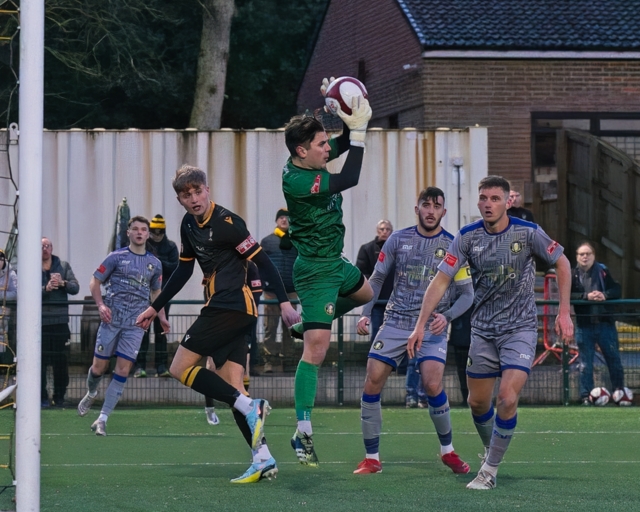 Grantham haven’t been in action since Bank Holiday Monday’s 2-0 defeat to runaway leaders’ Worksop Town. Their game at the weekend against Grimsby Boro falling victim to a waterlogged pitch. Following their relegation from the Pitching In Northern Premier League, Premier Division last season, Grantham have struggled to adapt to life in the East Division, currently finding themselves just outside the automatic relegation spots, but four points from safety,

Amongst their squad for the New Years’ game against Worksop, were a number of recognisable names, with Jonathan Wafula & Charlie Jemson an unused substitute, two former Trinity players in their sixteen. Ashton Hall scored twice in the Easter Monday fixture last season, while other names that stand out, are former Boston full back Matt Tootle – and ex Nottingham Forest striker Nathan Tyson.

With snow forecast over the coming days, we will endeavour to keep you abreast of any developments at the Meres, across our social media channels, but we are planning that it will be business as usual from Bish and the boys!

There will be no commentary of the game on Tuesday night, but normal service will resume, when we return to league action at home to Marine on Saturday.

Admission to the Lincolnshire County Cup tie have been priced at £5 adults, £3 concessions, with Under 14s free, as per the details on the Gingerbreads' social media posts.

It's your Tuesday evening fix, at bargain prices - where hopefully you can see the Holy Blues return to winning ways!

Meanwhile, as the Holy Blues are looking for bragging rights in the Lincolnshire County Cup, there are several fixtures in the Pitching In Northern Premier League, that could alter Trinity’s league position. Here are those games worth keeping an eye on...

Images thanks to George Davidson at Morpeth