A disappointing defeat in the BetVictor Northern Premier League for Gainsborough Trinity as the Holy Blues lost 2-4 at the Gainsborough Martin & Co Arena. A first half David Norris hat-trick all but secured all three points, though second half strikes from Brandon Horton and Curtis Morrison offered some hope for Trinity, it was ultimately an afternoon to forget for the Trinity faithful.

Rocked by injury and suspension, Gainsborough Trinity were forced into a handful of changes. Defensive lynchpin Nathan Stainfield wasn't fit enough to start, forced to watch the game from the bench, while 'keeper Joe Green was dropped to the bench, handing Callum Fielding his first competitive start for the Holy Blues. Forward Gavin Allott missed out with a knock. Simon Russell was restored to the starting line up, as Liam King tweaked his formation, while new loan signing Branden Horton started as substitute as Thomas Davie replaced the suspended Jamie Green.

Trinity struggled to get a grip of the game in the opening exchanges and were blown away as Lancaster City's veteran midfielder David Norris scored a first half hat-trick, to put the Dolly Blues in the driving seat at the interval. Sam Ashton in the visitors goal somehow managed to turn a Thomas Davie downward header over the bar from a Harry Middleton corner, but from a Samuel Bailey corner for Lancaster, Norris had the easy task of nodding in Glenn Steel's header back across goal.

With Gainsborough searching for an equaliser, neither Ashley Worsfold or Kingsley James could profit from Ross Hannah's perseverance down the Trinity right. Lancaster hit the Holy Blues on the break, Jason Walker carried the charge, before holding up the ball, squaring to Norris who slotted home to double the Dolly Bl 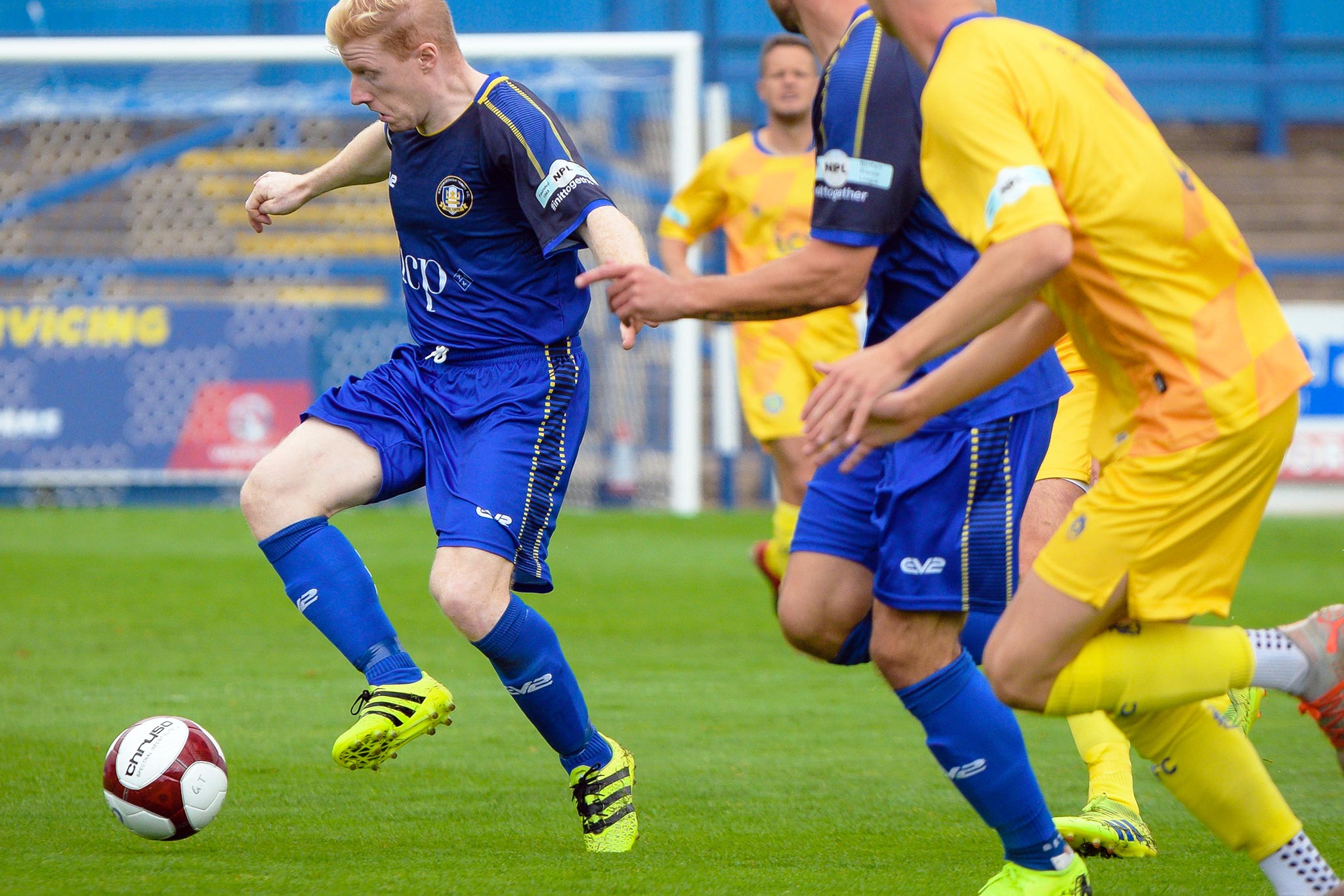 A scuffed clearance found its’ way to Norris, who exchanged passes with Matthew Blinkhorn, to complete his hat-trick four minutes before half time, a placed shot from the edge of the area giving debutant Callum Fielding no chance. Half time Gainsborough Trinity 0 Lancaster City 3.

In the second half Trinity rallied, loan man Brandon Horton looping a header onto the top of the net, shortly before rifling high into the net to open his account for the Holy Blues. His rising effort leaving Ashton grasping at thin air.

City quickly restored their three goal advantage though, when indecision in the home defence enabled Walker to take full advantage, lifting a precise effort over the stranded Fielding.

Despite Luke Thompson picking up a second yellow card for a foul on Ashley Worsfold, Trinity struggled to impose themselves on the game, although Curtis Morrison did reduce the arrears with the goal of the afternoon. Picking the ball up on the right hand touchline, the former Guiseley flyer drove inside and smashed an unstoppable finish off the inside of Ashton's post.

The ten men of Lancaster though, were able to see out the game, as the Holy Blues slipped to 17th in the early season BetVictor Northern Premier League Table. Full time: Gainsborough Trinity 2 Lancaster City 4.